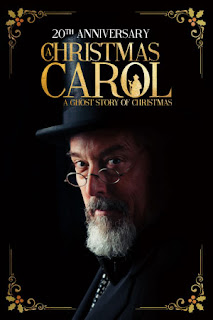 There are many different ways of measuring and evaluating a theatrical production. With regard to the current production of “A Christmas Carol” up at Hartford Stage under the brisk direction of Rachel Alderman, I will use the “Bounce/Gasp/Giggle” method. This method is seldom used because it requires that you have two or three young ladies, basically in their tweens, sitting in the row in front of you. Alas, they are seldom available when attending a production of “Hedda Gabler” or “Mother Courage,” but I was fortunate to have said tweens sitting in front of me at a Friday night performance of Dickens immortal story, so I am glad to report that the show gets a “12-Bounce, 10-Gasp, 6-Giggle” rating. For those not familiar with this system, that translates to: it was an engaging, eye-filling, sumptuous production of a Christmas classic that will warm the hearts (right down to the cockles – whatever they are) of even the most jaded theatergoers.
This is the 20th year that the Stage has offered this particular Christmas present, and there are vestiges of earlier productions merged with some new twists (and turns), the newest being Michael Preston taking on the role of Ebenezer Scrooge (Buzz Roddy will also play the role at select performances). For those not familiar with the Stage’s take on the Dickens’ novella, there’s an emphasis, as the program’s sub-headline indicates, that this is “A Ghost Story of Christmas,” and ghosts there are aplenty, ghosts that dance and whirl and fly through the air, demons that rise from the fiery pits, ghosts that tease and tantalize, the most impressive being that of Scrooge’s deceased partner, Jacob Marley (Noble Shropshire), who is exceptionally spry given that he has been dead for seven years.
Since most people are familiar with the plot, attending a performance of “A Christmas Carol” offers little dramatic tension – you know what’s going to happen – you probably already know most of the dialogue. So, much of the entertainment is to be found in the show’s production values and how the lead actor handles the role of Scrooge.
Returning to the Bounce/Gasp/Giggle theory of critical evaluation, this show’s production values meet all expectations. The Bouncing quotient began to rise with the first appearance of the ghosts, choreographed by Hope Clarke, and lighting designer Robert Wierzel ably moved the Gasp needle up several notches, especially when hell opens up and Marley’s ghost appears (flying effects courtesy of ZFX, Inc.). The Giggle aspect was noted to first take effect when Mrs. Dilber (also Shropshire), Scrooge’s dyspeptic servant, makes her first appearance. As the evening progressed, the Bounce-Gasp-Giggle meters maintained their upward ascent, spiking with the appearance of the three Christmas spirits: Christmas Past (Rebecka Jones), Christmas Present (Alan Rust), and the bicycle-riding Christmas Future (no attribution provided).
As for Scrooge, you couldn’t ask for a more curmudgeonly, bah-humbuggedly miser than what Preston provides. At least the Grinch wanted to steal Christmas – Scrooge will have nothing to do with it and, of course, begrudges the fact that he must give his clerk, Bob Cratchit (Robert Hannon Davis), the day off. For 10 years a member of the ensemble known as the Flying Karamazov Brothers, Preston brings an agile, quirky presence to his creation of the fabled disdainer of festivity in any form. Because he emphasizes Scrooge’s cold-heartedness his character’s epiphany is all the more moving.
There’s a reason Hartford Stage has stayed with this production for 20 years, and it can be seen in the demographics of the audience, for it’s an opportunity for grandparents to introduce grandchildren to the theater (and for the grandchildren – especially the little girls -- to dress up), and for families to share a visually exciting experience. Spinning clocks, flying ghosts, flames and smoke and rattling chains – it all makes for a delightful evening of theater that registers high on the Bounce/Gasp/Giggle metric of critical evaluation.
“A Christmas Carol” runs through December 30. For tickets or more information call 860-527-5151 or go to www.hartfordstage.org.
Posted by Geary Danihy at 6:05 AM