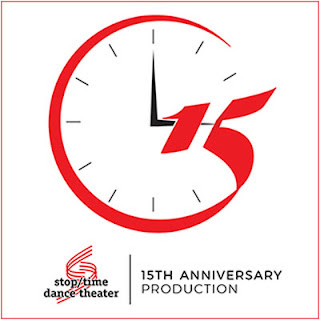 
So sings Gene Kelly in the “Broadway Rhythm Ballet” sequence in “Singin’ in the Rain.” The phrase could just as easily be the mantra of the members of Stop/Time Dance Theater, which is celebrating its 15th year up at Playhouse on Park with its production of, appropriately, “15.”


The show was conceived, directed and choreographed by Darlene Zoller, who is also co-founder and co-artistic director of the Playhouse. As with previous productions, the story-line is paper-thin, created, as Zoller explained after the opening-night performance, to just provide a reason for the cast to, well…dance, and dance they do, creating moments of exuberance  heightened by the proximity of the audience to what is occurring on the thrust stage. The intimacy demands that no one phones in a performance, and nobody does.


If it matters, the show focuses on a young woman, Victoria (Victoria Mooney) who, beset by the demands of social media, is, akin to Alice in her trip to Wonderland, swept up into a strange world ruled by Eon (Rick Fountain) and Millenia (Amanda Forker), a world that apparently controls the use, or abuse, of time. Victoria first appears searching for clues…to what is not exactly clear but, again, it really doesn’t matter, for the opening number, “Another Stop/Time Show,” brings the entire cast on stage for a robust dance number that sets the tone for the entire evening.

Many of the numbers borrow from other musicals – “West Side Story” (“Something’s Coming”), “Damn Yankees (“Two Lost Souls”), and “Wicked” (“Dancing Through Life”), to name just three, plus a witty re-working of “I Can’t Say No” from “Oklahoma (in this case, Victoria can’t say no to responding to text messages).  The use of these familiar songs provides a certain comfort level to the evening, anchoring the production within the well-established American musical theater gestalt.


However, it’s dance that drives the evening, and one might think that over the course of the almost two-hour show the hoofing might become a bit tedious. Such is not the case, for Zoller’s choreography, supported by evocative lighting by Aaron Hochheiser and a multitude of costumes by Lisa Steier, is inventive and diverse, incorporating tap, modern dance and ballet in a constant whirl that utilizes every inch of the stage (and a bit of the aisles as well).


What really shines forth is the unbridled enthusiasm the cast exhibits. They – many of whom have apparently been dancing before they learned to walk – may have day jobs, and quotidian concerns may sometimes conflict with rehearsals, but their commitment to the production is patently obvious. Seldom do you have the opportunity to see, close-up, passion personified, and these dancers are passionate about what they are doing. Electricity sparks throughout the evening, no more so than in the final number from “Hairspray,” “You Can’t Stop the Beat.”  It’s a fitting comment on the commitment these fine dancers have to an art form they obviously love.