The Fantasticks -- Ivoryton Playhouse -- Thru April 8 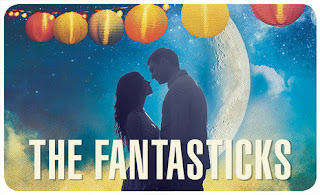 If musicals are the pastries of the American theater, then “The Fantasticks,” with book and lyrics by Tom Jones and music by Harvey Schmit, is up there on the shelf with the napoleons and cream puffs. This lighthearted quasi-fairy tale, which opened Off-Broadway in 1960 and ran for 42 years, tells a simple tale of boy meets girls, they fall in love, their love is apparently thwarted (not really), they part, but life intervenes to teach them both lessons that bring them back together. In its current iteration at the Ivoryton Playhouse, the pastry has been prepared with exquisite taste and style and should please diverse palates.


There’s been a slight (well, maybe not so slight) change in the casting. In the original production, the two lovers are kept apart (by plan) by their fathers. In the Ivoryton version, it’s the mothers, Hucklebee (Patricia Schuman) and Bellomy (Carly Callahan) who build a wall (Cory Candelet, playing The Mute) to ostensibly keep the young lovers apart, the point being that all you have to do to get a child to do something is to say “No” to them, a form of reverse psychology that all parents come to understand. Thus, the two young people, Matt (Ryan Bloomquist) and Luisa (the enchanting Kimberly Immanuel), pine, ache, moan and dream of their eventual union.


Said union is to be finally brought about by a faux abduction paid for by the mothers and crafted by El Gallo (David Pittsinger), a suave bandit, and two second-rate thespians who were, or are, literally born in a trunk: Mortimer (Will Clark), whose main claim to fame is his ability to die, and Henry (R. Bruce Connelly), who handles quotes from Shakespeare as if he is concocting trail mix. They will abduct the fair Luisa but allow Matt to save her…and thus the couple will live happily ever after.


Thus ends the first act, with a tableau that also opens the second act, the idea being that the actors have held their poses throughout the intermission. Of course, things quickly fall apart, for puppy love and fairy tales must inevitably rub up against harsh reality. Matt, sensing flaws in Luisa (“freckles!”), decides instead to experience the world, and Luisa, under El Gallo’s tutelage, just wants to be “bad.” They each go through their own dark nights of the soul and eventually realize what they really want is each other.


Most of the evening is totally engaging, thanks to the stellar cast that artistic director Jacqueline Hubbard has put together and the deft direction and choreography by Brian Feehan. The show I saw was early on in the run, but what was noticeable was how comfortable the actors seemed to be on the set created by Martin Scott Marchitto and how well Marcus Abbott’s lighting cues worked. Why surprising? Well, actors in theaters like Ivoryton often don’t get the opportunity to actually rehearse on the stage where they will be performing until shortly before the play opens. It takes a while to adjust, but apparently the adjustment was seamless.


As noted, the cast is excellent, but if standouts are necessary to mention, then I would point to Pittsinger, who has a phenomenal stage presence as El Gallo (and, given his operatic background, turns “Try to Remember” into a haunting hymn), and Immanuel, who glitters and glows and, in the first act, faints delightfully (and often). Kudos also to Clark for his extended death scene (I’m surprised the actors were able to suppress laughter) and Schuman and Callahan for the sprightly and engaging delivery of “Plant a Radish.”


It’s easy to see why “The Fantasticks” had such a long run. It’s a simple, touching story graced by some lovely songs, including the aforementioned “Try to Remember” and “Soon it’s Gonna Rain,” and in the case of the Ivoryton production, made memorable by a cast that is just about flawless. The Sunday matinee I attended was a packed house, and I would imagine that word-of-mouth will continue to fill the seats, for this production is a lovely way for Ivoryton to open its 2018 season.
“The Fantasticks” runs through April 8. For tickets or more information call 860-767-7318 or go to www.ivorytonplayhouse.org.
Posted by Geary Danihy at 4:05 AM