Love Quest -- Ivoryton Playhouse -- Thru May 13 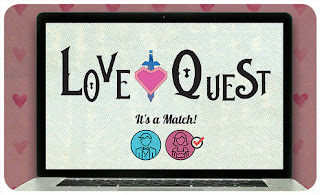 Are you into chick flicks? Well, if you are – and, truth be told, I am – then you should make your way out to the Ivoryton Playhouse to catch “Love Quest,” a play by Mary Maguire and Steven McGraw that has all the chick-flick elements and more than a dash of humor. Under the able direction of Jacqueline Hubbard, the Playhouse’s artistic director, the two-act play that details the quest of two ladies of disparate ages to find, if not true love, at least a date that doesn’t end in disaster, or extreme distaste, is an easy-going evening of theater that chronicles the ‘dating game’ as it is played on-line in the twenty-first century.


That this is chick-flick material is acknowledged from the first scene in which Kate (Linda Purl) and her daughter Megan (Susan Slotoroff) are in Kate’s kitchen considering the next step in Kate’s life after her husband had left her for a younger woman. Kate’s anxiety is currently being handled by consumption of Krispy Kreme donuts, but Megan wants her mother to “get back out there.” The answer is to register with an on-line dating service called Love Quest that, once you enter your profile, will algorithmically match you up with your perfect date (Not!).


At the same time, Brook (Jes Bedwinek), a high-end fashion designer, is looking for someone, a ‘hunk’ to be exact, to accompany her to an upcoming awards ceremony – think meat on her arm. Her assistant, Bove (Mike Mihmn), who sashays around the office providing her with coffee and fabric samples, questions her need to log onto Love Quest to find said ‘hunk,’ but Brook is determined. This set-up is a bit of a stretch. A top-of-the-line fashion designer should have her pick of ‘hunks’ to escort her to the ceremony but, if we stayed with logic then much of the play couldn’t go forward.


In any event, the two ladies set sail on their individual odysseys onto the uncertain (and perhaps treacherous) sea of dating with less than surprising results. In other words, there appears to be no safe harbor. Kate and Brook meet a series of males (played extremely well by Josh Powell) who, for one reason or another, make female flesh cringe and crawl. The evenings, presented in a series of quick scenes, are all disastrous, especially the very funny speed-dating scenes where both Purl and Bedwinek, in individual scenes, create the lotharios and losers they are confronted with during the timed interaction.


Maguire and McGraw have written a script that screams ‘screenplay,’ and it’s to Hubbard’s credit, with the assistance of scenic designer Daniel Nischan and lighting designer Marcus Abbott, that this remains a play rather than a rehearsal for a film shoot. However, though the evening runs close to two hour (there’s a 15-minute intermission), the play is structured such that I think the audience would have been willing to remain seated for the entire production. There’s a very nice build in the first act that gets interrupted by the intermission and hence the actors have to rev it all up again for the second act and it takes a while for the audience to get back into the swing of things.


There are some really engaging scenes that highlight the show. The first is when Megan brings Brooks to an establishment that caters to women who wish to have some redesign done to hair that does not grow on their heads. As a man, it was funny to watch – I can’t speak for the women in the audience, especially when, in silhouette, Kate has some hair removed. There were, however, some gasps and groans I heard from the audience.


The second scene is Kate imaging she is in a boxing ring, fighting against all of the losers she has met on her dates. She delivers recaps of their inept one-liners and come-ons and then knocks them out. It’s an especially pleasing moment, and one extremely well-acted by Purl.


It’s a chick-flick, remember, so there has to be true love lurking in the background. For Kate, it’s Hal (Joe Candelora), a man she has two dates with – both times he gets up abruptly and rushes out of the restaurants, much to Kate’s confusion. As for Brook, well it would be too much of a spoiler to reveal where her heart comes to rest, but there’s a line that this ‘true love’ delivers near the end of the play that deals with a mirror not wanting to give up Brook’s image that is sheer poetry. I can’t imagine a woman’s heart not melting a bit at hearing this line.


Yes, it’s all a bit contrived, but what chick flick isn’t? You know where all of it is going – the satisfaction is seeing how it gets there, and “Love Quest” satisfies on the levels it’s supposed to. It ain’t Chekhov or Ibsen, but it’s not meant to be. It’s a lighthearted, sometimes frolicsome look at the trials and tribulations of ‘being out there’ as a divorced woman or one who has never had a committed relationship. It may resonate more with women, but men in the audience might be wise to make mental notes, for there’s a lot of truth interspersed amongst the one-liners and sight gags (the best being a dress that falls off a mannequin) that might help to answer the question King Arthur posed in “Camelot” – “How to handle a woman?”