No Man He Never Liked

The Will Rogers Follies -- Goodspeed Musicals -- Thru June 21


What’s a good old country boy doing amidst a bevy of sequined, scantily clad beauties? Well, he’s shrugging a lot and occasionally smirking. The down-home wit is Will Rogers, and the ladies are hoofers for the Ziegfeld Follies, and how they eventually came together is the stuff of “The Will Rogers Follies,” a pastiche musical that opens Goodpeed Musicals’ new season. Held together by the amiable stage presence of David M. Lutken, who plays Rogers, it’s best described as “Woody Sez” meets “42nd Street.” Under Don Stephenson’s direction, you get a dose of country common sense and a dollop of big city glitz in an evening that entertains but seldom gets past the eyes to influence the heart.
There are some big names involved in the creation of what is billed as “A life in revue.” Peter Stone wrote the book, the legendary Cy Coleman provided the music and Betty Comden and Adolph Green penned the lyrics. The show opened on Broadway, with Keith Carradine in the lead, in 1991 and ran for over two years. It loosely covers Rogers’ life as a humorist and star of Broadway, the radio, film and as a newspaper columnist. The biographical moments, with Lutken simply relating memories, often while twirling a rope, are punctuated by big production numbers that capture the over-the-top Ziegfeld style, often with the voice of Ziegfeld (James Naughton) dictating what should and should not happen.
Obviously, the show is a hybrid, and as such the biographical moments sometimes mesh uneasily with the Follies production numbers, with the latter often seeming all but gratuitous. Yet there’s no denying that when Goodspeed wants to do a production number it doesn’t hold back, and they do capture the spirit of the Follies. 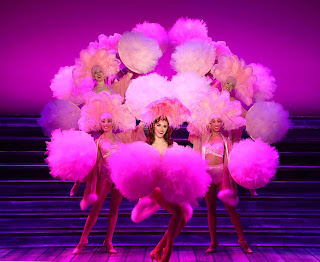 As mentioned, Lutken, who created the “Woody Sez” show and has travelled the world as its star, is the stabilizing force in all of this. He has a genuinely affable manner that allows him, as it did Rogers, to offer some acerbic comments on the passing scene while seeming not to be offensive. An especially engaging scene is when Lutken, as Rogers, first glances at and comments on the news as it appears in the latest edition of the NY Times, then gets papers from decades ago to again comment, the point being that some things never change and fools will always be fools.


There are several other standout performances, the first being that of David Garrison as Will’s father, Clem (he will also appear is several other roles, pointing out Ziegfeld’s parsimonious nature). As Will’s long-suffering wife, Betty, Catherine Walker gives perhaps the most emotionally moving performance, especially in her second-act number, “No Man Left for Me.” She’s also key to the humor involved in a number, dictated by Ziegfeld, that takes place on, believe it or not, the moon.
Seeking an analogy, one might call this an accordion musical, for it expands and contracts on a regular basis. We have the intimate moments with Rogers as he relates his life history, often interrupted by a somewhat irritating Wiley Post (Dewey Caddell), and then we have the big production numbers. There’s a valiant attempt to mesh the two but it doesn’t always work, especially in the “Presents for Mrs. Rogers” number. However, switching analogies, each can be enjoyed on its own merits, something like taking a bite out of a corn dog and then spooning up a bit of crème brulee.
“The Will Rogers Follies” runs through June 21. For tickets or more information call 860.873.8668 or visit: www.goodspeed.org.
Posted by Geary Danihy at 7:33 AM