Laughter at Whose Expense? 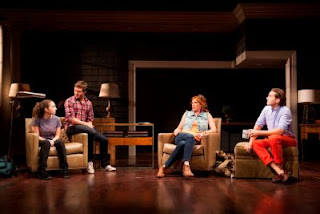 
It was the poet Samuel Taylor Coleridge who first suggested a reader must suspend disbelief if he or she is to become involved in a work of fiction. The concept was quickly applied to theatergoers: you have to disregard you are in a theater, that the set is not a construct, the people you are watching not actors but “real” people experiencing “real” situations.

It sounds as if the onus is on the playgoer, but the dramatist and the actors have a share in creating this illusion. Watching “Harbor,” a new play by Chad Beguelin that recently premiered at the Westport Country Playhouse under the direction of the Playhouse’s artistic director Mark Lamos, I couldn’t, try as I would, escape the fact that I was in a theater “watching” actors – very fine actors – playing roles. Perhaps the fault is mine, but “Harbor,” for all of its witty dialogue and apparent emotional weight, seems somehow hollow at the center, and that hollowness distanced me from what was happening on the stage.

The play’s premise is a conceit: how does the decision to have a child impact a relationship. Many couples have asked this question, but what if the established couple is gay, and the child in the offing carried by the estranged sister of one of the significant others?  And said sister is a sleep-around gal with a preternaturally mature teenage daughter in tow? And what if everyone is seeking sanctuary of some sort, i.e., “harbor,” and it all takes place in ? Neat? Yes, just a bit. 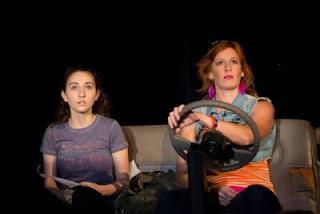 Alexis Molnar and Kate Nowlin. Photo by T. Charles Erickson.
Kevin (Bobby Steggert) and Ted (Paul Anthony Stewart) have it all: a beautiful house (nicely envisioned – interior in front of exterior – by scenic designer Andrew Jackness) and a long-standing relationship. Into this idyllic scenes crashes Kevin’s sister, Donna (Kate Nowlin), with her daughter, Lotte (Alexis Molnar), seeking to reconnect, and a whole lot more. Donna is brash, crass…and honest, or perhaps not, but her presence motivates Kevin and Ted to reevaluate their relationship and, in the process, weigh where “harbor” can be found. 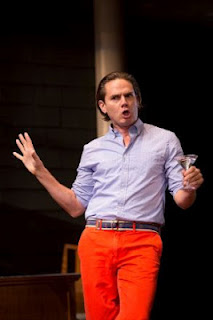 Paul Anthony Stewart. Photo by T. Charles Erickson
The dialogue, as noted, is witty – writerly witty – with a host of literary allusions (you might want to Google Edith Wharton’s “The House of Mirth” if you haven’t read it) and provides some great set-piece diatribes on modern children dictating family values, and purchases, and parental adoration of their entitled children, but it all seems “staged,” delivered for effect. It’s sit-com time, with one-liner laugh lines telegraphed. There’s also a lot of gay-bashing, delivered by sister Donna, that evoked quite a bit of laughter on opening night, but if you sit back for a second and ask what are you laughing at, you start to feel a bit uneasy. Whom, exactly, is the joke on?  Even in the context of a comedy, don’t these slurs still sting? 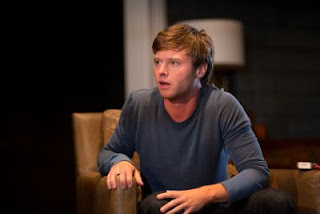 Bobby Steggert. Photo by T. Charles Erickson.
And yet, there are moments, many delivered by Molnar, a high school senior whose poise and timing is a marvel -- her delivery of her “proctologist” line is priceless. And Knowlin shines in the second act as she confronts her brother, and Steggert and Stewart give us a heart-wrenching “parking lot” scene. Yet, half-way though the second act it suddenly stuck me: this should be a novel, allowing the reader to suspend his or her disbelief as scenes are created in the mind rather than on the stage. As good as these four actors are, their characters seem to be less than the dialogue suggests. A strange situation, but not uncommon. How many times have you read a novel, been totally enraptured, then seen the screen (or theatrical) version and come away less than satisfied?

“Harbor” gives you a lot to think about, and a lot to laugh about, but there’s something missing, some essential spark that draws you in and makes you forget you are sitting in a theater watching a play. Perhaps if the creative team had approached this play not as a comedy but as a tragedy, the dialogue would have evoked not only laughter but tears. After all, the line between comedy and tragedy is very thin.

“Harbor” runs through Sept. 15. For tickets or more information call 203-227-4177 or go to www.westportcountryplayhouse.org.
Posted by Geary Danihy at 7:41 AM