Angst in the Old West 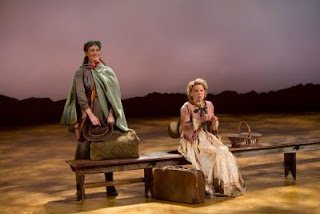 Talk about schizophrenic. Hartford Stage’s last offering was the engaging “Man in a Case,” a somewhat enigmatic, surreal re-working of two of Anton Chekhov’s short stories, light on plot and heavy on atmosphere and multi-media. Now, we have Beth Henley’s “Abundance,” (deftly directed by Jenn Thompson), an equally engaging yet old-fashioned tale of two women who go west as mail order brides and experience heartache, trauma, triumph and defeat, all told in a linear fashion, albeit surrounded by the briefest of presentational yet creative sets created by Wilson Chin. You just never know.

It’s the 1860s in the when two young women, Bess (Monique Vukovic) and Macon (Brenda Withers), meet at a train station. Bess is shy and eager to meet her potential husband; is bold, brash, demonstrative and ready to engage life on whatever level it presents itself. She proclaims that she and Bess are alike, although they are polar opposites. This initial opposition will become a major plot point.

Soon, Jack (James Knight), a violent, misanthropic man, appears to claim Bess…for his dead brother, the man who had actually corresponded with her. On his heels comes William (Kevin Kelly), sporting an eye patch (he lost an eye in a mining accident) to gather in the free-spirited . Obviously, whatever pipe dreams these two women maintained as they wended their way West are about to be crushed. The women go off with their respective husbands-to-be to begin hardscrabble lives on the prairie.

Initially, Macon and William thrive, while Jack and Bess struggle, so much so that they are eventually taken in by Macon and William. Neither marriage is happy, each dysfunctional in its own way, but the two women fight to maintain a bond as they struggle to create lives for themselves in a harsh environment. 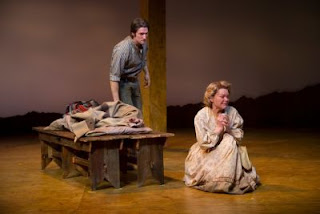 ends the first act with multiple shocks that play themselves out in the second act as tables are turned, tragedy turns into triumph, triumph into tragedy, and characters are forever changed. Engaging? Absolutely. There are flaws, but they really don’t take away from the power of the story tells, and it is a story, an old-fashioned, “Lonesome Dove” kind of story that keeps you comfortably in your seat for the two-plus hours it takes to unfold.
Central to all of this “working” is the work of the two actors who portray the young brides who will face the rigors of a quasi-tamed West. Both Vukovic and Withers turn in fine performances as they establish their characters and then, over time, essentially trade places. However, they can only work with what Henley has given them, and it is obvious that although the playwright has written Bess with perception and feeling, she has written from the heart. You just sense whom the playwright’s favorite “child” is, for while Vukovic’s character enters meek and mild (as she must), Withers’ character enters like a force of nature, eager to sit at a table and devour the feast she believes life is about to offer her.
And thus, it is Withers’ character who dominates, and Withers’ presence on stage (she is tall, angular, and beautiful in a way that seems unique to her) cannot help but draw the eye. In one scene, she stands silently, arms folded across her chest, as other actors deliver their lines, but you inexorably seek her out, watch her, weigh what is happening by her reactions.
The more diminutive Vukovic also has her moments, especially in the second act when she is, at first, chained and almost inarticulate, then transforms from victim to victor with the help of Elmore (John Leonard Thompson), an academic eager to capture her experiences among the “savages.” Henley adheres to the Aristotelian demand for unity by having the two women (although radically changed) meet in the denouement as they did in the play’s opening scene, thus emphasizing the arcs of both women’s lives.
Knight and Kelly have more difficult tasks, for as subtly as sculpts her female characters, her males tend to teeter on the edge of stereotypes. The ocularly-challenged William is man-as-wimp, and Jack is written as man-as-beast, a bargain-basement Stanley Kowalski. Hence, although Kelly and Knight do what they can to bring life to their characters, they must speak the dialogue has written for them and perform the deeds she demands. Kelly gets the better of it, for while he is given some subtly Knight is asked to be an out-and-out blaggard with no redeeming qualities, a tough role that Knight does his best with. 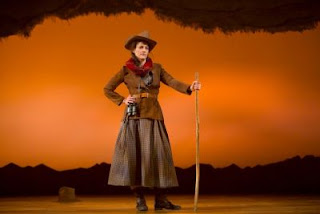 Brenda Withers as Macon. Photo by T. Charles Erickson
There’s no doubt that this is, primarily, ’s story, and Withers delivers, giving a performance worth the price of admission. There are moments when pace drags a bit, but whenever Withers’ is on stage the play shimmers, shines and pulsates.
“Abundance” runs through April 28. For tickets or more information call 860-527-5151 or go to www.hartfordstage.org.
Posted by Geary Danihy at 7:42 PM