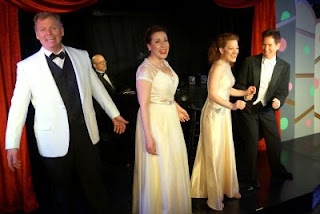 The intimate confines of MTC MainStage in Westport is currently presenting “Cole: An Entertainment Based on the Works and Music of Cole Porter,” a rather lumbering title for a light, frothy revue featuring some of Cole Porter’s best songs (and some seldom heard), presented by a talented cast of four who seem to be really enjoying what they are doing.

The structure of “Cole” is formulaic, for most shows showcasing the work of single composers or artists offer songs interspersed with bits of biography – it can become a tad monotonous if the cast really isn’t into it. Such is not the case here. As directed by Kevin Connors, MTC’s executive artistic director, the evening, which lasts a bit more than an hour, moves along nicely, with the cast, which includes Blair Alexis Brown (the show's Ethel Merman), Kathy Calahan, Phillip Chaffin and Eric Scott Kincaid (last seen at MTC in “Cabaret’” in a riveting performance as the Emcee), interacting in a believable manner (such interaction often seems forced in productions like this).

The songs are presented chronologically, starting with Porter’s first efforts at writing a fight song for the Yale football team – “Bingo, That’s the Lingo” -- and then, after he gave up studying law at Harvard, his first Broadway effort, a dismal flop called “See America First.” Chagrined by the negative critical response, Porter fled to , where he indulged in a somewhat sybaritic lifestyle. He returned to Broadway in 1928 with his first hit show, “.” His star rose, then fell, then soared with “Kiss Me Kate,” which won the Tony Award in 1949 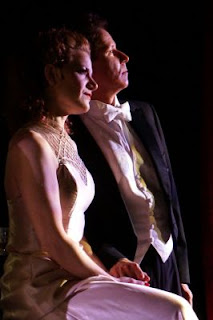 “Cole” offers snippets of biographical information, with a somewhat coy handling of Porter’s sexuality, while allowing the cast to highlight many of the composer’s enduring and endearing songs: “Love for Sale,” “I Love Paris,” “Anything Goes,” “So in Love,” “Another Op’nin’” and, of course, “It's De-Lovely.” There’s just the right mix of the well-known and the somewhat arcane songs penned by one of ’s most sophisticated song writers, a man who contributed many memorable songs to what has become known as the American Songbook.

For those who like witty lyrics and a sprightly tune, “Cole” is an easy night out, easy on the ears and the eyes, and it is also a reminder of a time in America when what happened on Broadway – the songs that were sung on its stages – were the songs that would fill the airwaves and be sung in parlors across the nation. It was a vibrant time for American musical theater, and Cole Porter was at the heart of it.