The Man and the Myth

"The Mountaintop" -- Hartford TheaterWords -- Thru May 5 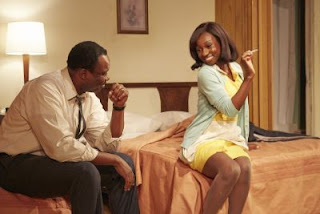 It looks like it’s American History Month at theaters. First, “Ride the Tiger” opened at Long Wharf, a docu-drama of sorts dealing with JFK’s run for the presidency (and the tragic flaw that would bring about his fall), and now we have “The Mountaintop” at Hartford’s TheaterWorks, the stylized story of Martin Luther King, Jr.’s last day on earth. While “Tiger” attempts at least a skein of verisimilitude, “Mountaintop” introduces supernatural forces to reveal the inner workings of one of the central figures in ’s struggle with racism. For a while it works, and works well, but unfortunately the play devolves into mere panegyric, undercutting its efforts to present a portrait of an all too human man who rose above his fears and faults to move a nation.

Written by Katori Hall and directed by TheaterWorks producing artistic director Rob Ruggiero, “The Mountaintop” takes place in Room 306 of The Lorraine Motel in on April 3, 1968, the night before King will be assassinated. Fresh from delivering his “I Have Been to the Mountaintop” speech at the Mason Temple, a weary, ill and somewhat dejected King (Jamil A. C. Mangan) returns to his motel room during a thunderstorm. He calls for room service, is told that it is no longer available, but succeeds in ordering a cup of coffee. Soon, with the rain continuing to pour down, there’s a knock at the door and Camae (Courtney Thomas), a maid working her first night on the job, enters, a newspaper shielding her head from the elements, to deliver the coffee. Lonely and in need of a cigarette, King convinces Camae to linger, and off we go.

What follows is a gradual revelation of the man behind the legend. As the feisty Camae teases, cajoles, shocks and challenges Rev. King, the man’s fears, frustrations, faults and dreams come into focus. Mangan deftly creates a portrait of a man who has had greatness thrust upon him, who had started out merely wishing to be a minister – that would have been enough – only to be drawn into a titanic struggle for the soul of a nation. Avoiding histrionics, he conveys King’s passion for justice for his race, his shunning of violence and his fear that all of his efforts will be for naught.
Acting as a sort of analytical psychologist, Thomas’s Camae is a whirlwind of energy, quickly shifting from consoling Muse to confrontational devil’s advocate, drawing King out, commiserating when necessary and challenging when called for. As Mangan must allow his character to evolve over the course of the evening, so too must Thomas, for there’s more to Camae than first meets the eye. Slowly, King starts to realize that this chamber maid seems to know quite a bit more about his life than would be expected. How, for instance, does she know that his real first name is Michael?

The dramatic device Hall relies on to shift gears has been used in various forms and fashions by everyone from Dickens in “A Christmas Carol” to David Ives in “Venus in Fur.” Suffice it to say that Camae brings more to the motel room than a cup of coffee. Her transformation forces King to confront his own mortality and provides some of the most moving scenes in the play, right up until its final moments when Camae begins to deliver an encomium that all but sanctifies King, a eulogy reinforced by some visual time-traveling that is meant to inspire but seems a bit overwrought. The man is once again subsumed by the legend, the very thing that Hall was apparently attempting to reverse. In essence, the play’s final moments betray its original intent.

Much is made in the program about the representational set created by Evan Adamson, who visited the Lorraine Motel, which is now The National Civil Rights Museum, and was allowed access to Room 306. While there, “every square inch of the room was catalogued, nothing was left undocumented.” Thus, the set is, as much as possible, a replica, but one wonders if this was the right way to go, for there is a certain feeling of stasis that surrounds the actors, initially not off-putting but more so as their characters begin to transform. Perhaps a presentational approach would have lent greater credence to the surreal aspects of the play.

Set aside, “The Mountaintop” offers many humorous and gripping moments of theater. That the denouement does not deliver does not take away from the play’s power. The opening night audience gave a well-deserved standing-O to the two actors, who were visibly moved, perhaps by the applause but more likely by what they had accomplished in bringing back to life a man who, like , now belongs to the ages.