A "South Pacific" Without an Edge 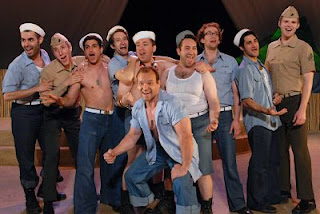 
Over the past few years, the Summer Theatre of New Canaan has successfully transported its audiences to venues as varied as Camelot, Victorian England and biblical , and this year, for its opening production, it takes its audience to the South Pacific during World War II, but somehow, for some reason, the trip seems to lack something. That’s not to say that STONC’s production of Rodgers and Hammerstein’s “South Pacific,” a musical based on James Michener’s “Tales of the South Pacific,” is not engaging or entertaining. It is. However, there seems to be something missing, some ineffable quality, some spark that turns an evening of musical theater into something magical, more than the sum of its parts.

As directed by Allegra Libonati and choreographed by Doug Shankman, individual numbers in the show shine, as well they should, for the cast is, by and large, stellar, yet these moments stand out as “the best of South Pacific” efforts, not part of an on-going story into which the musical number have been woven. The reason for this disconnect is hard to put your finger on, but it’s there. Perhaps it’s inherent in the musical itself. Perhaps not. It seems a matter of chemistry. It often feels as if the individual cast members have rehearsed separately…they are very good on their own, but together their efforts simply don’t mesh. 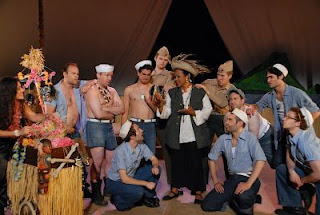 Janelle Robinson as Bloody Mary tries to sell her wares.

So, let’s deal with the characters, on their own. The standout among many excellent performances is Janelle Robinson’s Bloody Mary. She is dead-on, giving us a native wheeler-dealer interested in marrying off her daughter Liat (a lithe and lovely Kim Wong) to the best man on the market. And her individual numbers? “Bali Ha’i” is exquisite, as is “Happy Talk.” Her body language, her accent, and her arch, sharp, often biting characterization of a woman making the best of whatever opportunities are available all go to create a complete, believable character. 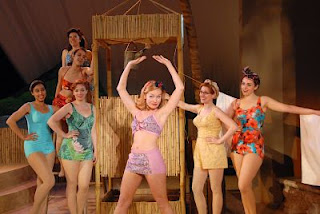 Tiffan Borelli wants to "Wash That Man Right Out of My Hair."

The same can be said of the delightful Tiffan Borelli, who gives us a multi-level Ensign Nellie Forbush, a young lady who, early on in the show, becomes romantically involved with a French planter, Emile De Becque (Daniel Klein), thus creating one of two liaisons that deal with mixed-race relations and prejudice that are at the heart of the show.

Again, Borelli, like Robinson, gives us some wonderful moments, often backed by a talented ensemble of nurses and sailors. Staging of “Cockeyed Optimist,” “I’m Gonna Wash That Man Right out of My Hair,” Wonderful Guy” and “Honey Bun” allows her to deliver the goods, as does Klein’s take on “Some Enchanted Evening” and “This Nearly was Mine.” The problem is, it feels as if they are in love with other people, not each other, which adds to the disconnect. 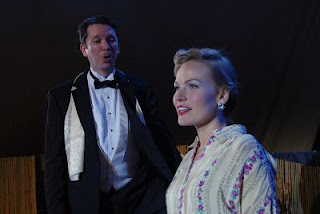 There are other stand-out moments, especially the male ensemble’s delivery of “There is Nothing Like a Dame,” featuring Luther Billis, a Sgt. Bilko type (before there was a Sgt. Bilko) nicely played by Nick Reynolds, and Jason Michael Evans’ “Younger Than Springtime” and “You’ve Got to the Carefully Taught,” the numbers dealing with the young Marine pilot’s love for and eventual rejection of Liat, a rejection based on racial prejudice.

So, if all of these numbers are so admirably staged, then why does one come away feeling less than fulfilled? Well, the musical is set in the wartime South Pacific, and the non-musical scenes dealing with tactics, strategy and the daily grind and desperation of war simply fall flat. When the cast stops singing and starts dealing with the war, well, it feels as if you’re watching re-runs of “McHale’s Navy.” There’s simply not much at stake, so the denouement, which should strike hard at the emotions, evokes nothing more than a shrug as a noted plot point is delivered.

Perhaps that goes to the heart of what really stopped at least one person from totally embracing this production. There is a sharpness, an edge, a special tang to relationships that might, at any moment, be cruelly, violently ended as lovers are torn apart by the surge of cataclysmic events beyond their control. As good as the music, singing and dancing is, without this undercurrent of pending tragedy, this “South Pacific” is, well, a delightful revue, pleasant but not riveting.