Two Hours With a Bore 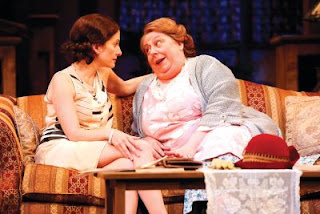 Mia Barron and Jayne Houdyshell in “The Show-Off." Photo by Carol Rosegg

Apparently, insufferable bores are the same no matter when or where you come across them, be it in the Roman Senate, the court of Louis XIV, in the ante-bellum US Senate, or in a house in circa 1924. They preen, they boast, the find themselves fascinating and, regrettably, they never shut up. Such is one Aubrey Piper, a clerk for the Pennsylvania Railroad who descends upon the Fisher family via an enamored daughter and, like a barnacle or a bad penny, just can’t be gotten rid of. This is the thrust of George Kelly’s dramedy, “The Show-Off,” which recently opened at the Westport Country Playhouse under the direction of Nicholas Martin.
The basic problem with writing…and staging...a play whose main character is someone you would only invite once to your house is that, well, you are a captive audience, and if Aubrey’s type is a bit off-putting to you, well, there’s a little bit of squirming in the seat over the almost two-and-a-half hours it takes for the play to leisurely works its way to a foregone conclusion.
That Aubrey is, in fact, so irritating actually does Will Rogers (yes, that’s his name) great credit, for it takes a great deal of talent to create such a quirky, jerky, off-putting character, and Rogers does it exquisitely, his body language and voice modulation such that from the moment he comes on stage (actually, even before you see him) you immediately dislike him. Here, you say to yourself, is a man you would definitely not go bowling with. However, the role is something of a one-trick pony, and were it not for Mrs. Fisher, the mater familias, played by the veteran actress Jayne Houdyshell, the evening might seem interminable, for Houdyshell’s interpretation of the much-put-upon mother is a gem. A wise actress, she knows how to get the most out of a look, a subtle gesture, a shrug, a grimace. Those interested in learning the trade would do well to get a ticket just to study her performance.
There is also good work done by Mia Barron, who plays Mrs. Fisher’s married daughter, Clara, and Clea Alsip, who plays the aforementioned Piper-smittened daughter Amy. has the harder task of the two ladies, since she must get the audience to believe that she would actually fall in love with someone with such limited appeal as Piper. 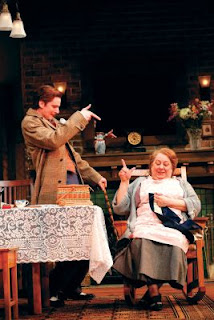 Will Rogers and Jayne Houdyshell in George Kelly’s “The Show-Off.”                 Photo by Carol Rosegg
The play’s length works against itself, and this falls on the shoulders of Kelly, who felt it necessary to deliver background and plot points once, twice, thrice, and give us characters such as a workingman named Mr. Gill (Nat DeWolf) whose function, other than as a delivery man of sorts, is never made clear, though he’s given quite a bit of dialogue (much of it repetitious). There are also certain pieces of stage business that are never truly explained, chief among them involving Clara’s husband, Frank (Robert Eli), who has a tendency to drift off, staring into space. It’s done often enough to draw attention to itself but its relevance remains to be seen.
There’s also a bit of a disconnect late in the second act when Mrs. Fisher should be focused on the heart wrenching news that has just arrived but, with the appearance of Piper, focuses on something a wife of many years would, in a moment of crisis, pay little attention to, especially since it deals with Piper, whom she disdains.
All in all, “The Show-Off” takes a long time to travel a very short distance. It’s pleasant enough, but it was written long before sitcoms came on the scene and trained audiences to expect rapid-fire one-liners and plot resolution in 30 minutes. Thus, many in the audience may experience a bit of attention-deficit as they try to adjust to comedy written for an era that moved just a bit slower than the one we are living in now.
“The Show-Off” runs through June 29. For tickets or more information call 203-227-4177 or go to www.westportplayhouse.org.
Posted by Geary Danihy at 6:57 PM