A Dark and Discomfiting "Cabaret" 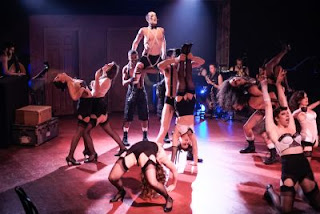 Brendan Norton and the cast of "Cabaret." Photo by Rich Wagner


For those familiar only with the slick, bowdlerized 1972 movie version of “Cabaret,” you should consider making the trip up to to take in Playhouse on Park’s current production of the John Kander/Frank Ebb musical. It will open your eyes.
Last year, MTC Mainstage proved that a venue with a limited stage could produce a gripping, engaging production of “Cabaret,” and Playhouse on Park has confirmed this with its gritty, sensual and very intimate take on the story of Sally Bowles (Erin Lindsey Krom), the toast of Mayfair working at the Kit Kat Klub in Weimar-era Berlin, where the Emcee (Brendan Norton) holds sway over a bevy of dancers and singers, both male and female, who can no longer spell the word “virginity.” Into this demimonde wanders Cliff (Jake Loewenthal), a somewhat naïve American writer manqué who soon becomes entranced by and entrenched in Sally’s world, a hedonistic environment that is beginning to darken as the shadows of Nazism swirl and take form.
This is an up-front, in-your-face production that seeks to immerse you in Sally’s tainted world from the moment you walk into the foyer, which is dimly lit and, with the clutch of theatergoers mingling, somewhat (intentionally) claustrophobic. If your eyes wander a bit, you will see lightly clad actors and actresses engaging in various activities not normally seen in a theater foyer. The overt sensuality continues once you enter the main theater, for there you will find other cast members mingling with the audience, presenting wiggling posteriors and intriguing décolletages. If you are easily embarrassed you might devote your total attention to the ads in the program until the lights dim, but even then you cannot escape, for director Sean Harris and choreographer Darlene Zoller won’t allow it. Like it or not, you’re there at the Kit Kat Klub, so you best just sit back and enjoy the depravity. Obviously, this is not a show for the young folks.
At times, Zoller has the actors and actresses lay on (pun intended) the sexual gestures just a bit too heavily – perhaps here less would have been more – but the message is, if nothing else, clear. And what is the message? Well, as with all things taken to excess, there comes a point when what was intriguing and stimulating becomes mechanical and soul-shriving; the eyes go dead.
Set against the decadence of the Kit Kat Klub is the boarding house run by Fraulein Schneider (Kathleen Huber), where Cliff finds residence among the other roomers, including Fraulein Kost (Ashley Ford), who patriotically services as many sailors as she can, and Herr Schultz (Damian Buzzerio), a greengrocer who also happens to be a Jew.
What this production highlights is the moral morass normal people are confronted with when faced with institutionalized evil, and how fear can affect human relationships. Decisions are made by the central characters. Cliff, initially co-opted by Ernst (Conor Hamill) to work unknowingly for the Nazis for money, pays a physical and emotional price when he rejects the totalitarian philosophy. Herr Schultz opts for denial, and pays the ultimate price. Fraulein Schneider confronts the reality of those who are frail and powerless and eventually allows evil to triumph out of fear. Sally chooses illusion over reality, and the amoral Emcee is eventually caught up in and destroyed by that which he taunted and jeered at. In essence, the message is simple: if you do not act to defend humanity against its baser urges you will be consumed by them.
In this depraved, dangerous environment there are moments of light. The tentative romance between Fraulein Schneider and Herr Schultz gives us “Married,” an achingly beautiful duet that captures the hope that springs eternal, and when Sally tells Cliff that she is pregnant and, instead of rejecting her, he embraces her, “Maybe This Time” gives us a woman who senses that things just might be different…this time. Yet these flickering flames are eventually doused by the darker moments that capture venality (“Money”), prejudice (“If You Could See Her” – they adhere to the original lyrics, which deliver a stinger at the end of the song), decadence (“Two Ladies”), despair (“What Would You Do?”) and nationalism used as a tool to inflame (“Tomorrow Belongs to Me”).
Setting the tone for this dark tale, enhanced by Marcus Abbotts eerie, evocative lighting, is Norton’s Emcee, who looks like he could have wandered off the set of “The Rocky Horror Picture Show.” Tall, lean almost to the point of emaciation, and sporting somewhat ghoulish make-up, he prances and cavorts, gloats and leers, and fondles anything that moves on two legs. He oversees both the doings at the Klub and many of the emotional moments among Frau Schneider’s borders, a dark, lurking presence that puts the lie to any hopes these people might have of salvation. 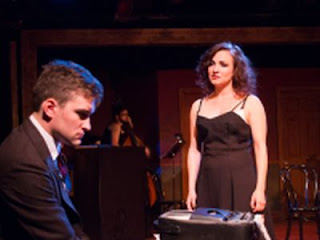 Krom’s Sally is perky enough, although it is only with her final number, “Cabaret,” that we truly get to see the fear and uncertainty that lurks beneath the bright, brash surface. Playing off her, Lowenthal’s Cliff is solid and earnest, with just the right touch of American naïveté. As the doomed, elderly lovers Huber and Buzzerio create some of the most touching moments in the show – you believe they really are who they are portraying and hence feel all the more for them at the end.
If you decide to come to the cabaret – and you should – be prepared to be entertained, but also be prepared to be challenged and just a bit discomfited. “Mary Poppins” it ain’t.