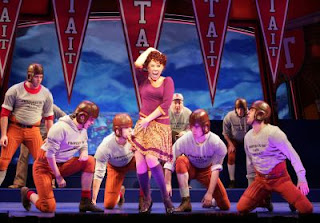 Tessa Faye as Babe tells the football team "I Want To Be Bad."
Photo by Diane Sobolewski


Some people like to go deep-sea diving and others are content to splash around in a wading pool. Both groups have fun, but it’s a different order of fun. If you are of the wading pool group, then “Good News,” currently playing at Goodspeed Opera House, is just your ticket. The water’s not too deep and all that’s demanded of you is that you simply sit back and occasionally wiggle your toes.

The musical, which has been adapted by Jeremy Desmon from a book by Laurence Schwab, B. G. DeSylva and Frank Mandel, debuted on Broadway in 1927, the same year that Jerome Kern’s “Showboat” opened. The two shows couldn’t have been more different, for whereas “Showboat” dealt with topics that bedeviled America (prejudice, racism), “Good News” focused on the of lot of college students caught up in the blithe inanity of the Roaring Twenties, a sub-culture that embraced booze, sex, suggestive dancing…and football…as the primary goals of life. “Showboat” became iconic; “Good News”…well, there was a 1947 film starring Peter Lawford and June Allyson. It was cute. 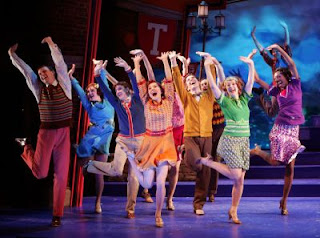 The cast of "Good News." Photo by Diane Sobolewski

And “cute” is the operative word for Goodspeed’s production of this light-as-a-feather musical under the direction of Vince Pesce, who is also responsible for the energetic choreography. The story line is about as basic as it can get: Tom Marlowe (Ross Lekites), a football star at Taft College, is dating perky, blond Pat Bingham (Lindsay O’Neil), a co-ed focused not only on the BIG game but the dance to follow, an event that, she is sure, will provide the venue for Tom’s proposal. Alas, Tom has been a bit laggard in his studies and has failed astronomy, a class taught by Professor Kenyon (Beth Glover). Shockingly, he’s ineligible to play football (where are this college’s priorities?). Coach Bill Johnson (Mark Zimmnerman), informed of the problem by his assistant, Pooch (Max Perlman), asks the good professor (who was an old college flame) to give Tom another chance. She agrees to let Tom take a make-up exam and Coach solicits the help of the professor’s star pupil, the studious Connie (Chelsea Morgan Stock) to tutor astronomy-challenged Tom. You can guess what follows.

There’s also a sub-plot of sorts, and it captures the essence of what’s right (and possibly wrong) about this production…or the musical itself, written for an era that is almost a century in the past. Sexually liberated (or just perpetually in heat) Babe O’Day (Tessa Faye) has broken up with the intellectually-challenged Beef Saunders (Myles J. McHale) and is now on the prowl for a new man. She sets her sights on Bobby Randall (Barry Shafrin) with a vengeance. Essentially, she stalks him, flaunting and flirting, much to the confusion of Bobby, who fears Beef’s wrath will descend at any moment.

Yes, it’s all light-hearted fun, but it is so alien to America circa 2013 that its aged attempts at being risqué seem, if nothing else, slightly off-putting. However, Goodspeed is renowned for boarding shows that, if nothing else, are energy personified, and “Good News” certainly is that, with a cast that burns calories by the minute, but there’s a vacuum lurking beneath the surface shimmer of this show, an emotional emptiness that can’t be hidden by the patina of perkiness evinced by the entire cast. In essence, “Good News” is just too cute for words.

Under Pesce’s direction, most of this talented cast seems bent on asking the audience, “Do you see what I’m doing right now? Do you get the joke? Do you understand I’m happy…mad...sad?” Gestures are broad, reactions are exaggerated, and emotions are parsed down to the lowest common denominator. Yes, the book is simple, but that doesn’t mean it has to be played as if all the characters are simple.

So, if you’re a wading-pool sort of person, “Good News” should certainly satisfy your toe-wiggling needs. The song-and-dance numbers will make you smile and, of course, there’s a happy ending. However, if you ask something more of a musical than toe-wiggling, you might want to search out where “Next to ” is currently playing in .