Ghosts in the Room

"The Dining Room" -- Westport Country Playhouse -- Thru May 18 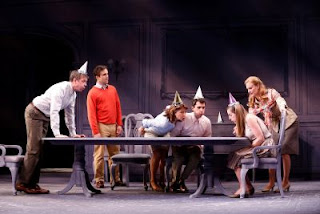 Sometimes it just all comes together, and when it does there’s magic on the stage. Such is the case with “The Dining Room,” A. R. Gurney’s nostalgic look back at a way of life, a way of thinking, a way of dining, currently on the boards at the Westport Country Playhouse. The production, under the sure directorial hand of Mark Lamos, the Playhouse’s artistic director, satisfies on many levels, and although it may initially generate a bit of confusion amongst the audience members as to who is who, the smart theatergoer should simply sit back, not worry about such trivialities, and just soak it all in.
The amazing thing is that “The Dining Room,” first produced in 1982, succeeds without having a plot, or at least one that follows the schema of rising action/climax/falling action of traditional dramas. Instead, what Gurney gives us is a series of vignettes as various families interact in a single room, a formal dining room that is done up in a ghost-like, pale blue motif created by scenic designer Michael Yeargan. The set is apropos, for Gurney’s thrust is that what we are seeing has passed from view and become wisps of memory. It is only in the final moments of the play that the setting itself comes to vivid life and we are given a tableau vivant that is touching and heartfelt.
Some may quibble that what we are watching is the slow demise of dinosaurs (aka WASPs), and good riddance, and yes, Gurney captures much of the pretentiousness and “soft” bigotry inherent in the tribe, but the playwright is not interested in pillorying; this is not a strident attack but rather a gentle nudging, for whatever their faults, the WASPs Gurney chronicles lived by a code and, in their own way, we’re as concerned about their own as were any of the untermenschen they frowned upon (and hired as servants).
In a commentary by Gurney written for the Playhouse’s program he acknowledges that the lack of clear, linear presentation may present problems for the audience, for it is often difficult to determine exactly which family we are viewing and at which stage in the family’s life the scene is taking place, but, although this is initially troubling, the bother passes, and much of the credit for this must go to the stellar ensemble of actors Lamos has gathered, in number six – Heidi Armbruster, Chris Henley Coffey, Keira Naughton, Jake Robards, Charles Socarides and Jennifer Van Dyck – who, over the course of the evening, take on over 50 roles.
To accept and embrace what is going on you have to understand that added to the 50-plus characters there is one other, which is the room itself, and if the audience members take the position that they are, in fact, the room, then the comings and goings, the different familial and related designations – Mother? Daughter? Husband? Grandfather? Maid? Cook? – simply don’t matter. The people change, the room is eternal, accepts all that happens and does not judge; it simply provides the venue for life to unfold, to act out its little moments, be they birthday parties, assignations, fraught father-daughter conversations or torturous meals where the proprieties must be observed and finger bowls must be used.
A lot is asked of these six actors, and all deliver, though (given the nature of the script) it is the three women who seem to shine the most. It’s a delight to watch Van Dyck change from gawky adolescent to sophisticated, sexy matron to terse, arthritic servant, Armbruster to morph from frigid, rule-bound matron to saucy teen to Irish factotum, and, most delightful, to watch Naughton shift from obstreperous teen to troubled wife, to a grandmother suffering from Alzheimer’s, to a perplexed cook…and many of these transmogrifications are done in mere moments.
In the end, I come back to the play’s final moments, which Lamos has crafted with a deft hand, for what we are given is a scene of civility and congeniality, lit by candlelight -- people gathering together to share what, in fact, tribes have always shared, which is feasting by firelight, be it in caves, castles or dining rooms, creating an environment that, at least for the moment, tells us we are among friends and whatever demons may lurk in the shadows are being kept at bay by the warmth and light that shines around us, a warmth and light we ourselves create…because we are family, we are the tribe known as… (fill in the blank).
“The Dining Room” runs through May 18. For tickets or more information 203-227-4177 or go to www.westportplayhouse.org.