Love is a Many Splintered Thing 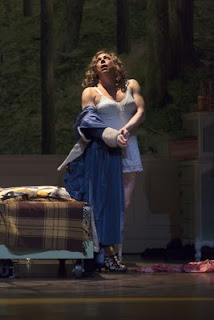 Bill Camp in ‘In A Year with 13 Moons’.
Photo by Richard Termine

There are those who say that the Yale Repertory Theatre often dabbles in post-modernistic-theater-of-the-absurd-nihilistic-surrealism, that those in charge of the venerable establishment conceive of their audience as a blend of the Marquis de Sade and Krafft-Ebing, that what is sometimes offered fulfills only the needs of those who dwell in dark attics reading Henry Miller as they sit naked, sucking on lemons, and fantasizing about Lolita, but to these people I say nay! And I offer up as rebuttal to such calumny the Rep’s current production of “In a Year With 13 Moons,” an adaptation by Bill Camp (who also headlines) and Robert Woodruff of the 1978 film written and directed by Rainer Werner Fassbinder. I mean, ‘13 Moons’ is the essence of cliché: boy wants to become girl; boy becomes girl; boy rues becoming girl and suffers the consequences. Can there be anything more mainline, , Mom and apple pie than that?

Look, you’ve got this simple guy who works in a slaughterhouse who just wants to be loved and, as we all know, love makes the world go ‘round, so he runs into another guy named Anton Saitz (Christopher Innvar) whom he falls in love with, and Anton (his last name is spelled with an A and an I – don’t forget that – it’s important! Why? Well oranges are important, aren’t they? What? What do oranges have to do with…? To that I say, sauerkraut!), and Anton says, well, it would be better if you were a girl, so the cow-killer rushes off to Casablanca and has a sex-change operation and emerges as Elvira, all because he loves Anton, who will eventually emerge as a man with a Jerry Lewis fetish (don’t ask).

The play has many hi-tech, multi-screen diversions and a two-piece pit orchestra that, I do believe, includes a cat being electrocuted, all of which are appreciably provided by director Robert Woodruff just in case you don’t want to watch what is actually going on up there, (two ladies to my right didn’t – they fell asleep – Philistines!).

As the play opens, Elvira has a slight problem – after being beaten up by some low-lifes she has tried to find comfort with, her lover of long standing, Christoph, (Babs Olyusanmokun) thinks she is fat and brainless, and so also beats her up a bit…think of it as a lover’s quarrel. He packs. She begs him to stay. He opts out. What’s a girl to do? Well, there’s always your prostitute friend, Red Zora (Monica Santana) to turn to, a young lady who knows how to display the merchandise and just happens to have a video camera that allows her to capture Elvira in her various moments of angst, self-reflection and self-hatred, all projected. You can see why would love this.

But why is Elvira this way? Well, there’s the Catholic Church and the nuns…much convenient whipping girls, so there is an extended scene in which Red Zora brings Elvira back to the orphanage where he…before he became a she…was raised, for a meeting with Sister Gudrun (Joan MacIntosh) who attempts to explain Elvira’s childhood, but the good sister has a problem…she wanders, not verbally but physically. She disappears from the stage, walks dark, unseen corridors as her voice fades, then reappears through a door, only to disappear again, still babbling plot points. It’s gripping. This is what theater is all about.

Monitors flash – an interview with Fassbinder is projected – the play becomes a film then reverts back to a play – there’s trouble in Chile (Allende is elected but President Nixon doesn’t like that) – Jean D’Arc is about to become a martyr – and Elvira wanders into an arcade where males, whom she desires (Oh, love sweet love) are playing violent video games, their “guns” in their hands, shooting and killing.

It’s all an odyssey of sorts, a travel-through-demonic-times that leads the confused Elvira to the office building where Herr Saitz, with offices on the 16th floor, now reigns supreme, but before she can confront him (in an “I-did-this-all-for-you” scene), she finds herself on the 15th floor, where a man with a well-equipped briefcase is set on committing suicide. They have a trenchant conversation about being and nothingness and then he blows his brains out, but we’re used to the blood, because we’ve already been to an abattoir where blood has dripped from the ceiling and bloody pig-people have been carried hither and yon. Oh society, oh Bartleby!

So if, of late, as you have been driving (well, crawling) home from work on I-95 or been standing in line at the local supermarket thinking you want to decapitate the check-out person, or have been struck by a sudden sense of ennui, if the BIG questions about life, love and the meaning of it all have been recently bedeviling you, I urge you to hasten down to the Yale Repertory Theatre where it will all be explained to you. All will become clear as the human condition is laid bare for you. Unfortunately, the theater doesn’t provide strychnine, so you’ll have to bring your own supply.