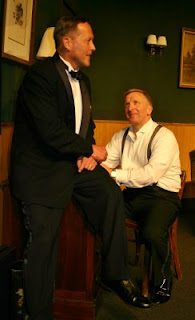 It’s a difficult task to walk in your father’s shoes or, for that matter, wear his tuxedo, (excuse me, dinner jacket), or so playwright A. R. Gurney would have it in his 2011 “Black Tie,” currently on the boards at ’s Square One Theatre Company. Since it’s Gurney you know we’re going to be in WASP-land and we’re going to see what makes this specific sub-species flit, fidget and (only occasionally) sting, and though there will be a bit of dissection, there will also be a moment or two of…well…on the other hand, perhaps they aren’t as bad as all that. No surprises here in this workmanlike production that is slow to start fluttering its wings and is held back from soaring by, in many cases, actors delivering lines in an overly studied manner. Thus, Square One offers a pleasant enough evening of theater, under the direction of its artistic director Tom Holehan, that holds the audience’s interest but never seems to totally engage both mind and heart.

What’s the premise? Well, Curtis (David Victor) and Mimi (Janet Rathert) have a son, Teddy, (Jim Buffone), who is about to get married to a young lady named Maya, and the couple is hosting the pre-ceremony rehearsal dinner in the Ticonderoga Room of a somewhat seedy hotel (it’s the only hotel that has enough rooms to accommodate the guests). The only problem, at least initially, is Victor is Dad-haunted, for not only has he chosen to wear his father’s tux…dinner jacket…to the event, he is holding an ongoing conversation with his deceased Father (John Bachelder) as he prepares for the event. Dad, also dressed in a tux, is there in the room with him, commenting on everything from the proper name for their formal eveningwear to how to keep the younger guests from getting pie-eyed, all the while quoting Byron, Chaucer and Conrad in a Polonius-like manner. Dad is, in essence, an insufferable prig, and middle-aged Victor is still the dutiful son, applauding (or at least not contradicting) whenever Dad issues forth with another bromide.

There’s not much spark or juice here, especially since the actors seem to be playing the “You say your line then I’ll say mine” game. This delivery of lines rather than creation of conversations continues when Mimi comes upon the scene and is not broken until late in this one-act play when Teddy, clothed in a bathrobe, knocks on the door of his parent’s hotel room to tell of troubles brewing between the lovebirds. It is in this extended scene that we actually hear and see people rather than actors interacting. Elise (Alisson Wood), the couple’s daughter, does a bit to enliven some moments, but the actress has a habit of delivering every other line with here hands raised, palms turned inward, fingers splayed, that becomes distracting only because it seems to serve all emotional purposes…it’s a visual “Like…I mean…”

Oddly enough, the play’s most vivid character, Maya, the bride-to-be, is never seen, but her shenanigans as a mini-bridezilla and her take on the quirks, idiosyncrasies and prejudices of her intended’s milieu are reported on by Elsie and Teddy and, after a while, you ache to have her appear, if only to stir up the Brahmin-folk a bit more.

What the play is really about, or attempts to be about, is shifting standards and the ability (or inability) to change, as well as acceptance or rejection of the rules-to-live by inculcated in the young at such an early age that it takes decades to even challenge them, but it all seems surface flutter. In the end, there’s really nothing more up for grabs than the success or failure of a rehearsal dinner.

Curtis’s final rejection of his father’s black tie and dinner jacket holds no greater import than that of a dieter’s rejection of a Twinkie…because he does it without the Dad-ghost present to comment on or react to the rejection, something that the play has been building towards but, alas, does not deliver. In the end, father-son voices are never raised, there is no confrontation, hence no catharsis for either the characters or the audience.