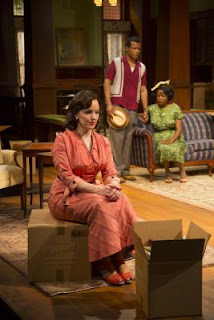 Near the end of Lorraine Hansberry’s 1959 breakthrough play, “A Raisin in the Sun,” Karl Lindner, a representative from the homeowner’s association of a white neighborhood, visits a black family, the Youngers, who have just bought a house in his exclusively white enclave. He has come to essentially bribe them not to move in. Mama Younger rejects his offer, and as the frustrated Linder leaves he says to her, “I sure hope you people know what you are doing.” They do, and they don’t, but they are determined to move into a house located in ’s .

As the lights go down on “A Raisin in the Sun,” questions arise. What happened to the Younger family after they moved? Why was the owner of the house willing to sell to a black family? What was the impact on when the Youngers moved in? Well, years after the play opened, a young man saw the film version of Hansberry’s play while in the seventh grade, and the experience stayed with him. That young man, Bruce Norris, grew up to become a playwright, and in 2010 his play, “ ,” premiered at Playwrights Horizons in . Subsequently, it went on to win the 2011 Pulitzer Prize for Drama and the 2012 Tony Award for Best Play, and it is now playing at Long Wharf Theatre. If you have any interest in live theater, then I suggest you wend your way down to New Haven, because if you don’t you may miss one of the finest productions of the season.

What is “” about? Well, to play off the title of a famous Raymond Carver short story, it deals with, among other things, what we talk about when we talk about race, and, as with Carver’s story (which was about “love”), when we talk about race the conversation is often elliptical. In other words, we dance around the issue, speaking in euphemisms, fully aware that what we really want to say might be deemed offensive, so we pull our punches and, in the process, tie ourselves up into a conversational knot even Alexander the Great would have difficulty cutting through. Such is the thrust of both acts of this dynamic, biting, funny play that never ceases to entertain as it also challenges and disturbs.

Under the sharp, insightful direction of ’s associate artistic director Eric Ting, who is not afraid to have his actors bite into each other’s lines, the stellar ensemble cast creates moments of tension tinged with hilarity…or…hilarity tinged with tension. It’s difficult, sometimes, to parse what you are actually feeling as each of the two acts rapidly unfolds, for Norris deftly plays on the audience’s emotions, using humor, pathos and confrontation to create a roller-coaster ride that evokes laughter one moment, shock the next.

The two acts are mirrors of each other, and intentionally so. In the first, which takes place in 1959, Norris focuses on the white family that, unwittingly, has sold their house to a black family. In the opening scene, the father, Russ (Daniel Jenkins), is listlessly leafing through a copy of “National Geographic” and eating spoonfuls of Neapolitan ice cream. His wife, Bev (Alice Ripley), concerned by his lethargy three days before they are going to move, engages him in a conversation about why his ice cream is called what it is. What follows is an extended and, at the time, apparently somewhat aimless chat about the names of cities and the collective names of the people who live in these cities. The conversation seems initially beside the point, as in, let’s get the play going, but what Norris is doing here is establishing one of the play’s basic themes: the names we give to things are important; what we call people is important. 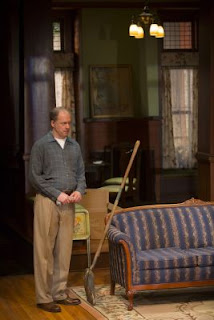 As the conversation unfolds it slowly becomes apparent that there is a dark cloud hovering over this couple involving the death of their son. Bev wants to move on but Russ can’t. He is mired in guilt and remorse. Into this tense atmosphere, Norris inserts a black maid, Francine (Melle Powers), her husband Albert (Leroy McClain), Jim (Jimmy Davis), a minister and friend of the family, and Karl (Alex Moggridge), the same Karl who in Hansberry’s play tried to bribe the Younger family, and Karl’s deaf wife, Betsy (Lucy Owen). 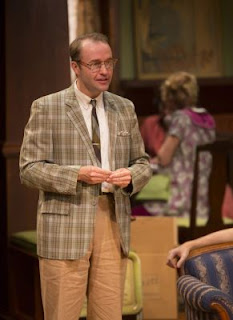 What follows is a confluence of emotions dealing with race, guilt, war and, of course, the words we use as we try to speak to each other through the cheese cloth of social propriety. As the act unfolds, what were embers at the start burst into flames and the audience is swept up into a conflagration of emotions that threatens to become a wildfire. It’s heady, engaging stuff. I sensed the audience members edging forward in their seats as the human beings on stage attempted to control their fear, anger, frustration and urge to strike out. Yet, to playwright Norris’s credit, and Ting’s, there is laughter interspersed with the gasps. Attend to what is happening and it is emotionally draining. 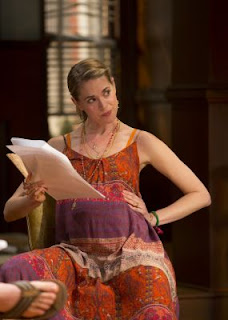 The second act, as noted, is a mirror of the first, but we are on the other side of the mirror, for it is now 2009, and has gone through many changes since the Younger family moved in. White families fled to the suburbs and as they did more black families moved in, and crime, drugs and violence followed. The neighborhood deteriorated and property values plummeted but in 2009 the gentry has grown tired of commuting back into the city so is once again becoming prime real estate. The house that the Younger family moved into some 50 years ago is owned by a black couple who are in the process of selling it to a white couple…gentrification is on the rise.

The second act starts with idle conversation, as did the first, but once again there is underlying tension as the white couple, Steve (Moggridge) and Lindsay (Owen), accompanied by their lawyer Kathy (Ripley) and the real estate agent, Steve (Davis), review terms of the sale with property owners Kevin (McClain) and Lena (Powers), as handyman Dan (Jenkins) works outside to build a fish pool for the new owners. Again, phatic conversation soon becomes heated as the characters delve into motivations and rooted prejudices. Emotions escalate as the veneer of social correctness is shattered and age-old racial conflicts, parsed in new terminology, inflame, while Dan digs in the back garden, eventually uncovering a trunk that will lead to the play’s coda.

As with the first act, so with the second: a seemingly simple situation is revealed to be fraught with racial underpinnings that evoke sharp emotions, and once again the audience members are pulled forward as the jousting intensifies. The terms of the argument have changed, but the argument’s essence remains the same: how, in , do whites and blacks find a common ground? How can members of each race shed the literal and figurative chains of the past and move forward?

Difficult as it is to single out any particular performance, the ensemble being as strong as it is, in the first act, the eye is drawn to Jenkins’ Russ, who is a smoldering volcano of emotions threatening to erupt at any moment, while Moggridge’s Karl is a wonder to behold as he walks a tightrope tethered at one end by racism and at the other by politesse. In the second act, Owen comes to the fore, giving us a pregnant (she has the body language down perfectly), oh-so politically correct urban sophisticate jousting with Powers’ , equally sharp-tongued, who also volleys with Moggridge’s Steve, again charged with walking the tightrope.

After the white heat of the play’s closing moments, the coda comes as a reminder of the defining moment that drove Russ and Bev to put their house on the market, which allowed the Younger family to move into , which was the catalyst for all that follows. It is a fitting denouement to an evening of intelligent, sharply written and superbly acted theater.