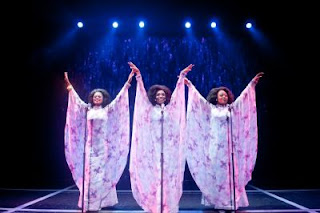 Every so often, and it’s rare, the Ivoryton Playhouse bites off a bit more than it can produce, especially when it takes on “big” musicals, but such is not the case with its production of “Dreamgirls.” Blessed with a fantastic cast superbly directed by Lawrence Thelen and deftly choreographed by Todd L. Underwoood, this show pleases on just about every level. At the curtain call the cast got the obligatory standing “O,” but in this case it was more than well deserved.

The musical, with music by Henry Krieger and lyrics and book by Tom Eyen, opened on Broadway in December, 1981, won six Tony Awards, and was subsequently made into a film. It tells the story of a three-girl singing group (a la The Supremes and the Shirelles) attempting to find both their style and their “voice” as they deal with demanding managers, record company executives, the pay-offs that grease the palms to get songs played on the radio and their own emotional development.

The plot is simplistic – girls want to achieve – girls fail early – girls fight back and find success – girls start “bitchin’” at each other (mostly over men – and who sings ‘lead’) – girls break up – girls come together in the end. Such is the stuff of Broadway and fluff, but it’s enjoyable fluff. So, it’s not gripping drama, but the songs, and how they are delivered, are what this show is all about, and Ivoryton has managed to gather together a host of talented actors who know how to sell the songs they are given. They result is often mesmerizing.

“Dreamgirls” has gone though many iterations, and the version offered by Ivoryton is “Dreamgirls” lite, but that’s okay because it allows the songs to drive the show and the talent to shine. The brightest, if stellar power can be measured, is Sheniqua Denise Trotman as Effie, the disaffected Dreamgirl, the one who should be the lead singer, should get her man, but doesn’t, and has to reinvent herself. The role has been played by many divas, and it is often oversold, but Trotman never loses sight of the ache beneath the false bravado. Hence, her rendition of “I’m Not Going,” which often comes off as strident showcasing, is heartfelt and moving. She really makes you feel the need and the hurt…and the longing. It closes Act I and makes you want to come back for more. 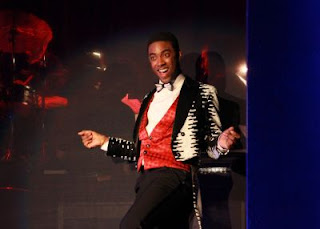 Caliaf St. Aubyn as Jimmy Early. Photo by Anne Hudson.
Then there’s . Aubyn as Jimmy “Thunder” Early (think James Brown morphing into Jackie Wilson). His performance as the Soul Brother who has to turn the funk down to play to the larger record-buying audience (read white audience) is a tour de force. He has the moves, he has the gyrations, he has the manner, he has the style.

Who else shines? Well, just travel out to Ivoryton, pick up a program and read down the “Cast of Characters.” This is a “big’ show in a relatively small theater, made more special by the efforts of lighting designer Marcus Abbott. Any problems? Well, sitting in the balcony it was often difficult to hear all of the dialogue. Whether this was because of speed of delivery or sound levels was difficult to determine. Frustrating, but overall a minor distraction.

I wouldn’t be surprised if Ivoryton decides to extend this run…word-of-mouth alone is going to create ticket demand. Right now, “Dreamgirls” runs through Sept. 1. For tickets or more information call 860-767-7318 or go to www.ivorytonplayhouse.org.
Posted by Geary Danihy at 6:49 PM