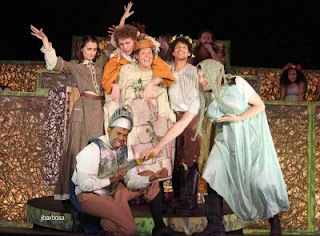 "The Mechanicals" -- photo by Judy Barbosa


This is not a suggestion, this is an order: go see CT Free Shakespeare’s production of “A Midsummer Night’s Dream.” You won’t regret it, for this is Shakespearean comedy as it should be played, broad and farcical, with the actors (and what a cast!) enjoying themselves almost as much as the audience members.

As directed by artistic director Ellen Lieberman, who also guided last year’s marvelous production of “Romeo and Juliet,” “Dream” is a non-stop delight from start to finish. The plot is classic Shakespeare: Lysander (Mark Friedlander – last year’s Romeo) loves Hermia (Caitlyn Chuckta), Helena (Rebekah Dunn) loves Demetrius (Brian Vaughan), but the course of true love is never smooth, for Hermia’s father, Egeus (Matthew Catalano) would rather see his daughter marry Demetrius. To make this happen, he calls upon Theseus, Duke of Athens (Andrew Spieker), who offers the rebellious lass three options: marry Demetrius, spend her life in a nunnery or death. Hermia and Lysander flee into the forest, a big mistake, followed swiftly by Helena and Demetrius, an even bigger mistake.

In the forest, Oberon (Jonathan Holtzman) and Titania (Saluda Camp), King and Queen of the fairies, are having a bit of a marital spat over a boy Titania has adopted. As husbands will, Oberon seeks to influence his wife by having her fall in love with the first creature she sets eyes upon. To accomplish this, Oberon instructs his servant, Puck (Eric Nyquist) to pick up some magic love drops. Yes, the drops will be used…a bit too liberally.

To complicate matters, a group of craftsmen under the direction of Peter Quince (an absolutely marvelous Uma Incrocci) are rehearsing a play, “Pyramus and Thisbe,” to be presented for the Duke at his wedding. The craftsman who is to have the starring role is one Nick Bottom (Ian Eaton), but alas, he runs afoul of Puck, who thinks it’s a great idea if Bottom should be graced with the head of a donkey. Once transformed, Bottom is, of course, the first person Titania sets eyes upon when she wakes. 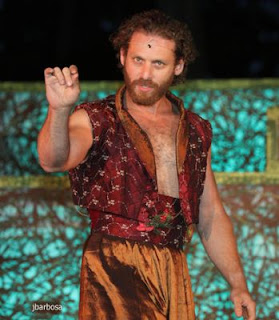 What follows is controlled, riotous confusion as lovers fall in and out of love with each other and the craftsman continue to rehearse. Of course, everything works out in the end, but not before the craftsmen get to present their play, one of the funniest set-pieces you will see this year.

Lieberman is also responsible for the adaptation, and she has nipped and tucked the five-act play so that it moves along handily – the whole shooting match, including the group’s signature intermission (which involves singing, dancing and audience participation) runs just slightly over two hours, concluding with the cast members, after the curtain call, coming out and joining the audience. If nothing else (and it is so much else) the show is extremely viewer-friendly.

As for the cast, well, you just couldn’t ask for a better ensemble, so much so that it is difficult – and possibly unfair – to praise any one cast member. Yet, among the many fine performances several deserve mention, the first being that of Eaton, whose Bottom is brash, pretentious and completely taken with himself. Once transformed by Puck, Eaton, now sporting donkey ears, simply owns just about every scene he is in. He plays to the crowd (fortunately not threatened by cutpurses or distracted by pie sellers) and the crowd eats it up. But there’s competition, especially from Incrocci, who is blessed with great timing and a knack for physical comedy (especially when it involves balloons – yes, balloons). Then there’s Stephen Humes, who plays Francis Flute and, in the play within a play, has the role of Thisbe, a role he artfully and hilariously struggles with (along with the aforementioned balloons), much to the delight of the audience.

All in all, CFS’s “Dream” is a wonderful piece of theater, one that will appeal to all age groups. The cast members give the impression that they are having a ball as they weave the magic of Shakespeare’s tale, and their enthusiasm and enjoyment is infectious, so much so that you can’t but walk away from the evening with a large, satisfied grin on your face.

“A Midsummer Night’s Dream” plays through August 4 on the grounds of the Shakespeare Festival Theater in Stratford (how sad to see what’s become of that once marvelous venue), and then moves to the McLevy Green in Bridgeport for performances running from August 7 through August 11. Admission is free but donations are accepted.


For more information go to www.ctfreeshakespeare.org.
Posted by Geary Danihy at 10:32 AM