"Grease" Rocks the House (or Tent) 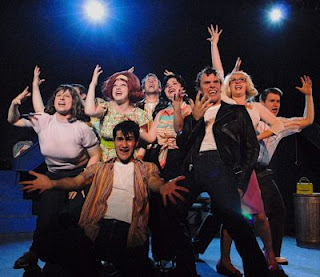 The cast of "Grease"


Looking for something to do of a summer evening? Well, you might want to consider taking the whole family over to in for an evening of rock-and-roll as served up by Summer Theatre of New Canaan’s production of the classic “Grease.” You might even have the opportunity to show your stuff with a hula hoop (for those of you who don’t know what a hula hoop is, simply understand that your elders were once as crazy as you are), or dance with the cast onstage. In essence, this “Grease” is a bright, breezy trip down that has been crafted by director Melody Meltrott Libonati to please just about every age group.

“Grease,” set in the 1950s at , opened on Broadway in 1971 and held the record for most performances until “A Chorus Line” came along several years later. The basic plot deals with the summer romance between Sandy Dumbrowski (Sharon Malane) and Danny Zuko (Christian Libonati) that founders on the rocks of a new school year and the roles the students are forced to play as members of various cliques within the school. Swirling around their on- and off-again relationship are such themes as gang violence, teen pregnancy and the ubiquitous teen angst and rebellion, but at STONC the harsher elements inherent in the original version have been, if not sanitized, at least toned down a bit. Though there’s still a touch of raunch, certainly not enough to bother the many “tweens’ who were in the audience the night I attended.

Setting the tone for the evening, before the  curtain Vince Fontaine (Jason Law), the oleaginous local dejay, entertains with patter and the aforementioned hula hoop contest, and then it’s off to the Rydell class reunion, which is almost immediately parodied as we go back in time and the Pink Ladies and Burger Palace boys introduce themselves, letting everyone know exactly how they feel about good old Rydell.

From that point on, you just hold on as director Libonati puts the talented cast members through their paces, performing with brio such numbers as “Summer Nights,” “Greased Lightnin’,” “We Go Together,” and the over-the-top “Born to Hand Jive.”  Choreographer Doug Chapman has done a fine job with this young cast, utilizing whatever room there is on the relatively restricted stage to full effect as the well-drilled cast shucks and jives.

As effective as the “big’ numbers are, it’s the softer ballads that seem to stand out the most. This is especially so for Malane’s “It’s Raining on Prom Night,” a heartfelt teen lament, and Cristina Farruggia as Rizzo is saucy and sarcastic as she delivers “Look at Me, I’m Sandra Dee” and absolutely nails “There Are Worse Things I Could Do” – in fact, it’s the stand-out number of the evening. Running a close second is Adam Hill’s version of “Beauty School Dorpout,” as Teen Angel counsels Frenchy (Sarah Mullis) to give up her dreams about becoming a hair stylist.

The main focus, of course, is on the budding romance between and Danny, and Malane and Christian Libonati work up a nice chemistry as they find their way to true romance. Libonati’s Danny preens and cock-walks when appropriate, then turns affectionately boyish when alone with Sandy, save for his aborted attempt at making out at the drive-in, when Sandy unintentionally punishes him for his raging hormones.

The audience-embracing feel that director Libonati has created extends beyond the reprise of “We Go Together,” as the cast members come down into the audience and invite both young and old to join them back up on the stage for an impromptu high school hop. All in all, a great way to spend a soft summer evening.