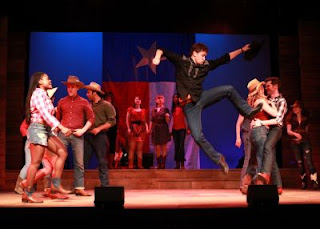 The cast of "Footloose"


Some musicals translate well from the screen to the stage and some don’t, and vice versa. “Rent” soared on Broadway and bombed in the multiplexes; “Mamma Mia” and “Hairspray” were hits in both mediums, and then there’s “Footloose,” the 1984 film starring Kevin Bacon that reappeared as a musical on Broadway in 1998 to mixed reviews. This surface treatment of teenage angst and small-town repression is now on the boards at the Ivorytown Playhouse and though it pleases on several levels the material itself limits the degree to which the audience can be drawn into the story.

For those who are separated by more than six degrees from Kevin Bacon, “Footloose” deals with a teenage boy, Ren McCormack (Cody Ryan) who, after his father abandons him and his mother, Ethel (Elise Arsenault), is forced to move to a Midwestern town called Bomont where, five years ago, because of a tragic car accident, the town council, at the urgings of Rev. Shaw Moore (Edward Juvier), passed numerous ordinances including one disallowing any dancing within the city limits. Ren, however, is something of a dancing fool, and soon he and the good Reverend come into conflict. Rev. Shaw also has other problems – his righteousness has alienated him from both his wife, Vi (Traci Blair) and his teenage daughter, Ariel (Zoe Kassay), who, in full rebellion, is dating Chuck Cranston (Michael Wright), one of the town’s low-lives. Thus the stage is set for a lot of parent-child confrontations, pious pronouncements and pompous sermonizing that eventually lead to reconciliation, remorse and redemption.

Oddly enough, in a show whose focus is the sturm und drang of teenagedom, it’s the adults who come off the best, for under Richard Amelius’s direction (he also choreographed the show) we have two approaches to acting: the adults, by and large, play it straight, and are effective, while the younger members of the cast are allowed to swing for the stands, and, save for Patrick H. Dunn as Willard Hewitt, hit few home runs.

It’s billed as a rock-and-roll musical, but it’s the more quiet numbers that work the best, especially “Learning to be Silent,” sung by the two mothers, Ethel and Vi, and Vi’s “Can You Find It in Your Heart,” and although Juvier lays it on a bit thick in his opening sermon as he demonizes rock-and-roll, he settles nicely into his role and, at the end of the show gives a moving performance with “I Confess.”

But it’s the kids, gull-dang-it, who present problems (ain’t that just like kids?). By and large, they are just too conscious of having to act like rebellious teenagers to be believable as rebellious teenagers. The lead in this area is Wright, who seems to be channeling Snidely Whiplash as he sneers and takes just a bit too much delight in being nasty.  Admittedly, there’s a lot of energy up there on the stage but it often seems just a bit uncoordinated. However, when it does come together, as in “Holding Out for a Hero, “Let’s Hear it for the Boy” and “Mama Says” toes start to tap and heads nod with the beat.

All in all, “Footloose” is a pleasant enough way to spend a summer afternoon or evening. You won’t come away overwhelmed, but there will be one or more tunes that you’ll find yourself humming the next day.