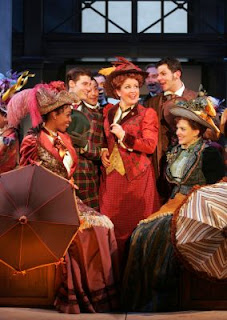 Klea Blackhurst and the cast of "Hello, Dolly!" Photo by Diane Sobolewski


Goodspeed Opera House is known internationally for its ability to produce “big” shows in a relatively confined space, and this skill is manifest in its current production of “Hello, Dolly!” a rollicking, fast-paced presentation of one of ’s classic musical comedies. As my play-going partner put it after seeing the show on Saturday, “The audience walked out of ‘Hello, Dolly!’ with a skip in their step.”

Much of that “skip” is there because director Daniel Goldstein is obviously intent on “working” the audience whenever he can, hence, in the opening number, Dolly Gallagher Levi (Klea Blackhurst) makes her first appearance not on stage but in one of the aisles, handing out business cards. The space is also used late in the first act to make the “Parade Passes By” number seem bigger than it really is.

“Bigger than it really is” might be the operative phrase for the entire production, for, along with Goldstein, scenic designer Adrian W. Jones, lighting designer Jason Lyons and choreographer Kelli Barclay have accepted the stage’s limitations and done everything possible to overcome them. 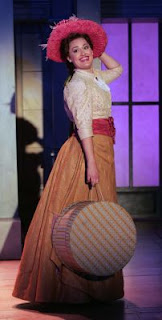 One of the biggest challenges in producing “Hello, Dolly!” is the “Put on Your Sunday Clothes” number, which starts in a feed and grain store in Yonkers and ends up, via a train ride, in New York City. As the number began, I was wondering just how they were going to pull it off. Well, I needn’t have worried, for Jones turns the store’s shelving into railroad car seats, gives us running lights projected onto a rear scrim and Barclay has the cast members swaying and bouncing. In essence, it works beautifully.

Then there’s the “Waiters’ Galop” number, which is a lead-in to the show’s signature “Hello, Dolly,” when the meddling matchmaker makes her triumphant return to the Harmonia Gardens Restaurant. Again, the question arose in my mind – how are they going to give this number the “bigness” it requires? Once again, no worries. Using every foot of stage available and a stairway set stage center, Barclay works some magic, making you believe that the dancers are moving through space twice as large as they really are. Trays, food and dishes fly and napkins and aprons wave and flutter in a bravura sequence worthy of comparison to that of any of the show’s Broadway productions. 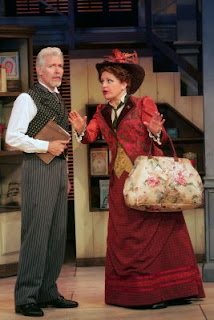 Goldstein, Jones and Barclay were also obviously committed to keeping this show moving, and it does. Scene changes take mere moments and the cast members seem to appear here, there and everywhere, often in different costumes, as if they have been transported, which means that backstage, where space is also limited, there has to be a feeling of controlled chaos.

As for the performances themselves, there’s little more you can ask for. Blackhurst creates a Dolly that’s all her own, yet with just than a touch of Merman and a pinch of Middler thrown in for good measure. That Dolly is as delightfully manipulative as she is owes a lot to the show’s Horace Vandergelder, Tony Sheldon (on his first appearance you quickly check your program to see if, perhaps, Goodspeed has somehow gotten Christopher Plummer to play the role). Sheldon is a master of the slow burn, the double-take and the startled shuffle, all of which he employs to great effect.

In support, there’s Ashley Brown as Irene Murphy, an actress who lights up the stage with her eyes and her smile, and Vandergelder’s two clerks, Spencer Moses as Cornelius Hackl and Jeremy Moss as Barnaby Tucker, who are both engagingly naïve.

However, the show is Blackhurst’s to own, and she does, no more so than in the lead-in to the courtroom scene when she is able to get extended laughs by disregarding all others on stage as she blithely devours an ear of corn…and then some dumplings. The moment is priceless.

Goodspeed’s “Hello, Dolly!” is the perfect show to make you forget about the oppressive heat and humidity. It’s light, frothy and a whole lot of fun.