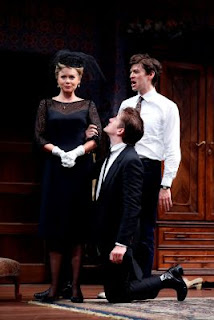 There will be mixed reactions to playwright Joe Orton’s “Loot,” which recently opened at the Westport Country Playhouse, as there were in its first and second iterations in almost half a century ago. It was panned when it was first produced in 1965, Orton did substantial revisions, and it was praised the following year. Reasons for both the panning and the praising are evident in this production directed by David Kennedy, which is an amalgam of slapstick farce, black comedy, anti-Catholicism, thinly veiled social protest and less thinly veiled misogyny.

Orton’s penchant for black comedy led to the coining of “Ortonesque” to describe works of this ilk, but in “Loot” a more familiar term might also apply -- “Kafkaesque” – for as the play unfolds one can’t help but hear echoes of “The Trial” and “In the Penal Colony,” for behind the humor there is substantial existential angst born of the human need to make sense of what is, ultimately, senseless, that and  a great deal of suppressed anger.

It all starts with a coffin and the body inside, the wife of Mr. McLeavy (John Horton). Mr. McLeavy’s grief at the passing of his wife is quickly challenged by Fay (Liv Rooth), the young nurse hired to tend to the wife in her last days, for she suggests the cure for his grief is to marry quickly – and marry her. But there is more afoot, for McLeavy’s son, Hal (Devin Norik), along with Dennis (Zach Wagner), have just dug through the walls of the funeral parlor handling Mrs. McLeavy’s funeral to rob a bank. The money is now stashed in a wardrobe standing behind the casket in what is apparently the front parlor of the McLeavy home, but soon the mother’s body is in the wardrobe and the cash is in the coffin. 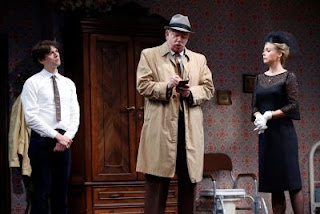 Orton’s real intent with all of this doesn’t come into clear focus until the appearance of Truscott (David Manis), who claims to be an inspector from the local Water Board but acts like a detective. Whatever his authority, he is a representative of the State, the mindless bureaucracy that creates conflicting regulations and operates outside of the confines of logic. Truscott’s method of “investigating” is to ask a series of non sequitur questions, create confusion, and then draw inane conclusions that have little to do with reality. And yet, he bears the power of the State – the power to have someone incarcerated for no reason, the power to have someone brutally interrogated -- in essence, the power to destroy lives. 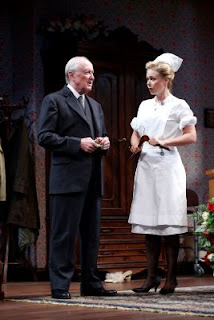 But that’s not all that’s going on here, for Orton is also sending up the clichés of mystery fiction: the deductive reasoning of a Sherlock Holmes; the “little detail” analysis of everyday minutia of a Miss Marple.

Does it work? Well, yes and no. There are some very humorous moments as Mrs. McLeavy’s body is carted about and Truscott bandies words with possible suspects of ill-defined crimes. In fact, much of the humor involves the simple shtick of “follow-the-bouncing-body.” Yet, since director Kennedy has opted to play it for laughs (allowing his actors occasionally to do some heavy emoting), rather than play it serious, or for real, and let the laughs come as they may, you get the feeling that this production is trying too hard to be too many things to too many people.

And then there is the misogyny. There are two women in the play – one fully seen and the other seen in only body parts. The one fully seen, Fay, has had seven husbands in 10 years, all of them dying under suspicious circumstances. She is basically a succubus, a Lilith, i.e., a female demon. The other woman – the deceased Mrs. McLeavy – has her body tossed about like a bag of Fritos at a frat party, and although her husband is supposed to be grieving over her demise, he bursts out at one point that even from the grave her viperfish tongue is doing him harm, and then there’s a line Truscott delivers late in the second act about women and intelligence that evoked more groans than laughter from the audience.

There are those who have suggested that comedy is nothing more than pain wrapped up with a bright red bow. There are a lot of “funny” lines and smile-inducing moments in “Loot,” but lurking beneath is pain, and it’s the pain that this production hasn’t confronted. Everyone seems to be playing it for laughs, but Orton dealt with the abyss that lurks beneath the laughter, and it’s the abyss that’s missing, the tender terror the playwright was trying to express that is not captured.

When something strikes us as really funny, when we roll back and roar, tears come to our eyes. Those tears speak to the essence of humor. You slip on a banana peel and it’s funny, until you have to go through physical therapy. This production of “Loot” goes for the laughs and misses the tears…and the depth of Orton’s anger, frustration, fears and hang-ups.

“Loot” runs through August 3. For tickets or more information call 203-227-4177 or go to www.westportplayhouse.org
Posted by Geary Danihy at 1:55 PM