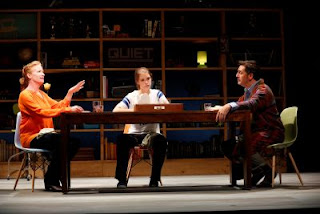 Dialogue evolves from character. Whether it’s “To be or not to be,” “I have always depended on the kindness of strangers,” or “Frankly, my dear, I don’t give a damn,” you know when you hear the words that this character, in this situation, is speaking his or her truth, or at least what he or she believes truth to be. Then there are words, be they ever so well written, that are spoken by an actor on stage that just don’t seem to be coming from the character speaking them. You can sense what you are hearing is the playwright’s voice, not the character’s. Such is the case with many of the lines delivered in “Oblivion,” a humorous and, at moments, insightful play by Carly Mensch receiving its world premiere at the Westport Country Playhouse. Parts work. Yet, the whole is less than the sum of its parts.
The play, directed with a good sense of pacing and character interaction by Mark Brokaw, deals with a nuclear family consisting of a father, Dixon (Reg Rogers), a burnt-out lawyer now ostensibly writing a novel that will expose the evils of the legal profession (a la Grisham), a mother, Pam (Johanna Day), a television producer, their rebellious daughter, Julie (Katie Broad), and her high school friend, Bernard (Aidan Kunze), an erstwhile filmmaker with a fixation on the film critic Pauline Kael. 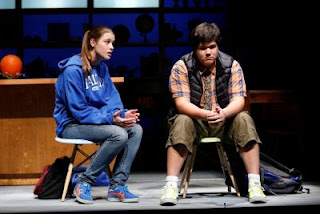 There’s trouble in the family, ostensibly because Julie is a teenager and, well, by definition…but it goes deeper than that, for Mom and Dad are freethinkers, of a sort, and Julie has just discovered religion…actually, she’s just discovered Jesus, via Bernard, who is, himself, not too sure about the whole religious thing but is willing to go along for the ride because he loves Julie.
Conflict abounds…Mom and Dad have different views on parenting, and different views on Julie’s sudden fascination with religion, and different views on, well, just about everything, and Julie, well she has shifting views on her parents and God and sex and love and kissing and…well, just about everything a teenager might fixate on…including the kitchen sink. No, sorry, she has no thoughts on the kitchen sink…or, at least, if she does, they aren’t expressed.
As the atoms in this nuclear family whirl about each other, Mensch creates many moments that ring true and elicit laughter, but it soon becomes clear that the playwright is taking on a bit too much: too many themes, too many roads down which her characters half-travel but never arrive at a clear destination. There’s religion and teenage angst and rebellion, mid-life crisis and ennui, marital infidelity (real or imagined)…and filmmaking, both its theory and practice. In the end, which has Bernard screening his first film, there is supposed to be some kind of resolution, the nature of which remains to be seen. 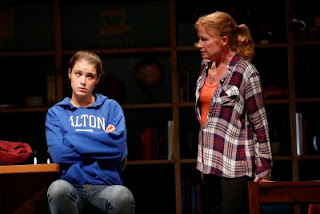 The show, however, by and large works, and that is to the credit of the four actors who work well together and generate more steam and heat than the dialogue often allows. Broad gives the audience a perfect example of a teenage girl in faux crisis, with appropriate facial expressions and body language that convey her disdain for anything her parents might suggest, and Day and Rogers are a believable middle-aged couple trying to find again the reasons they once came together. Most of the heavy, playwright-thinking dialogue falls upon Kunze to deliver, and he does what he can with it, but you sense that no teenager, no matter how cinema-smitten, would ever utter these words (or not know that his idol, Kael, has gone off to the big screening room in the sky).
“Oblivion” makes several strong rushes down the runway but never truly lifts off. That is perhaps because the play is unsure of its destination, which was obvious from the audience reaction when it finally realized, “Well, that’s all folks.” Yes, but what about God and religion and…well, everything else that was on Mensch’s mind when she sat down to write her play? All answered with a black-out, which might be translated as a cop-out.
“Oblivion” runs through September 8. For tickets or more information call 203-227-4177 or go to www.westportcountryplayhouse.org.
Posted by Geary Danihy at 6:46 AM