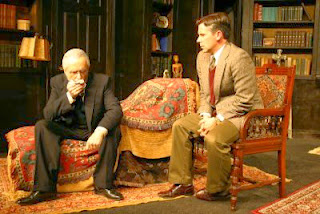 
There’s much that goes into a theater’s decision as to what plays to present during a season, especially for a community theater such as ’s Square One: Do we have the budget -- and the talent available – to board this play? Will the audience be interested? Will the audience even understand it? Often, decisions err on the side of pabulum, the “Let’s play it safe” route. To give credit where credit is due, Square One’s artistic director Tom Holehan often eschews the safe route, as he has done with this year’s first offering, Mark St. Germain’s “Freud’s Last Session.” He’s taking a chance here – after all, the play is basically a 72-minute conversation between British novelist C. S. Lewis (he of “Narnia” fame) and an aging, ill Sigmund Freud. Can you imagine pitching this concept to some mogul? You’d get thrown out on your ear. But, it works, and works handsomely, much to the credit of all involved.

The setting is , 1939. Hitler has just invaded and the war clouds that have been darkening the European sky for several years are now swirling to form a thunderstorm. The lights are starting to go off…and may not come back on, if they ever do, for many years. On the eve of World War II, C. S. Lewis has been invited by Sigmund Freud, who has fled the Nazi threat for the relative safety of , to drop by for a conversation. They meet in Freud’s office, lovingly recreated by Freud’s daughter, Anna, herself now a psychiatrist, to reflect Freud’s old digs.  The two men tentatively greet each other and begin to talk. The conversation is polite at first, but these two men hold passionate, contradictory beliefs, and their interaction soon becomes heated as each man challenges the other about what they hold to be true.

Holehan, who also directs this piece, seems to understand that the play is, in its own way, a tone poem – think Richard Strauss’s “Ein Heldenleben” or, perhaps more appropriately, “Death and Transfiguration.”  It starts slowly, themes are established, the emotional level rises, then falls, then rises again until there is a climax – which is both physical and intellectual – followed by a falling off and a fitting, poignant denouement.

And why does this project have an element of risk? Well, these two characters, Lewis (Gabriel Morrow) and Freud (Al Kulcsar) do not dally about with small talk; there are no slamming doors and pratfalls, no singing Hitlers, no bountiful bimbos to distract the audience. Instead, we have a give-and-take between two men of intellect and probity about the existence of God, the nature of good and evil, the possibility of an afterlife, the essence of religion and the almost impossible challenge to justify a loving God in a world of suffering, pain and death, a world that is about to plunge itself into an orgy of unbridled cruelty.

The early moments of the play seem to have a drag-anchor on them, for Kulcsar is a bit  emotionless in the delivery of his lines, as if he is aware that he is playing Freud rather than that he is Freud. Morrow, on the other hand, is, from the moment he walks onto the stage the epitome of the religious convert, eager to speak his piece yet aware that he is in the presence of, well, a legend. Fortunately, Kulcsar’s stiffness disappears and he soon becomes a man who must defend his beliefs against everything he finds irrational and inane, defend them verbally, even though he finds it difficult, at times, to speak, for he reveals, ever so slowly, first with hand gestures and then with body language, that his character is suffering from mouth cancer. There have been multiple operations and a prosthetic device now bedevils and tortures him. His character, in the end, rises to noble heights as he fights against pain yet still must “talk,” must argue, must question…and, ultimately, must consider, and ponder, the possibilities.

Morrow is dead-on throughout, giving us a man who is the product of the British public school system who passed through the alembic of WWI and came away seeking answers, or, if not answers, at least emotional and spiritual solace, solace that he has found in Christianity – he now, ecstatically, believes that God is manifest in everything; we just have to have the “eyes’ to see said manifestations. Morrow gives us an edgy and bouncy Lewis, a man who seems he must constantly control the energy, or agony, that surges beneath. One wonders, was there some discussion during rehearsals that Lewis, having undergone the horror of WWI, could not remain still, that what we are seeing in Morrow’s constant movement, his bouncing up and down, hands in and out of trouser pockets, is the after-effects of having endured trench warfare? Don’t want to slip into Intentional-Fallacy-land here, but however this physical manifestation of being on the edge got there in Morrow’s portrayal of Lewis, it works and works well, providing a lot of the play’s edginess and energy.

In an age when entertainment is often measured by the size and volume of the explosions or the level of visceral cruelty splashed across the screen, it’s nice (and good for the soul) to settle in and watch two characters struggle with topics that we all, in the dark, attempt to deal with: the nature of life, the dread of death, and the need for belief in something or someone who possibly has all of the answers, has a plan...or simply cares for us. We all seek to justify our own existence, and “Freud’s Last Session” is an artistic attempt to, if not resolve our conflicts and doubts, at least get them out there on the table, and that is one of the things theater is all about.