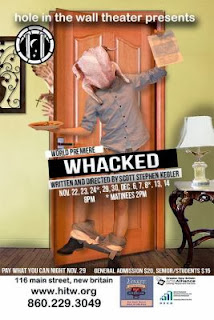 How many euphemisms can you come up with for “masturbation”? If hard pressed, I could probably offer five or six, but playwright Scott Stephen Kegler has apparently done his research and, well, it’s all on display in the somewhat sophomoric “Whacked,” which recently saw its world premiere at ’s Hole in the Wall Theater. This one-trick-pony sex comedy could easily have been written while lounging in a boy’s locker room at a local high school – it’s all snicker and nudge-nudge about the fact that the human animal indulges in sex and, shockingly, both the male and female of the species often auto-stimulate.

It’s coming on Thanksgiving, and Marta (Jenn Rykowski) returns home from grocery shopping to discover her husband, Jack (please!) whacking his weenie while staring at a picture he has downloaded off the Internet. It’s never exactly clear what this is a picture of, but it apparently involves a woman, some barbed wire and an animal (sounds stimulating). Marta screams, Jack (Devin Horner) trundles out into the living room with his pants down, and we’re off to the races as Marta expresses her disgust. Poor Jack is, for the moment, definitely persona non grata.

Ah, but the holiday is hard upon us, and Jack’s and Marta’s parents have been invited to partake of the turkey feast, so the couple must set aside (if they can) their problems to entertain. First to arrive are Marta’s parents, Alice (Kathleen-Marie Clark) and Hank (Bill Arnold), bearing holiday cheer and a bag full of clichés for, you see, Hank is a bit of a bore and an omnivore (he loves, among other things, the juice he guzzles from an open can of black olives), and dear Alice is a rather tiresome religious fundamentalist who just happens to be Catholic (and, of course, has a proclivity for the sauce – ah, the spirit is willing but the flesh is weak).

As Hank noshes and  drinks, dithers, proclaims and pronounces, Jack’s parents arrive. Beth (Pan Riley) and David (Warren Dutkiewicz) seem normal at first, but there’s some sexual hanky-panky hiding in the couple’s closet that, once revealed, will drive Alice to a monomaniacal (and unbelievable) frenzy throughout most of the rest of the play.

That this is all a tempest in a tea pot goes without saying. As the Thanksgiving dinner progresses, each character gets to ride his or her hobby horse for all it’s worth, and most get to run off a string of the aforementioned euphemisms for Onan’s sin. Playwright Kegler, who also directs, throws in a conflicted priest (can there be any other?), Father Lawrence (Ryan Wantroba) and Jesus Christ – well, someone playing the Lord called “Jesus” Bill (Roy Donnelly), complete with a crown of thorns and a cell phone.

And what is all of this leading up to? What is the grand revelation? Well, at the end of the play we’re right back where we started – with the simple fact that human beings enjoy orgasms, no matter how they are arrived at or generated. Gee whiz.

The play has possibilities if Kegler had used sexual urges as a jumping off point for a more mature investigation of need, desire and relationships between couples, but it seems stuck in first gear – we never get beyond the titillating fact that humans enjoy sex (not much of a revelation), and that those of a certain religious bent have always had a problem with that reality. The dialogue is at times witty, but Kegler, in his role as director, seems to have forgotten that the essence of comedy is timing – there’s often just too much air between the lines as delivered by the actors – it’s as if Kegler was anticipating laughs and wanted to give some time for the uproar to die down before allowing his actors to proceed.

If you’re 14, male, and attempting to deal with pubescent urges you might find “Whacked” engaging. If you’ve successfully passed that stage you’ll simply wonder what all the fuss is about.

Received an interesting response to this review. In the interest of fairness, I offer my critic's comments unedited: