A Fine Production of "Fences" 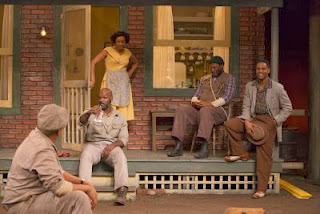 
Some men’s spirits are simply too large to be encompassed by the lives they are forced to live. They may seem on the surface to have accepted their diminished realities but inside their souls writhe, yearn to break free, to, in the parlance of August ’s “Fences,” stop standing on first base and, for once in their lives, steal second. Troy Maxson is such a man, and in ’s fine production of ’s Pulitzer Prize and Tony award-winning play, he comes fully to life, as do his family and friends under Phylicia Rashad’s strong and nuanced direction, creating a gripping, heart-wrenching theatrical experience.
It’s Pittsburgh, 1957…the Hill District…and Troy Maxson (Esau Pritchett) and Jim Bono (Phil McGleason) are coming home from hauling garbage, back to Maxson’s house, a ramshackle affair with a roof threatening to leak and a partially built wooden fence. They are two black men who met in prison and have found a way to survive in a world that will not see them for the men they are because of the color of their skin. Bono seems content with his lot but Maxson, a once superb baseball player, possesses large appetites and a well-defined if somewhat inflated sense of who he is and what he is capable of…and what he deserves from life. He is also a hyperbolic storyteller, at least when it comes to retailing his own exploits, both real and imagined (or mythical). 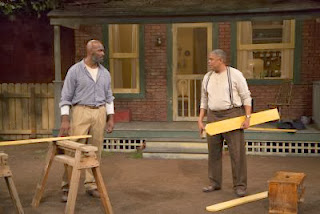 In marrying Rose (Portia) 17 years ago and siring a son, Cory (Chris Meyers), Maxson believes he has settled, and it rankles so that he has found solace and comfort in the arms of another woman A man beset by more than one demon, Maxson’s pride and need drive him to threaten the only stability he has known in his troubled life.
There are no fabricated heroes or villains in “Fences,” just real people dealing with the questions that whisper in their souls, questions about loyalty, responsibility, dreams, desires, betrayals and failures, and this strong cast, which includes Jared McNeil as Lyons (Maxson’s son from a previous liason), G. Alvarez Reid as Gabriel (Maxson’s brother, wounded in the Second World War), and the adorable Taylor Dior as Raynell (Maxson’s illegitimate daughter), creates a dynamic that is difficult to turn away from yet, at times, painful to watch, painful primarily because of Maxson’s penchant for self-destruction.
Pritchett gives a strong, highly nuanced performance as the conflicted father, easily and fluidly capturing the character’s pride, need and inner doubts. Whether he is once again telling the tale of his battle with the devil (read alter-ego), confronting his son about what he does or doesn’t owe the boy, or attempting to confess his philandering to his wife, Pritchett’s Maxson is mesmerizing. Yes, “larger then life’ is a cliché, but in this case it is apt. 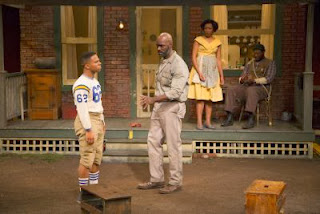 Confronted by such a dominating character, Portia more than holds her own, creating a Rose that is Maxon’s equal, a strong and resolute woman who, in the second act, confronts Maxson’s solipsistic view of their lives together and reveals the price Rose has paid to hold their marriage together while allowing Maxson to embrace his inflated sense of self. It’s a penetrating performance that pits Rose’s loyalty and firm convictions against Maxson’s bravado and bluster, a confrontation that eventually forces Maxson to confront his self-indulgent actions and, to a certain extent, feel shamed.
If there is a weakness in the play it is in its final moments, a coda of sorts, a denouement that seems to last just a bit too long as Rose delivers what is, in essence, a soliloquy on her husband that borders on hagiography. After the emotional fireworks of the second act it seems just a bit anti-climactic.
The play’s final moments aside, “Fences” delivers just about everything a playgoer might desire: a well-told tale dealing with complex characters created by actors well-honed in their craft. The show runs slightly over two hours but you won’t be aware of the passage of time, you’ll be totally diverted by what is happening on the stage. As the lady who accompanied me commented: “This is theater as it should be.” Absolutely.