The Hound of the Baskervilles -- Playhouse on Park -- Thru Dec. 22 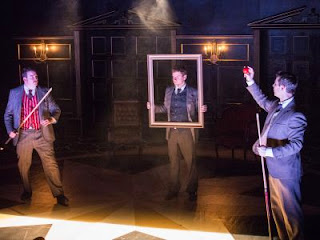 The game’s afoot up at Playhouse on Park in West Hartford, and so is the delightful silliness as Sherlock Holmes and the redoubtable (and somewhat confused) Dr. Watson puzzle out the mystery of “The Hound of the Baskervilles,” adapted from the Conan Doyle story by Steven Canny and John Nicholson with an eye towards a poke in the ribs and a pie in the face.

As directed by Tom Ridgely, this humorous romp announces its intentions from the play’s opening moments – a thunderclap, lightening (courtesy of lighting director Adam Frank) and a man dressed in dark clothes and top hat opens a gate as fog swirls about his feet. He walks, hears strange sounds, gasps, is attacked by unseen forces and falls dead. Oh, the horror! But wait…the lights come up as Sean Harris (the Playhouse’s artistic director, who will play Watson and various other characters) strides onto the stage. You see, the pre-curtain warnings and caveats about cell phones and exits have not been announced. Anyone in the audience who was getting ready to suspend his or her disbelief is given a rude awakening as the actors are introduced (along with their credits)  and a warning is given that dastardly deeds will be depicted in what follows, so those faint of heart (or suffering from low self-esteem) are urged to depart before the evening continues. In other words, we’re going to play fast and loose with dramatic conventions. By and large, it all works.

Those familiar with “The Mystery of Irma Vep” or the more recent “A Gentleman’s Guide to Love and Murder” will realize one of the draws of the “Hound” is to watch a limited number of actors take on multiple roles, often requiring rapid costume changes, but the “Hound” not only pokes fun at the Conan Doyle clichés, it also takes a swipe at its own theatrical sub-genre. Wishing to avoid ‘spoiler’ territory, let’s just say that quick costume changes require that the costumes are readily available rather than stored in a closet that also has the costumes and props for a children’s theatrical. Confused? It will all make sense as you watch the delightful confusion that opens the second act.

The play’s basic plot sticks fairly close to that of Conan Doyle’s story: there appears to be a curse on the male members of the Baskerville family – when wandering the moors (why they do so is a mystery in and of itself) they apparently fall prey to a huge hound from hell. The latest demise of one of the clan brings the last of the Baskervilles, Sir Henry (Brennan Caldwell), to to obtain the services of the renowned detective, Sherlock Holmes (Rich Hollman). Soon Holmes and Watson find themselves in Dartmoor at Baskerville Hall, where they finally unravel the mystery but, of course, the whodunit aspect of “Hound” plays second-fiddle to the fun of watching the actors take on various roles, fall in and out of character, confuse each other with spoonerism and malaprops and, in general, appear to have one hell of a time…as does the audience. 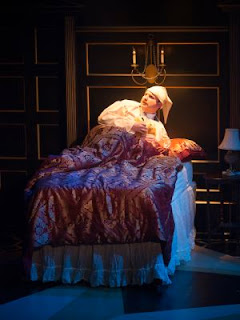 If there’s one drawback to  the evening it’s that the second act, fleshed out with the aforementioned costume quick-change romp, seems overly long – the play (with one intermission) runs well over two hours, a goodly amount of time to maintain the necessary farcical level. Some judicious editing might be called for here.

That being said, most of the evening flies by as the actors rush about creating a series of characters who never fail to tickle the funny bone. Along the way there are puns, jibes, witty asides, jests and some deft visual humor involving, among other things, a series of portraits, a window, Watson going on a shooting spree (listen closely to sounds made by his targets: everything from the Road Runner to Sarah Palin, no less)  and even some aggressive shrubbery.

If you’re looking to brighten up the winter drear, “The Hound of the Baskervilles” should do the trick. There’s nothing like a little bit of zany to warm the heart (several pre-show libations should get you into just the right mood).