In Praise of Our Oh-So Liberal Selves

Accidental Death of an Anarchist -- Yale Repertory Theatre -- Thru Dec. 21 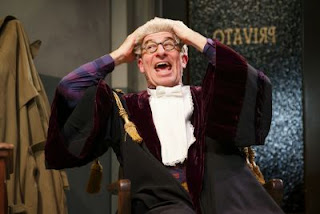 In 1969, a bank in , was bombed. The police blamed anarchists. An anarchist was duly arrested and, after three days of interrogation at a police station, the suspect jumped, or was pushed, out of a fourth-story window. Convoluted cover-ups ensued, became enflamed, and in response, Nobel prize-winner Dario Fo wrote the farcical “Accidental Death of an Anarchist,” intentionally pouring oil on the fire that was in the 70s.

So, why read the Yale Repertory Theatre’s program for its current production of Fo’s effort? Well, the problem with this production was apparently sensed by those involved, for we have this comment: “Although we are not generally steeped in the Italian politics of the early 1970s, it is not a stretch for us to appreciate Fo’s barbed and pointed jokes.” Well, I beg to differ. It is a stretch, and even with Gavin Richards somewhat heavy-handed adaptation and update of Gillian Hanna’s translation, this is theater that cries out for its lost context.

I’m as liberal as the next reader of “In These Times,” but that doesn’t mean I will immediately give knee-jerk applause to a play that seeks to bash the conservative opposition with mace and war hammer. This is, if you will, an exercise in what might be called self-satisfied theater, and director Christopher Bayes seems to think that his audience will, by and large, be composed of those of a marked liberal bent predisposed to nod (and sometimes applaud) at what, at times, seems little more than left-wing rant. 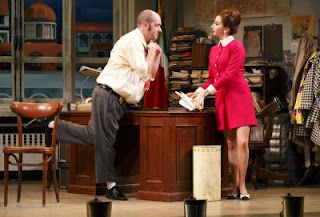 The setting of the play is the aforementioned police headquarters circa 1970, where several officers have gathered to interrogate the Maniac (Steven Epp). It’s an interesting collection of officers: Bertozzo (Jesse J. Perez), a Hispanic, Constable (Eugene Ma), an Oriental, and Pissani (Allen Gilmore), a Black man, soon to be joined by the Superintendent (Liam Craig), a blustering Caucasian, and a crusading journalist, Felletti (Molly Bernard) – the casting allows that fanaticism and neo-Facist tendencies know no ethnic boundaries. It also sets the stage for the characters to comment on just about every liberal whipping boy imaginable, from sexism and political corruption to police brutality, the more edacious aspects of capitalism and the Bush-Cheney non-existent WMDs, all in a wink-wink, nudge-nudge manner that takes on the aspect of preaching to the choir, no more so than in the Maniac’s final, bromidic soliloquy which ends with the challenge: “What are you going to do?” An appropriate response might be: “Yawn?” The whole effort comes off as a SNL skit with absurdist overtones. 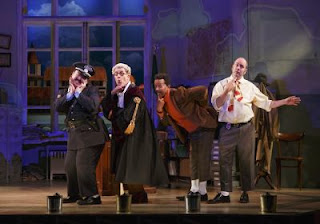 Bayes, who directed the Rep’s outstanding production of “The Servant of Two Masters,” (what an opening scene!), as well as “A Doctor in Spite of Himself,” once again brings aspects of Commedia Del Arte to his staging of “Anarchist,” but this time it rings just a bit hollow. The characters’ antics and occasional breaking out into song and dance feel forced, and although there are moments when the silliness, taken at face value, is entertaining, it somehow seems disconnected from the true spirit of a play meant to be bitingly sarcastic.

Fo rewrote his play several times so that it would be au courant, but there was always the need to shine a light on the reality of what was going on in at the time. Bereft of that context, Richards’ adaptation seems to be mere grist for conversational talking points at a soigné cocktail party, a drop-a-phrase event that allows all to nod their heads in acknowledgement of how horrid the times have become and how crude and boorish is the opposition as another canapé is consumed.