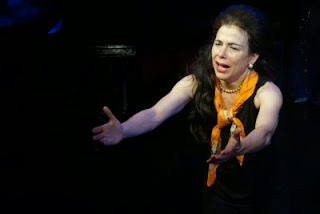 Irene Glezos as Maria Callas. All photos by Joe Landry


Do you want to be mesmerized for two-plus hours? Do you wish to forget who you are for a while and actually believe you are an aspiring opera singer eager to learn about the profession from one of the great divas? Would you like to see what might arguably be the best performance by an actress in this theater season?
Well, if you answered “Yes” to any of these questions, get yourself down to MTC Mainstage, that intimate theater in that is currently presenting Terrence McNally’s “Master Class.” You won’t be disappointed. It’s riveting, engaging, delightful theater, and if you have any tweens or teens in the house considering a career on the stage bring them along. If they are attentive they will learn more about the craft in these two hours than in a semester at the Actors Studio.
What’s “Master Class” about? It’s about Maria Callas, born Maria Kalogeropoulos in on Dec. 3, 1923, a weight-challenged, awkward child who, with guts and determinations…and a whole lot of suffering…became one of the greatest opera divas of the 20th century…but at a cost, always at a cost. Her career was meteoric, and as with all meteors, faded in a blaze of glory, smoke and fire. Her voice having given out, Callas agreed to teach a series of master classes at Julliard in 1971-72, 23 two-hour sessions in which she worked with 25 students. The sessions were recorded, and it is these recordings that playwright McNally used as the basis for writing his deep-sea dive into the soul of a complex, conflicted, supremely talented woman whose death in 1977 remains shrouded in mystery.
Bringing this larger-then-life woman to life is a challenge, but MTC has been fortunate enough to cast Irene Glezos in the role, and she is…well, spectacular. From the moment she walks onto the stage clutching her handbag she owns the audience, and she never lets go. Given the size of MTC – there may be 40 seats at most – the actress has free rein to work the audience, which she does. Hence, you are quickly drawn into the world of the operatic master class, you simply can’t help yourself – Glezos/Callas won’t allow you to. She doesn’t simply demand attention, she commands it.
For the aforementioned tweens and teens with thespian dreams, they would do well to watch how Glezos, under the insightful, sensitive direction of MTC’s executive artistic director Kevin Connors, uses body language – in all of its nuances – to create Callas. Watch her hands and fingers, watch her shoulders, watch how she turns her head – it’s a study in how humans communicated before humans spoke words.
This master class has obviously drawn students, and there are three of them who, over the evening, will be placed stage center to squirm under Callas’s acerbic scrutiny, all accompanied by Manny (Kevin B. Winebold), a sympathetic pianist who is, himself, in awe of Callas. MTC has cast three excellent actors to play off of and feed into Callas’s need to always hear the applause as, at the same time, she strenuously demands that there be no acclamations. After all, the class is not about her when, of course, it’s all about her. 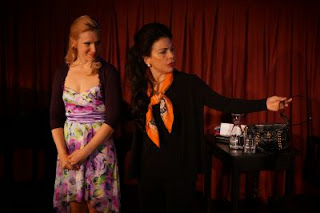 First to appear and undergo the Callas scalpel is Sophie (Charlotte Munson), an eager soprano inappropriately dressed who is immediately overwhelmed by Callas’s presence. She soon becomes nonplussed as Callas challenges her commitment to her art. She begins to sing but is only allowed one syllable before Callas is offering what, in the diva’s mind, is constructive criticism. 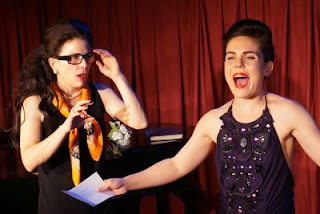 Sophie is followed by a second soprano, a steely-eyed Sharon (Emma Rosenthal) who appears, initially, to be up to the task of withstanding the Callas treatment. However, she soon cracks, failing to make an entrance. Rather, we learn later, she has rushed to the bathroom where she proceeds to vomit. She will return, however, and will create, with Callas, one of the most moving scenes in the show as the diva elicits from her a performance she did not think she was capable of giving. 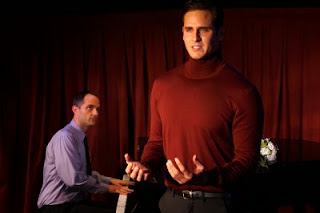 Kevin B. Winebold and Andrew Ragone

The final student is Tony (Andrew Ragone), a tall, handsome tenor who refuses to cave in to the diva’s demands. She suggests he leave but he stands his ground and, under the diva’s guidance, also learns what he is truly capable of.
The evening consists of Callas’s interaction with these three students, her off-hand comments to the audience (addressing the audience members as if they too are students) about her life and her art, and two extended flashbacks that come near the end of both acts. If I have any problems with this production, or with the play itself, it is with these flashbacks, for though Glezos handles them with skill and aplomb (shifting easily from the Callas character to a crude, garrulous, larger-than-life Aristotle Onassis, to her needful first husband, a man much older than she) they seem to go on for just a bit too long, their length diminishing their power and impact.
That quibble aside, “Master Class” is strong, compelling theater made more so by the fact that, given the size of the venue, Glezos is often mere inches away from the audience members sitting in the first row. The effect is palpable, for as she mesmerizes them she also makes them squirm just as bit, as if they are recalcitrant schoolchildren being taken to task by a stern teacher. It is, all in all, a bravura performance that should not be missed.