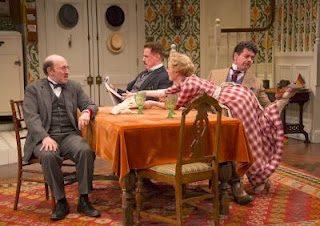 
There is farce, and then there is farce! The Westport Country Playhouse is currently offering a farce in the form of “Room Service,” while is boarding “The Underpants,” a farce under the very capable direction of the theaters’ artistic director Gordon Edelstein. Whereas the effort often fails to engage, for numerous reasons, ’s offering both delights and intrigues.

Adapted from a 1911 Carl Sternheim play by Steve Martin (yes, that Steve Martin), the play’s premise is a simple one: what would happen to a middle-class couple living in Dusseldorf, Germany, circa 1910, if the wife, Frau Louise Maske (Jenny Leona) just happened to unintentionally drop her drawers (caused by the break of a single string) while watching a parade in honor of, and featuring, the king? Well, Frau Maske’s husband, Theo (the delightfully excitable Jeff McCarthy), a mid-level bureaucrat, is beside himself: his wife’s underpants dropped for all the world, including the Kaiser, to see! What will happen to his career? What will happen to his good name? Oh, the shame of it all. (“In broad daylight, on a city street, you are standing out in public and your underpants fall down. I can’t believe this happened to me!”) 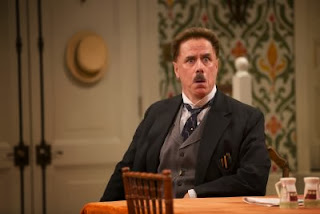 Well, the incident does draw attention, but not of the type Herr Maske (yes, read “mask,” as in we weave a mask so as to present our ‘best’ selves to society) is fearful of. You see, the Maske’s have a room to rent, and soon a turn-of-the-century lounge-lizard named Frank Versati (a wonderfully louche Burke Moses) knocks on the Maske’s door seeking shelter and, as soon as Theo absents himself, proceeds to protest his somewhat oleaginous love for Frau Maske. She is shocked, but also intrigued, and her interest is egged on by the Maske’s upstairs, eavesdropping neighbor Gertrude (a droll ), an earthy sort who is eager for Louise to experience the pleasures of illicit sex. 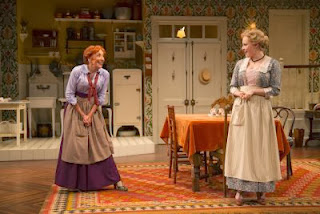 Frau Maske’s wardrobe malfunction has also drawn the attention of Benjamin Cohen (Steve Routman), a man equally interested in the room to let who, when Herr Maske questions his name, swears that it is spelt with a “K” (thus introducing a darker side to the proceedings, for it will be a scant three decades before the issue of Cohen’s religion will take on horrific meaning). Cohen immediately sizes up the situation vis-à-vis Louise and Versati and decides he must stay to defend her honor (and also, in his own mouse-like way, nibble at it). 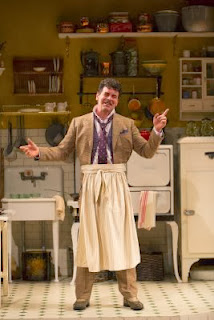 Thus the stage is set for some classic farce, with the husband all but oblivious to the intentions of Versati and Cohen – Herr Maske is so wrapped up in ‘self’ and so sure of his dominant position in the husband-wife relationship that the dual sieges on his wife’s ‘honor’ go all but unnoticed by him.

Louise flutters under Versati’s attention and, in a truly comic scene, finally falls, only to have the poet-manqué, at his moment of triumph, rush off to compose an ode. This follows an equally hilarious scene in which Louise administers a sleeping potion to Herr Cohen to clear the way for her tryst with Versati. Herr Cohen’s wobbly-legged exit up some stairs and through a door (yes there are a sufficient number of doors to allow for the usual farcical door-slamming) is priceless – sheer physical comedy in the classic tradition of all the great silent film comics – Chaplin could not have done it better. 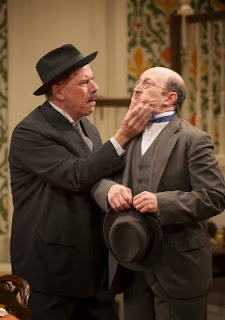 Adding to the controlled chaos is another man in search of a room, one Herr Klinglehoff (George Bartenieff), a straight-laced, elderly gentleman unaware of the ‘underwear’ incident, who merely wishes sedate shelter but will be shocked by the eventual goings-on under the Maske’s roof (including the presentation by Gertrude to Louise of underwear sewn in the colors of the German flag).

What seemed missing in the Playhouse’s production of “Room Service” – the actors truly becoming their characters rather than just representing them – is in “The Underpants” fully realized. There really isn’t a single false moment in the evening. McCarthy is wonderful as the blustering, self-important Theo, a husband who abhors change and is proud of the fact that he is, in fact, nothing more than a clerk, yet, when at home, the Kaiser of his castle. 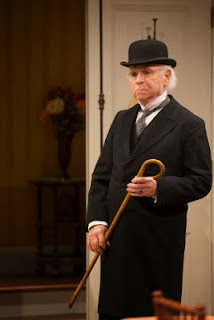 Leona is lovely, lithe and lively as Louise, the hausfrau who begins to sense that there might be more to life than her drab, pompous husband has to offer, and as Versati, the arch-womanizer, Moses simply oozes false charm from every pore at his first entrance…his evocative body language drew a laugh from the audience on opening night before his character spoke a word.

, as Gertrude, gives an arch, highly humorous performance as a lady of the world who aches for the male attention being lavished on Louise, Routman is at once both timid and bold as Louise’s frustrated second suitor, and Bartenieff’s Klinglehoff is sufficiently bemused and confused, adding a nice accent to the rather riotous goings-on. 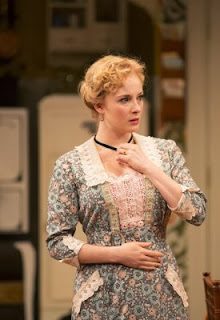 Edelstein directs with a light, deft hand that maintains the play’s playfulness throughout (albeit with the aforementioned dark undercurrent), right up to the curtain call when (similar to the close of “Room Service”) the cast reappears and does a conga-line dance, albeit all in their underwear.

Performed without an intermission, “The Underpants,” which is being presented in association with Hartford Stage, is frothy frivolity at its best, and a great way for to kick off its 49th season.