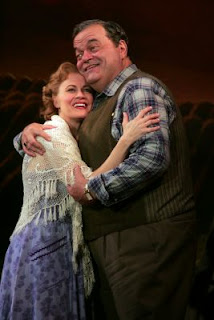 “My Heart is So Full of You”
Mamie Parris and Bill Nolte in The Most Happy Fella.
Photo by Diane Sobolewski

Goodspeed Opera House, that venerable institution currently celebrating its 50th anniversary, has chosen to end its season with a production of Frank Loesser’s “The Most Happy Fella,” the 1956 musical with operatic overtones about an Italian grape grower plying his trade in Napa Valley circa 1927 who falls in love with a waitress. Perhaps ranked in the second tier of great American musicals, “Happy Fella” may well be headed for another Broadway revival if the powers that be wander out to East Haddam and take in this lush, vibrant, heartfelt production directed by the sure-handed Rob Ruggiero (who seems to have become the House’s go-to guy of late) that pleases on just about every level.

Perhaps we should just cut to the chase and say that as Tony Esposito, the owner of the vineyard, Bill Nolte (a Broadway vet) dominates the stage. With features that are a cross between those of Ernest Borgnine and Deputy Dawg, Nolte would seem to be the last candidate to be the leading man in a romantic musical, but he is also blessed with a beautiful voice and acting skills that allow him to express a vast range of emotions, everything from self-doubt (perhaps even self-abasement – his lips visibly quiver and flutter as he exhales in exasperation at his failings) and vengeful rage to benign paternalism and joyous love. As good as this cast is (and Goodspeed can never [well, hardly ever] be faulted for casting), Nolte soars above them all, giving us a Tony who is a lovely blend of curmudgeonly tenderness, a yearning yet doubtful romantic you relate to so much that, near the end of the second act when his heart is (almost) broken you want to take him into your arms and whisper, “Hush, now, it’ll be all right.”

The object of Tony’s affection is a waitress at the Golden Gate diner in , a lady he dubs “Rosabella” (Mamie Parris). Dining there one night, Tony leaves her a note and an amethyst stick-pin as a tip. Rosabella, along with her co-worker Cleo (Natalie Hill), are tired of slinging hash and fending off the gropings of the diner’s owner (James Zannelli), and Rosabella is moved by the heartfelt if ungrammatical note. Soon a correspondence develops between Tony and Rosabella which leads to an exchange of pictures. She sends him hers but, in one of those self-abnegating moments, Tony realizes that his looks would not entice a porcupine, so he has a picture taken of Joe (an impressive Doug Carpenter), his foreman, who is, if nothing else, a lot more photogenic, and sends this along with a marriage proposal, much to the consternation of his sister, Marie (Ann Arvia), who mothers him. Rosabella agrees to the proposal and takes a train to . Tony is to pick her up, but on the drive to the station he is so nervous he has an accident. Thus, Rosabella is delivered to the vineyard by a postman (John Payonk) and Joe is the first person she meets. Obviously, complications ensue, including a passionate one-night stand between Rosabella and Joe that will drive the musical’s climax.

As already noted, there is an operatic tinge to the musical. What in most musicals of the era would have been delivered as dialogue is often handled as recitative (extremely innovative in ’56 but now an accepted Broadway form given “Les Miserables,” “Evita” and “Matilda”). There are, admittedly, moments that drag a bit, but you quickly forget them as Cleo bumps into Herman (Kevin Vortmann) and discovers that they are both from “Big D” (i.e., Dallas), and the focal love duet, “My Heart is so Full of You,” sung by Tony and Rosabella, cannot help but make the heart beat a little faster and the eyes to tear up a bit. It is right up there with the preeminent love duets and perhaps gets the edge because of the age difference between those singing it…in other words, it goes to the essence of love, which is, of course blind (and often deaf, dumb and oblivious to society’s norms and strictures).

When I saw Goodspeed’s press release dealing with its 2013 season I wondered why the opera house would want to close out with Loesser’s musical. I wonder no more. What we have here is a joyful celebration of love conquering all (age, looks and human foibles and failures). It’s a nice message to end the season with. Is there now a fan of this musical? Yes, “That’sa me!”