Spiders in the Mind 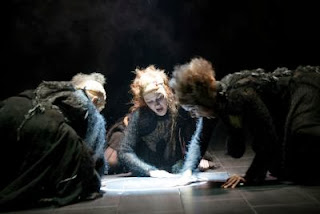 If you are a frequent attendee at Hartford Stage you will have recently seen “La Dispute,” a frothy, light exercise in Age of Enlightenment folderol. The set for this show is basically a cotton-candy forest with nary a shadow in sight.

Return to the Stage several days later and you are plunged into darkness, deep into darkness…and eventual insanity…for Macbeth has listened to the weird sisters and taken the advice of his avaricious wife, and thus has slain the king. What follows is one of Shakespeare’s darkest plays, and director Darko Tresnjak (who also designed the protean set), along with lighting designer Matthew Richards and sound designer Jane Shaw, simply do not allow the audience to escape the physical, mental and psychological horror of Macbeth’s actions. You may have come away from “La Dispute” saying, “Well, so what?” but I challenge you to come away from this production of “Macbeth” without being moved…and troubled, for the cast and creative team have conjured up a nightmare that you will not soon forget.

From the moment Macbeth (Matthew Rauch) stumbles upon the weird sisters (Kalisa Brewster, Mahira Kakkar and Kate MacCluggage), the soldier triumphantly fresh from the battlefield, you know that he is doomed, for in the darkness, with mist rising, his future is foretold – that he will one day be king -- but the sisters do not mention the heavy price that many, including Macbeth himself and his wife, Lady Macbeth (Kate Forbes) will have to pay before all is over.

What follows on a stage but barely lit and sparsely furnished (save for a series of rectangular panes that first appear as glowing cathedral windows and then, late in the play, are central to Birnam Woods marching on Dunsinane -- hence fulfilling the sisters’ prophecy -- is, at best, grim, for there is murder most foul and insanity. For those who have seen both plays being performed in repertory, it is interesting to ponder the shift the cast must make when it moves from the cotton-candy world of “La Dispute” to the depths of dread and despair that Tresnjak and company have conjured for the Scottish Play.

Given that this is basically a single-set production, it is also interesting to see how Tresnjak stages certain scenes that would normally demand a change of set. Perhaps the most compelling alteration from standard productions is the banquet scene late in the first act (yes, normally there are five acts, but things have been compressed and condensed) in which the ghost of the recently murdered Banquo (Grant Goodman) appears to haunt Macbeth. Most productions will show you the banquet, with the ghost wandering the tables, but in this production the banquet occurs up-stage and unseen behind the dark panels that hold the aforementioned “panes.” Hence the ghost’s appearance and the effect on Macbeth are first heard before seen. In panic, Macbeth rushes from the banquet through a center-stage door to appear on stage, followed by the ghost, who is immediately lit in blood-red light. It’s a stunning and unexpected entrance and effect.

Tresnjak has not shied away from the reality of murder most foul and thus the production may not be fit fodder for the younger set – it’s one thing to see someone blown away on a video game and quite another (given the visceral power of live theater) to see murder most gruesome (both of adults and children) and suicide (Forbes is especially fine in the “damned spot” scene) enacted before your very eyes. Tresnjak has opted to emphasize the dark nature of this play (both literally and figuratively), and the result is, if nothing else, disturbing…and hence, good theater.

If you came away from “La Dispute” feeling a bit sticky – just too much froth weakly anchored on specious, beside-the-point intellectual bonbons -- then a sure way to cleanse the intellect and sear the soul is to settle in for the shriving experience of “Macbeth.” Trust me, you will leave the theater shaken, and isn’t that what theater is all about?