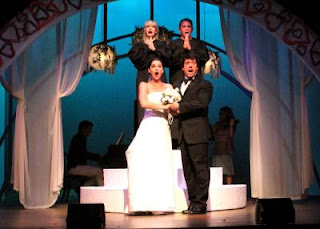 He loves me, he loves me not.
Can’t live with her, can’t live without her.
And so it goes in the eternal square dance called love. There has been confusion and misunderstandings ever since Eve proffered the apple to Adam, and though the dosey-doeing has often been the cause of a lot of angst and anxiety, it has also generated, if looked at in the proper light, a lot of laughter. Hence “I Love, You’re Perfect, Now Change,” a delightful take on the never-ending search for true love and happiness that recently opened at the Ivoryton Playhouse under the discerning direction of Christopher Sutton.
“I Love You” is basically a series of musical sketches that begins with a first tentative date and ends with, well, a first tentative date. Along the way there’s a lot of Mars/Venus humor interspersed with some bittersweet moments that capture how easily we can be wounded if we are not careful. The characters listed in the program have no names, just “Man One,” “Woman One,” etc., emphasizing the universality of the occurrences depicted, but the flesh and blood men and women up on the stage who struggle with the dynamics of love are, in almost every scene, engaging and delightful, for Sutton and Ivoryton’s executive/artistic director Jacqueline Hubbard have gathered together four extremely talented actors -- Christopher Sutton, Michael Brian Dunn, Holly Holcomb and Sheila E. Coyle -- who are more than capable of creating multiple personas.
There are nudge-nudge scenes aplenty in this pastiche of romantic pitfalls and pratfalls created by Joe DiPietro and Jimmy Roberts, covering everything from the oh-so-busy young urbanites who don’t have time to connect (“We Had it All”) and thus go through the ultimate speed-date, and the awkwardness of that first date between self-proclaimed “losers” (“A Stud and a Babe”), to the inevitable “cooling off” after marriage (“Marriage Tango”) and eternal urge to be with someone, to share a life together (“I Can Live With That”).
Oddly enough, although almost every scene contains a song, it is the dramatic moments that stay with you long after you’ve left the theater, two of which seem to stand out. The first is “The Very First Dating Video of Rose Ritz,” which features Holcomb in what can only be described as a bravura performance as a divorcee who has decided to get back into the game via a dating service that allows participants to essentially showcase themselves on tape. A large monitor is rolled onto the stage and Holcombe sits on a stool facing a camera, her back to the audience. Her image appears on the screen and Rose begins to “sell” herself, but the pitch soon devolves into a bitter summary of the pain her divorce has caused. It’s strong stuff, so much so that you can’t take your eyes off that monitor as Holcombe’s character bares her soul.
The second memorable moment is the penultimate scene – “Funerals are for Dating” – which contains the “I Can Live with That” song. The setting is a funeral parlor where an elderly woman, portrayed by Coyle, and man, Dunn, meet by chance. Neither knows the deceased – she is there simply to accompany a friend; he is there for another viewing which has yet to begin and has decided to take a load off his feet. It turns out that he has seen the lady before at other funerals and uses that as an overture. She responds tentatively, but soon they are in conversation as embers long thought extinguished begin to glow again. It is a touching, gentle conclusion to a very enjoyable evening and a reminder that age is no barrier to falling in love. We will seek companionship until we take our final breath – that’s simply how we are wired.