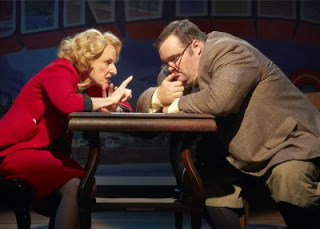 Dale Hodges and Raymond McAnally. All photos by Larry Nagler.


Watching “Mrs. Mannerly,” Hartford TheaterWorks latest offering, is like riding in a very nice car that needs a tune-up. The one-act, two-actor (though there are multiple characters) play by Jeffrey Hatcher, directed by Ed Stern, rolls along smoothly enough until the engine (read “dialogue”) gives a cough, the vehicle shudders and the occupants (read “audience’) wonder whether or not they are going to get home safely. Well, they do, but the ride, in the end, though pleasant, is less than satisfactory, and a good slamming of the car door might be in order, for Hatcher lets us all off a couple of blocks away from where we want to be.

So, what’s this all about? Well, it’s Steubenville, Ohio, in the 60s, and 10-year-old Jeffrey (Raymond McAnally), a young lad socially and physically (but not intellectually) challenged, is enrolled in Mrs. Mannerly’s school of, well, manners, an almost mythical alembic that has, for over three decades, seen Steubenville’s awkward and ill-mannered youths pass through to reappear as polished, semi-precious gems. And what, or rather who, brings about this miraculous change? Well, Mrs. Mannerly (Dale Hodges), of course, with her 100-point graduation exam, an annual poise-and-charm presentation performed before the prim prima donnas of the local chapter of the DAR (killer audience!). Jeffrey, a failure at just about everything, is determined to be the first of Mrs. Mannerly’s students to score a perfect 100. 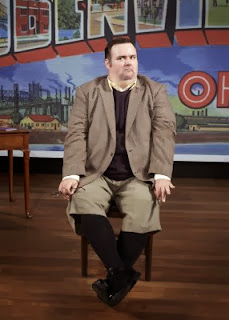 Ah, but Mrs. Mannerly’s school has fallen on hard times, for she now has only five students (all played delightfully by McAnally), none of whom are blessed with inherent charm. Besides Jeffrey, there’s Kim, a somewhat non-descript female (and the least realized of all the characters), Jamie, an aloof, oh-so-been-there-done-that young lady with a very “open” family, (McAnally shines as Jamie finally vents), Ralph, whose perpetually leaky nose he handles with an upward swipe of his hand (thus accumulating over the day a vast amount of, well, snot, which he leaves behind him as a snail trails slime), and Chucky, the class suck-up.

McAnally also gives us Patsy, a “Mannerly” grad, and daughter of a local Mafioso who, (somewhat incongruously, since Jeff is but 10 years old) comes on a bit strong with the socially-challenged lad in a hilarious scene in which McAnally, with just two pairs of glasses and a lot of writhing, gives us a sexual-awakening tryst that is a wonder to behold. 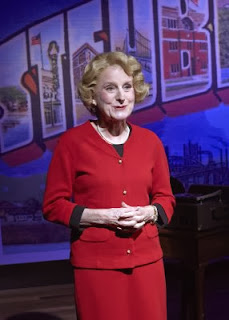 For various reasons, all of the students save Jeffrey depart Mrs. Mannerly’s class, leaving the boy screw-up as the only candidate for the final exam, but there’s a side-story, and it’s here that the somewhat autobiographical play falters (actually, it falters elsewhere, but of that later). You see, Mrs. Mannerly, aka Helen Anderson Kirk, has a “past”, a la Blanche DuBois in “A Streetcar Named Desire,” that involves and a play she was supposedly cast in. The mere mention of “” makes Mrs. Mannerly double over in pain and, compliments of Mr. Krasky (a drama teacher also played by McAnally who attends sad, annual conventions at which ways of staging “Our Town” more economically are discussed), ‘the goods” on Mrs. Mannerly, in the form of documents enclosed in a manila envelope, are delivered into Jeffrey’s hands.

Reverting for a moment to another medium, the great suspense director Alfred Hitchcock once commented that if you a show a ticking bomb, and then show it again, somewhere along the way it damn well better go off. In “Mrs. Mannerly,” the bomb never detonates, leaving the audience (at least one of its members) a bit frustrated. Turns out the envelope was, to use another Hitchcock term, a MacGuffin. What the hell happened in ?

There are larger problems, however, and they go back to that car in need of a tune-up, for the play moves along smartly, with a lot of black-outs, flashbacks, wit and humorous allusions (at least if you grew up in the 50s and 60s) until it stutters and stalls with some dialogue that simply doesn’t work, falls flat. To mix a metaphor, you can feel the air going out of the balloon and it takes a while for the pressure to build again, only to have more dialogue fall flat. Thus, what should have been a steadily increasing arc of entertainment, if plotted on the X-Y coordinate plane, would actually look more like an EKG of someone with a severe heart problem.

The stutters and stalls notwithstanding, there’s still a lot to enjoy in this production, which has its heart in the right place. The evening, which is enhanced by John Lasiter’s lighting design – a lot of blackouts, follow spots and specials, as well as some nifty special effects (blood red suffuses the stage when Mrs. Mannerly is shot – yes, shot!) -- is a light-hearted take on a world now only a memory, a world where manners still mattered. Several scenes stand out: the aforementioned tryst between Jeffrey and “Patsy,” and the scene where Jeffrey walks Mrs. Mannerly home only to end up in a bar (her apartment is on the second floor). Hodges’ take on the prim and proper lady getting progressively soused is a delight, although one would have wished Hatcher had used this moment for a little more “in vino veritas” in the dialogue. Maybe then we would have known, if only by innuendo, what was in that manila envelope.