A Farce That Falls Flat 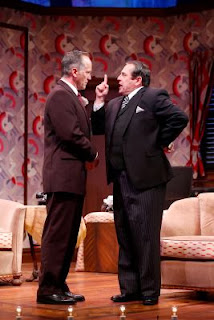 Watching a play is like going on a first date – you don’t know what to expect, you’re hoping for the best and dreading the worst and, of course, the evening is influenced by first impressions, those first minutes when you make judgments, perhaps wrong, but…they flavor the rest of the evening. If the guy has some spinach nested between his teeth, well, even if the spinach disappears (or dissolves), your mind’s eye keeps going back to the offensive piece of greenery, and there’s nothing he can do to erase the initial unease. Such is the case with “Room Service,” which recently opened at the Westport Country Playhouse, a 1930’s farce by John Murray and Allen Boretz that starts ever so slowly, eventually takes flight, yet is burdened by that spinach.

The set-up is we have a producer, Gordon Miller (Ben Steinfeld) who is dead broke. He’s been rehearsing a play for weeks yet is unable to pay his actors. Since it’s the 30’s, the actors are willing to hang in there for room and board, which means they are all living  in a second-rate hotel in Manhattan and charging everything to Miller’s account. The bill comes due, Miller can’t pay, so he has to find ways to forestall the inevitable until the lights finally go up and the play is a success, which means he has to find a backer. 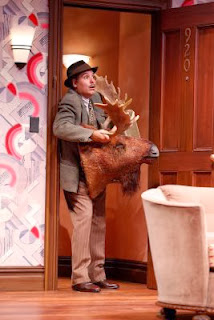 Well, it takes most of the first act of this three-act play to set up the premise, and things drag as exposition is dealt with. By the time it comes for door slamming (it is a farce, after all) and controlled insanity, including a farcical faked suicide, it all seems somehow beside the point. Some in the audience began to laugh, others just yawned.

Farce, if it is to work well, relies on timing and chemistry, and neither is evident in this production. Director Mark Lamos, the Playhouse’s artistic director, has his head in the right place, for there are moments of controlled chaos and delightful delirium, but the heart just doesn’t seem to be there, but perhaps it isn’t entirely his fault, for the set he has been given to work with, designed by John Arnone, is extremely restrictive. The full stage is not taken advantage of, and the set, which consists of a cheesy hotel room, is dominated by a sofa, two beds and a bulky chair, all positioned so that the blocking (how and where the actors move) is restricted, forcing much of the action down-stage. Thus, many scenes are played with the actors basically in a row, something not conducive to interaction, and line-of-sight has been given little consideration. If you are not sitting in the center orchestra section then you see a skewed version of the play. 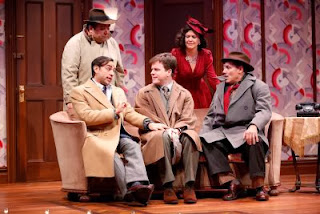 And then there is the rhythm of the lines delivered by many of the actors. It entails basically searching for a laugh, which means you get: beat – beat – beat – BEAT!! Emphasis on the punch word. And if that is not enough to make the point, Lamos has his actors pause and give a knowing look out at the audience when delivering a line pregnant with double-entendre (“He can’t keep it up for two hours.”) Racy, perhaps, in the 1930’s, but now a bit banal...and, yes, we get it.

The play’s curtain call has a lot of frivolity to it…characters start to dance, are playful…would that that sense of joyful mania had been infused from the beginning. As it is., “Room Service” is a farce wannabe. You’re waiting for the moment when the play lifts off and flies but, alas, it never does, and a lot of good work in the second and third acts is discounted because of the first act, and the spinach in the teeth.

“Room Service” runs through Oct 27. For tickets or more information call 203-227-4177 or go to www.westportplayhouse.org
Posted by Geary Danihy at 5:50 PM