Not Wisely, but Too Well 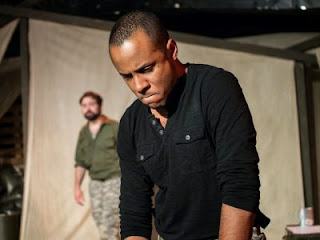 Of Shakespeare’s tragedies, perhaps the two that speak most closely to the modern heart, mind and soul are “Romeo and Juliet” and “Othello,” for we can all remember a time when the world seemed fresh and new, we were immortal and in love, a first love, generating a feeling so intense that food and drink seemed mere inconveniences, the time spent away from the beloved appeared to stretch out to eternity and we swore to any and all who would listen that life itself would hold no meaning if we could not be with the one we adored (time, of course, proved most of us wrong on that score).

Then there is “Othello,” Playhouse on Park’s first production of this its fifth season. Which one of us has not, at one time or another, if only for a moment, loved not wisely, but too well, and can any of us say that we have never, at least once, felt the fangs of jealousy plunge into our hearts, releasing a poison that clouded our minds and enflamed our emotions?

Shakespeare’s plays are, if nothing else, malleable, especially his comedies and tragedies, for they deal with verities that can don the garb of different cultures and centuries and still shine forth. Hence, we can have a “Macbeth” set in or or on Wall Street; we can see Romeo dressed as a 1950s gang member, Julius Caesar wearing the uniform of an American general circa 1945, and Othello? Well, how about battle dress appropriate for Desert Storm or Operation Iraqi Freedom?

Although in the program notes director Sasha Bratt denies that his production is set in either Iraq or Afghanistan, what we see on stage belies the denial, for from the opening scene the production evokes the last 10 torturous years: we have Iago (Tom Coiner) standing on a box, face and upper body bruised and bloodied, arms painfully stretched above his head, hands manacled to chains that are attached to a metal ring. Four black-garbed interrogators appear on the spare set, Iago is released only to be water-boarded. What’s the audience to think? Although references to have been kept in the dialogue, the desert dominates: the wind, the sand, the heat…the sadism.

Does this work? Well, yes and no. The men, save for Roderigo (Austin Seay) and several of the Venetian lords, are all soldiers, so the Iraq/Afghanistan trope seems reasonable, but the ladies? Out there in the field, in a combat zone, with Desdemona (Celine Held) in a cocktail dress and heels? Bianca (Emily Kron) looking like she was plucked from the Studio 54 dance floor? Emilia, in what looks like ward-sister garb? That’s asking the audience for a hell of a lot of suspension of disbelief. 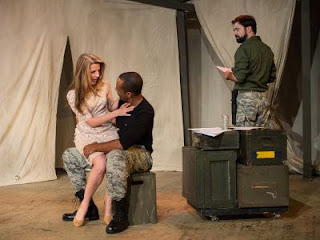 Okay, so suspend the disbelief and what we have is a very strong, dark production of the play, central to which, obviously, are Iago and the Moor, Othello (R.J. Foster), two men who, each in his own way, are doomed by the tragic flaw of jealousy. Going back to Bratt’s program notes, the director writes that he wanted to emphasize two things: Iago’s youth (28) and thus what happens to young men caught up in the horrors of an on-going war, and the assumption that, up until the fangs plunged deep into his heart, Iago was, in fact, honest and true. Well, Coiner gives us a very interesting and compelling Iago, but the play as written simply doesn’t dwell on the man’s youth and, though there are numerous references to his honesty and faith in the play (every single one of them ironic), his role is written as that of a villain – there’s just no way to get around it. Iago’s been passed over for promotion, believes that Othello has slept with his wife, and therefore plots the general’s downfall from the opening scene (if you overlook the torture overture).

Coiner, an accomplished actor, is blessed with eyes that could have their own Actors Equity card, for as Iago plots and connives, the actor’s eyes convey the emotions that are driving the scheming and, as well, the perverse delight he takes in manipulating not only Roderigo and Othello, but Othello’s lieutenant, Cassio (Aidan Eastwood-Paticchio). It’s the eyes that draw the audience into this character and, in an odd way, generate a certain amount of sympathy for him.

Iago’s primary target is, of course, Othello, and Foster is the essence of the battle-hardened man who has finally found a woman who might just ease the pain of the carnage he has seen. As is appropriate, the actor has a commanding presence on stage, and in quieter moments he delivers his lines with aplomb. Unfortunately, the same cannot be said when the action speeds up and Othello becomes excited, for Foster seems to stitch the words together so that they sound like a stream of iambs. There are moments when you simply can’t understand what he is saying, and it has nothing to do with the iambic pentameter.

The lamb led to the slaughter in this tragedy is Desdemona, and Held gives a delicate, multi-layered performance as this much put-upon lady. Given the costumes she is asked to wear, she has much to visually overcome to get the audience to believe in her, but this she accomplishes, especially in the strangulation scene (about which I have always wondered, since modern productions feel no compunction about cutting and pasting Shakespeare’s plays, why Desdemona’s miraculous coming back to life to deliver her final words is not excised – she’s been strangled! It’s not like she’s been knifed or shot and thus gets those final farewell moments before collapsing. People who have been strangled normally don’t get the opportunity to give perorations).

All in all, this production of “Othello” is both interesting and, at times, compelling theater. Set designer Christopher Hoyt’s essentially minimalist set places the actors…and the action…front and center – with the lighting, by Aaron Hochheiser, emphasizing the various emotional levels of the play. There’s no credit in the program for fight coordinator, but given the numerous set-tos in the play, whoever schooled the actors and choreographed the violence deserves a great deal of credit.