“Sing For Your Shakespeare” Sets a Rich Table

"Sing For Your Shakespeare" -- Westport Country Playhouse -- Extended thru June 28 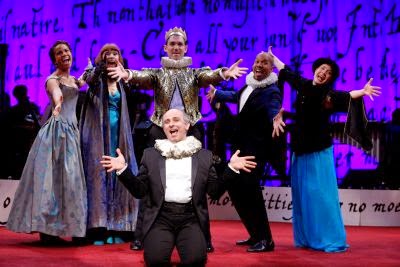 Westport Country Playhosue has a hit, a palpable hit, on its hands in the form of “Sing For Your Shakespeare,” a musical review conceived by Wayne Barker, Mark Lamos and Deborah Grace Winer, deftly directed by Lamos, the Playhouse’s artistic director, and choreographed by Dan Knechtges. There’s nary a dull or false moment in the entire 90 minutes in this tribute to the Bard and the many composers and lyricists who have, over the years, drawn from the Folio and the sonnets to create some memorable songs and musicals. Those memories come alive again, so much so that they make you want to see the original shows all over again.

The problem with most revues is that the premise is weak or lacking – a tribute to a composer or artist that contains a bit of biography as the mortar that holds the shaky structure together. Some directors shy away from revues because there’s little or no “story” to tell. As one director put it, you’re really at the mercy of the actors – the show rises and falls on their talent and ability to sell the songs and keep the audience interested. Well, such is not the case with “Sing,” for though it is a tribute it’s a multi-faceted one that draws on Shakespeare’s plays to provide settings for the 23 songs that comprise the evening…and the talent? Well, any director would sleep well at night knowing that his or her show is in the hands of the six extremely accomplished actors that comprise the cast. 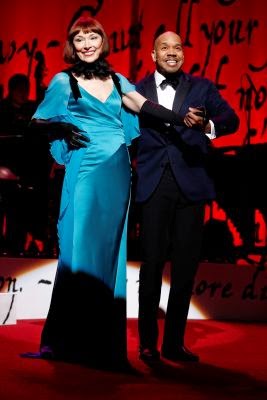 These six – Karen Akers, Britney Coleman, Darius de Haas, Stephen DeRosa, Constantine Germanacos and Laurie Wells – are called upon to sing, dance and act – often at the same time! (apologies to Eric Idle) And they do so with grace, style and a verve that keeps the evening “up” throughout the entire show. In fact, there are so many stellar moments that, as you leave the theater, you wish what you had just seen was a film that you could rent and immediately watch again…and again.

The vocal quality of the actors is on display right from the start as they gather on the single set designed by Riccardo Hernandez, which consists of two levels: a clear downstage area for the actors and a platform upstage for the seven outstanding musicians. Behind the musicians is a scrim with the Bard’s words flowing left to right, words that also appear on the proscenium’s arch. The evening opens with a madrigal – “Lover and His Lass” – and as you listen to the actors harmonize you sense that you won’t hear a false note the entire evening – and you don’t. 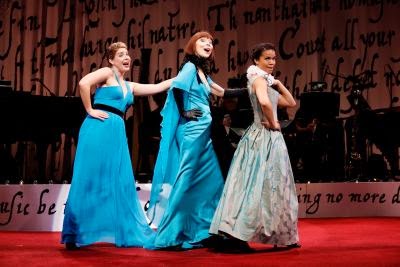 One of the things that makes the evening work so well is the framing of the songs, much of which consists of snippets or abbreviated scenes from Shakespeare’s writings. Early on, one of the most engaging moments is Germanacos’ recitation of Sonnet 40, followed by the sonnet set to music by Duke Ellington and Billy Strayhorn and sung with sass and style, and a great sense of the scat tradition, by Coleman.

There are also a lot of surprises. Did you know that Frank Loesser, he of “Guys and Dolls” fame, wrote a song for Betty Hutton to sing in the 1949 film “Red, Hot and Blue” that essentially summarizes, and satirizes, the plot of “Hamlet”? Well, he did, and it’s performed by the cast with great comic sense and a lot of body language. Then there’s a live-action historical sketch TV series that was called “Horrible Histories” from which the creative team has drawn the “Shakespeare Song,” written by Richie Webb and David Cohen, a skit that is basically Shakespeare going on a wordsmith ego trip – and DeRosa nails it. He actually looks like the Bard! 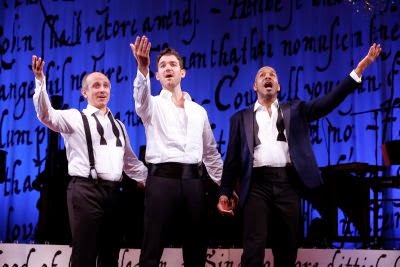 Then there are a lot of reminders, like the one that brings those of us of a certain age back to the time of “Hair,” and the memory that one of the numbers – “What a Piece of Work is Man” – was lifted from a Hamlet soliloquy and set to music – and de Haas and Germanacos do a fine job of doing the reminding.

Lamos stages the wooing scene from “The Taming of the Shrew,” nicely acted by Coleman and Germanacos, as an entry into several songs from Cole Porter’s “Kiss Me Kate,” and the songs – “Where is the Life That Late I Lived” and “It’s Too Darn Hot” – are staged to evoke the musicals themselves, helped along by some great lighting effects by Robert Wierzel. This is, in essence, what makes this revue stand out – there has been a great deal of effort, thought and talent put into creating these numbers to evoke emotions on several levels, not the least of which is memory (for those of us into musical theater), but the scenes are not simple re-enactments of the musical numbers as they first appeared in the parent musicals, they have been reconceived for the show, so you get the best of both worlds. 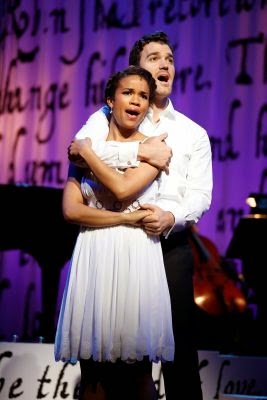 If you’re looking for an emotional wrap-up, then you need go no further than the last 10 or so minutes of the show, for after “Kiss Me Kate” there’s a segue into “West Side Story,” and Lamos, and the cast, and the orchestra, and lighting designer Wierzel, all work together to bring a clutch to your heart, first with “Maria,” beautifully and emotionally sung by Germanacos, and then the lovely duet, “Tonight,” sung by Germanacos and Coleman, to the penultimate number, “Somewhere,” sung by the entire cast. At this moment you might think the Mormon Tabernacle Choir is up there on stage, given the depth and complexity of the sound the six actors are able to create. I defy anyone not to be moved as you listen to the voices rise.

“Sing For Your Shakespeare” has been extended through June 28. For tickets or more information call 203-227-4177 or go to www.westportplayhouse.org.
Posted by Geary Danihy at 7:11 AM