“Spelling Bee” Gets an Amiable A 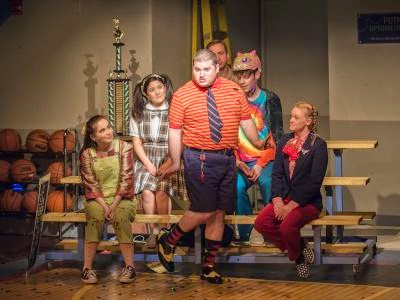 Go ahead, spell “syzygy.” Bet you can’t (of course you can, because you’re looking at it – but you get my point). Rona Lisa Peretti can, without peeking, and that won her top place lo those many years ago at the Third Annual Putnam County Spelling Bee. Fast-forward 22 years and there’s a new batch of eager, buzzing Bees ready to win the trophy in “The 25th Annual Putnam County Spelling Bee,” currently being hosted at Playhouse on Park in , with none other than Rona Lisa at the helm. Even if you are logophobic (look it up!), you can’t help but have a good time at this particular Bee, smartly directed and choreographed by Susan Haefner.

The musical is based on an improvisational play by Rebecca Feldman, which William Finn, who wrote the music and lyrics for “Spelling Bee,” saw and immediately sensed possibilities. “Spelling Bee” was work-shopped in 2004 and reached Off-Broadway in 2005, then opened on Broadway in the same year, garnering two Tonys.

The premise is simple – but has a twist. Six young, idiosyncratic contestants gather for the , each hoping to win and move on to the Nationals. The twist is that four audience members join the six (you can sign up for participation in the Bee in the lobby before the show) in the competition. The entire show is about the elimination, as one contestant after another goes down to defeat, along the way revealing aspects of their young lives (and the various pressures they are under) via song and dance. It is infectious. 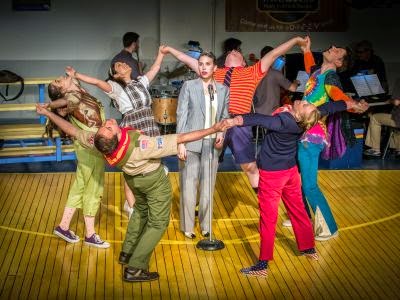 The contestants are essentially stereotypes: there’s the socially inept nerd, William Barfee (that’s “Bar-fey!”) (Steven Mooney), the Asian girl, Marcy Park (Maya Naff), who seeks perfection in all she does, and the weirdo goof-off, Leaf Coneybear (Kevin Barlowski), who makes his own clothes. Then there’s Logainne SchartzandGrubenierre (Hillary Ekwall), who’s two “fathers” have made her so uptight she might shatter at any moment, along with Chip Tolentino (Scott Scaffidi), a Boy Scout beset by puberty, and finally Olive Ostrovsky (Natalie Sannes), the sweet, girl-next-door type whose mother is currently in an ashram in India. The proceedings are overseen by Perretti (Emily Kron), assisted by vice-principal Douglas Panch (Norman Payne) and monitored by Mitch Mahoney (Norman Payne), an ex-con doing community service by providing comfort (and apple juice) to those eliminated. 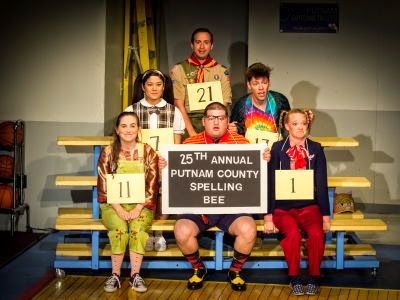 Finn and Rachel Sheinkin, who wrote the book, milk the stereotypes for all they are worth, and to great comic effect, often focusing in on mannerisms and personal tics that define the “types.” The cast is, from first to last, excellent – whether they are wandering through the audience prior to curtain, establishing “relationships” (Scaffidi will find his “mother” in the audience before the show starts), guiding the other (audience) contestants through the first act, or revealing their travails and insecurities via ballads and ensemble numbers – they please on any number of artistic levels while eliciting laughs and guffaws from the audience on a regular basis.

Part of the enjoyment comes from how the four audience “contestants” are handled. The script calls for them, one by one, to be eliminated by the end of the first act. How Newsome, who as Panch reads the words to be spelt and provides definitions and usage of the words in sentences (to great comic effect) handles this elimination is a crowd-pleaser, especially since, on opening night, the last “contestant” left standing was actually a good speller of arcane words – how Payne chose to bring about his elimination got probably the biggest laughs of the evening.

With such an excellent cast working in harmony it’s difficult to point to any single cast member for praise, so let’s be inclusive. Mooney captures the nerdy awkwardness of his character with perfection, showing that he uses his intelligence as a defense mechanism to ward off the slings and arrows of disdain – his “Magic Foot” number is a deft weaving of character into song. Then there’s Ekwall, whose blond hair is pulled back tightly into two pigtails (emphasizing the pressure she lives under) – her character is total kinetic energy, wound so tight that words fly out of her mouth like bullets being fired by a machinegun (perhaps a bit of a detriment when it comes to catching all of the lyrics when she sings). 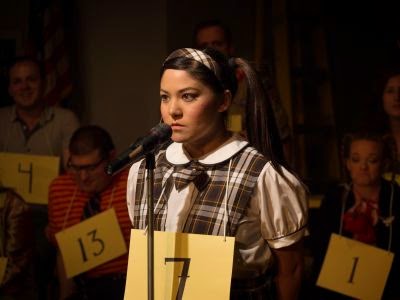 As for the goof-ball Leaf, Barlowski has the weirdness down to perfection – he flaps around the stage like a chicken on LSD and goes into a face-twisting, eye-crossing trance when he spells his words. As loose as Leaf is, Marcy is regimentally rigid, and Naff ably captures the self-induced pressure she is under – her encounter with “Jesus” and her plaintive “I Speak Six Languages” number, which set her character “free,” is an entrancing epiphany. 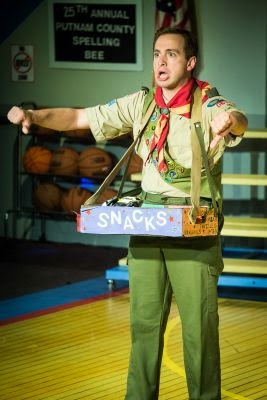 Tolentino gives his character, the Boy Scout, just the right amount of earnestness and his two set-pieces – first when he must somehow hide his erectile embarrassment and second, at the opening of the second act, when he is demoted to selling candy to the audience – are both crowd-pleasers. 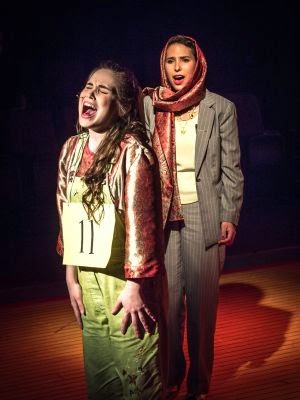 Finally, there’s Sannes as the sweet-as-pie Olive, a sweetness that hides her pain, loneliness and longing for her mother to return. Her number, “The I Love You Song,” sung with Kron playing the mother and Payne the father, simply stops the show, her plaintive “Mother, Mother, Mother,” echoing in the audience members’ minds long after the blackout.

Of those running the show, Kron gives her character just the right touch of rah-rah enthusiasm and is a lovely, sweet-voiced, lithe addition to the ensemble numbers, while Newsome is excellent at the drollery needed to bring off his character, a man who hides his disappointment at always being the “vice-principal” until he explodes mid-way through the second act. Finally, Payne, in his multiple roles, is believably street-tough as Mahoney, but ably switches character to be a doting “mother” and an aloof, emotionally-challenged “father.”

There’s simply not much, if anything, to complain about with this production. The pacing is such that the two hours (with one intermission) seem to fly by. Tracy Flater, the Playhouse’s executive director, was sitting in the audience house right on opening night. You could see the pleasure on her face as the audience reacted to the subtle (and not so subtle) one-liners, the sight gags, the ensemble numbers. It must have been music to her ears.

If you’re looking for an engaging night at the theater that will have you leaving with a smile on your face, then “Spelling Bee” is a good bet – it’s a lot of goofiness with just a touch or two of pathos. And if you’re a logophile, sign up to be a contestant – you might just win some apple juice.