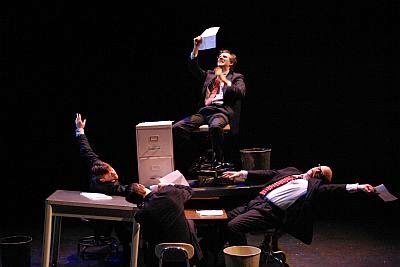 
What’s the connection between exploring and getting fired from an insurance company that’s desperately downsizing after an economic meltdown? None, you might say, save that in both cases you find yourself out in the cold. Well, if that’s your answer then you’re just not creative, or at least not as creative as playwright Nick Ryan and Split Knuckle Theatre, for the two have joined forces to create “Endurance,” a sprightly, inventive piece of physical theater that just opened at ’s Stage II.

In a book about directors of musicals, Graciela Daniele is quoted as saying that the audience is “the final collaborator.” Proof of this can be found if you attend “Endurance,” for the audience is called upon to do some work – not physical, but a bit of imagining to make the play come to life, for the four skilled actors are given only three desks, three waste baskets, a filing cabinet and a coat tree to work with yet are charged with creating not only a bustling office but also a ship being slowly crushed by ice and its crew surviving on ice floes. That they successfully accomplish this…and more…is a credit not only to them but the audience’s ability to “fill in the blanks.” In his book on Broadway directors, author Larry Thelen notes: “An audience that has to work a bit throughout the experience is an audience that is more dedicated to it.”

There are really two plays going on here. The first deals with the aforementioned insurance company and four of its employees who are hanging on by their fingernails as those about them get the axe. One of them, an insecure office drone named Walter Spivey (Christopher Hirsh) fears the worst when he is called before the faceless powers that be – they’re faceless because they have the waste baskets covering their heads, one of the many delightful transformations and visual tropes that occur during the play. Expecting to be let go, he is instead given a promotion and charged with not only managing his department but also seeing that over 4,000 back-logged insurance claims are handled in a three-month period. Suddenly he has been put in charge of the three men with whom he has been working and he doesn’t believe he’s up to the task.

Seeking guidance, Spivey goes to the library (the company won’t fund sending him to a seminar or even approve the expense of his buying a book on management – the executives even caution him about late fees on any book he gets from the library). In the library, in a hilarious scene, he searches the shelves, pulling down various books written by self-improvement gurus. Finally, he stumbles upon a different sort of book – “Endurance: Shackleton’s Incredible Voyage” -- which details the harrowing experience of Sir Ernest Shackleton and his 28-man crew and their two-year ordeal while attempting to explore . This book becomes Spivey’s guide, and his finding it creates the connection between the first play and the second, a dramatization of Shackleton’s experiences.

Once the two “plays’ are established, the four actors – Hirsh, Jason Bohon, Andrew Grusetskie, and Greg Webster -- seamlessly shift back and forth in time: at one moment they are harried employees, the next they are crew members fighting for their lives. In these time shifts they are, amazingly, able to create quite believable characters, with Webster taking on the role of Shackleton. 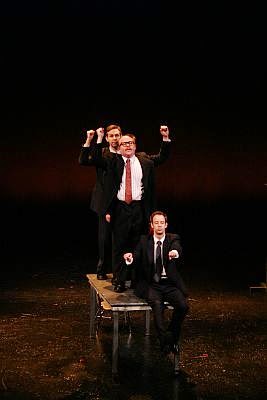 With minimal costume changes – just some hats and a shawl, really – the actors bring to life a host of characters while physically manipulating the few props they have – chief among them the desks, which serve as, among other things, a shower, an elevator, several boats and menacing towers of ice. Assisted by lighting designer Dan Rousseau, with music by Ken Clark (there’s no credit for sound design, but whoever is responsible should get some type of award), the four actors…with the help of the audience…create two distinctly different, menacing, believable worlds, and the great thing is, there are laughs aplenty, especially when we are in the “insurance” world, for playwright Ryan has a quiver full of barbs, all dedicated to corporate America, and they are often razor sharp…and funny.

The sheer physicality of the production is amazing. Whether the four actors are processing claims – a mindless routine set to pulsing music – or towing boats across the ice, they are, in the process, presenting a graduate seminar in how important movement and control of the body are to acting, but don’t get me wrong, this is not some self-aggrandizing, thespian ego trip. No, the four (interestingly, no one is listed as director, which says a lot about how this show was brought to life) are intent on telling a story, or rather, two stories, and they succeed. When the sailors, facing almost certain death, gather together and sing to buck up their spirits, it’s a haunting moment; when Spivey, daunted by the task set for him, has a dream about how he might improve office productivity, and in the process give his charges a sense of purpose (a sequence accentuated by a hand-held light), it’s a stunning piece of theater.

Anyone interested in creative theater that engages the mind, the heart and the soul should not miss “Endurance,” if for no other reason than to see what can be done with three desks and three waste baskets. In an era often dominated by excess and over-production, “Endurance” cleanses the theatrical palate and again makes us realize what four talented actors are capable of creating…almost out of thin air.