STONC Delivers the Beat That Can’t Be Stopped 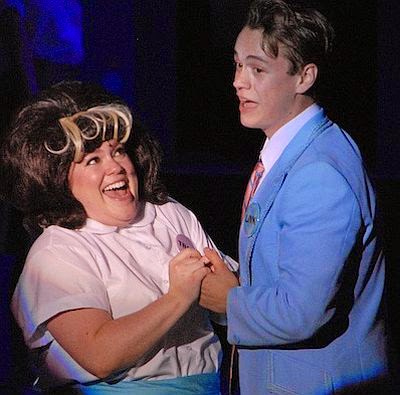 
Tracy Turnblad is at it again, shaking her hips and shaking up the good folks of Baltimore as she posits the audacious concept that blacks and whites should be seen dancing together on the city’s favorite teen dance television show, The Corny Collins Show, which showcases “the nicest kids in town” (Not!) Yes, it’s “Hairspray,” that campy, “corny,” musical that defies you not to tap your toes or do a little in-seat bugaloo, and it’s currently delighting audiences at the Summer Theatre of New Canaan under the able direction of Allegra Libonati.

In past years, STONC has staged two major musicals during its season, so the decision to go with an extended run of just one show (“Hairspray” plays through Aug. 3) was a bit of a risk. If the show was a flop they had a dead season on their hands. The risk, however, seems to have paid off, for although this production of “Hairspray” is not without its flaws (most of them minor), the sheer exuberance of the cast and the energy that pulses from STONC’s expanded stage give the show whatever legs it needs to carry it through until closing. I got the feeling that by the finale a lot of the audience members had to restrain themselves from jumping to their feet to join the cast on-stage for just one more chorus of “You Can’t Stop the Beat” – the show is that infectious.

Based on the John Waters 1988 film of the same name, “Hairspray,” with music by Marc Shaiman, lyrics by Scott Wittman and Shaiman, and a book by Mark O’Donnell and Thomas Meehan, tells the story of one Tracy Turnblad (Rebecca Spigelman), a size-challenged young lady who dreams of being a regular on The Corny Collins Show and, just perhaps, winning the heart of the show’s main heart-throb, Link (Nick Pankuch). Standing in her way is Velma Von Tussle (a very effective Jodi Stevens) and her daughter, Amber (Caroline Lellouche), Link’s current main squeeze. Another naysayer is ’s mom, Edna (traditionally played by a man – in this case Greg London), who has been defeated by her size and become a recluse. 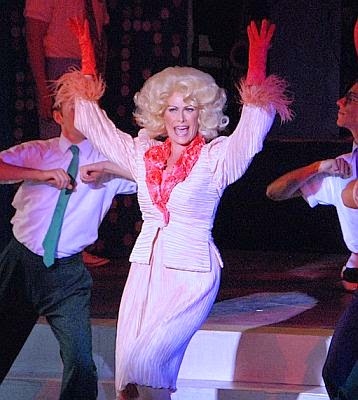 However, does have a cheering section, albeit a small one, consisting of her best friend, Penny Pingleton (a vivacious Sharon Malane) and her dad, Wilbur (Nick Reynolds). When Tracy expands her goals to include racial integration she gains the support of Motormouth Maybelle (A’lisa Miles), the host of the once-a-month “Negro Day” on the Corny Collins Show, and the grudging respect of Corny (Andrew J, Mauney) himself.

Of course, none of this is trenchant drama, nor is it meant to be. If you seek a serious theatrical discussion of prejudice stemming from size, race or gender go elsewhere – and besides, who wants to get serious on a lovely summer’s evening? Instead, settle in beneath STONC’s new tent and enjoy some fine performances, starting with Spigelman’s . Sporting some outrageous hair-dos (compliments of Bobbie Clifton Zlotnik), Spigelman gives just the right balance of teen effervescence and dawning social conscience. Whether she’s wishing Baltimore a good morning, hearing bells or suggesting that it takes two to make life worthwhile, Spigelman is dead-on, and she has to be, for right behind her, and at moments almost stealing the show, is Malane as Penny, whose endearing, gum-chewing cluelessness is delightfully maintained until her transformation (the caterpillar-to-butterfly moment is always a crowd-pleaser). 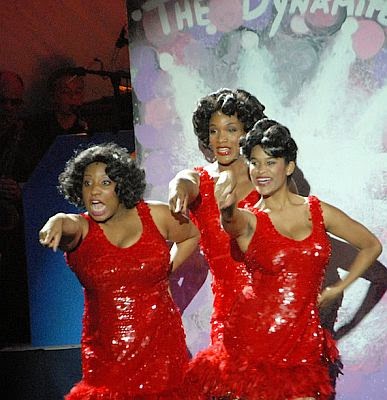 Equally satisfying are Stevens, who does a great turn with “Velma’s Revenge,” and London and Reynolds as the senior Turnblads – their rendition of “You’re Timeless to Me” is a show-stopper, not least because they have a certain freedom to ad-lib, much to the audience’s delight. In fact, just about everyone up on the stage delivers. One might quibble that the performances of Brian Sillman and KeLeen Snowgren (listed in the program as playing male and female authority figures) might be toned down a bit – they’re just a bit too campy, even for “Hairspray.” On the technical side, additional quibbles might extend to some rather loose work with follow-spots and staging, especially in some of the ensemble numbers, that could have been framed a bit better, with more perceptive use of dominant and subordinate stage positions.

Grumbles aside, this production of “Hairspray” is exactly what summer theatergoers are looking for: a toe-tappping, ear-pleasing musical with enough eye-candy to require going on a visual diet for at least a week after seeing the show. The audience the night I saw the show ranged from children not long out of diapers to senior citizens – and everyone seemed to have had a good time and, based upon reaction to the finale, agreed that you simply can’t (and don’t want to) stop the beat.