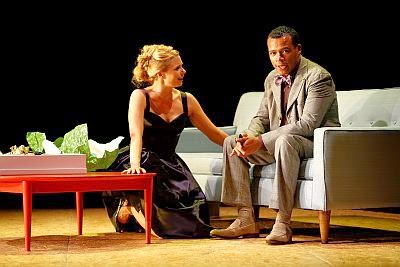 Liv Rooth and LeRoy McClain in “Nora."
All photos by by Carol Rosegg

There are plays that deal with universal themes and thus can be staged in any number of ways. “Antigone” works whether it is staged in modern dress or Greek costuming; many of Shakespeare’s plays – “Hamlet,” “Julius Caesar,” “Richard III” -- are often presented in the context of eras other than those the playwright originally envisioned; “Death of a Salesman” is as relevant today as it was when it debuted (perhaps even more so); “The Glass Menagerie” speaks to eternal familial verities. And then there is Henrik Ibsen’s “A Doll’s House,” first written and produced in 1879 and now on stage at the Westport Country Playhouse as “Nora,” an adaptation by Ingmar Bergman with translation by Frederick J. Marker and Lise-Lone Marker.

Stripped by Bergman of minor characters and extensive exposition, “Nora” is still “A Doll’s House,” and as such it has at its core the plight of a woman in a male-dominated society. Yes, in 1898 Ibsen protested that he had written the play not to support women’s rights but rather to ponder the need for people, whether male or female, to find their core humanity, but you can’t get around the fact that this particular person’s search deals with a woman living in a repressive, patristic society that constrained women to restrictive roles. Thus, I would suggest, period is important, and it is period that director David Kennedy and scenic designer Kristen Robinson have striven to eradicate, and in so doing allowed the play to break away from its 19th-century moorings and float off into an undefined world, an “every-place” that the text simply cannot support. 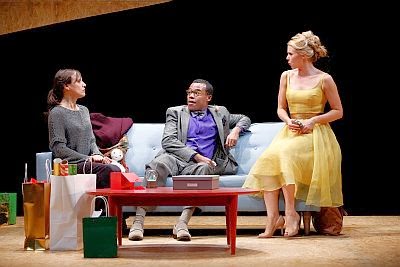 Nora (Liv Rooth) is married to Torvald (Lucas Hall), who has just been promoted to manager of a bank. This means more money for the family and greater security, but it also means that Nora will be able to pay off a loan she took out with Krogstad (Shawn Fagan) under false pretenses and without the knowledge of her husband (illegal at the time), a loan she sought so Torvald could recuperate in Italy from some sort of stress-related illness. Torvald despises debt – Nora is in debt, and in debt to Krogstad, whom Torvald is about to fire. Nora unburdens herself to her old friend, Kristine (Stephanie Janssen) and considers seeking help from a family friend, Dr. Rank (LeRoy McClain), who is both smitten with Nora and terminally ill. The driving force here is Nora’s need to conceal what she has done and Krogstad’s need to save his job…and Torvald’s sublime belief in his right, as a male, to dictate and dominate – in effect to define how Nora will live her life. 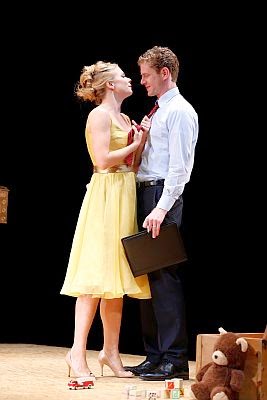 How this all plays out is dictated by time and place. Where are we? Robinson’s minimalistic set hints at the possibility that we are in the 1950s (all we have is a couch to go by), as do Katherine Roth’s costumes, but the production refuses to set the play in a specific time period so we are left to judge the actions of the characters based on dialogue that is at times modern and at other times Victorian, and this vagueness hampers the actors’ interpretations of their roles. This is most apparent in Rooth’s take on Nora. She is, at least through most of the play, a seemingly beguiling child-wife not above using her femininity to get what she wants (a character out of “Real Wives of…wherever”). What she seems troubled by is revelation of her “sins,” not that she is being forced to be someone she is not. She seems comfortable in her role as a married coquette, so much so that her “epiphany,” played out in the Torvalds’ bedroom at the play’s conclusion (now we’re into “Friends” territory) seems simply out of character. Where was the sense that this woman who suddenly demands to be taken seriously lurked beneath the simpering surface? The basic problem is that we never get the sense that Nora, against her better judgment, was being forced to act the part of the doll – she seems to be too comfortable in that role.

In fact, all of the actors seem just a tad unsure of whom they are supposed to be. Janssen as Kristine seems to be a product of the 60s, while McClain’s Dr. Rank is modish 80s with just a touch of Capote foppishness, while Hall’s Torvald could easily have been a character in “The Bonfire of the Vanities,” and Fagan’s Krogstad seems like a refugee from “Glengarry Glen Ross.”

The bipolarity of the production – lack of consistent vision -- is no more evident than in its final moments. There is no door-slamming by Nora. No, rather, there is a coup de theatre that suggests more than the play delivers, a visual metaphor that simply does not ring true, not if we have a Torvald of the 1870s or even the 1950s…or even the 80s. We are supposed to accept that Torvald has learned a lesson that strips away his masculine superiority and, by implication, a society’s paternalism is laid bare. But we don’t. We have a Torvald lost in space and time, as is this production.

“Nora” runs through August 2. For tickets or more information call 203-227-4177 or go to www.westportplayhouse.org
Posted by Geary Danihy at 5:35 AM