“Gypsy” – The Grit and the Glitter 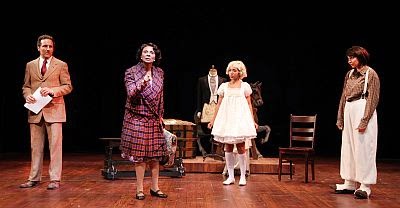 It seems almost a prerequisite that an actress taking on the role of Mama Rose in “Gypsy” have an innate sense of the “business,” an understanding of the grit beneath the glitter that is show business. Ethel Merman, who created the role, certainly had that knowledge, as did Angela Lansbury, Tyne Daly, Bernadette Peters and Patti Lupone -- all have played the role. Now, at the Connecticut Repertory Theatre at UCONN, Leslie Uggams takes the stage as the iconic Ur-stage mother and proves without a doubt that she also has seen the grit. Her performance – and the entire production – is a quite satisfying evening of theater but, as the saga of Mama, Baby June, Louise and Herbie unfolds, you sense there is something missing.

What that “something” is is not readily apparent, for under the steady direction of Vincent J. Cardinal, with choreography by Cassie Abate, the production rolls along at a steady pace, with familiar number after familiar number performed with style, but as you watch Rose and Herbie interact it slowly dawns that what is missing is Rose’s underlying sensuality, a power as raw as is her drive to control, her lust for success and her desire to live life through her children. That power is what, in part, makes Rose so terrifying, and that soupcon of terror is not there. Rose is demanding, Rose is obnoxious, Rose is brash, Rose is bullying and insensitive to others’ needs…but she, at least in this incarnation, is not Lilith. Hence, the “You’ll Never Get Away From Me” number – Rose’s response to Herbie’s threat that he might just pack up and leave – seems all surface and no depth. Herbie can’t get away from Rose because that’s what the song’s lyrics say, not because of the hold you feel Rose really has on the man.

That being said, there’s quite a bit to like about this production, starting with Uggams’ performance itself. Setting aside the “seductive” issue, she creates a quite believable Rose with crisp, dead-on body language, exquisite timing and stares and glares that would stop a charging bull in its tracks. Her performance is matched by that of Amandina Altomare’s as the adult Louise – she simply glistens on stage, whether as naïf or seasoned ecdysiast (never a mere stripper!), and her interaction with Tulsa (Luke Hamilton) as he tries out a new dance routine (“All I Really Need is the Girl”) is simply charming. Equally supportive are Alanna Saunders as June and Scott Ripley as Herbie.

There are quite a few stand-out moments in the show, chief among them June and Louise’s duet – “If Momma Was Married” – and Louise’s education about the world of the stripper – “You Gotta Get a Gimmick” – performed by Tessa Tura (MacKenzie Leigh Friedman), Electra (Cassandra Dupler) and Mazeppa (Ariana Shore), with Shore setting the mood with a hilarious send-up of the quintessential, world-weary, gauche stripper.

Of course, anyone familiar with the show knows what all of this is leading to: “Rose’s Turn” – the show’s emotionally riveting finale. It is here, again, that Uggams succeeds in displaying all of her character’s quirks, foibles and fears save for her sensuality. The number stopped the show, as it should, but there was just that hint of unbridled passion bubbling to the surface that was missing.