“The Bikinis” Bring Back Memories 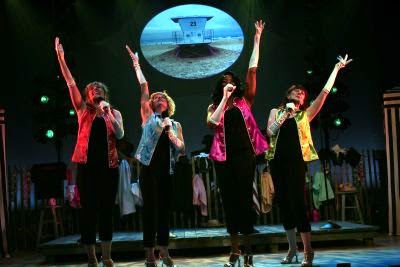 The cast of "The Bikinis"


Although anyone can enjoy “The Bikinis,” the “musical beach party” revue currently on the boards at Long Wharf Theatre, if you are of a certain age – which means you grew up watching “Howdy Doody,” graduated to “The Mickey Mouse Club” and remember the Sunday evening when The Beatles appeared on the Ed Sullivan Show – then this light-as-air pastiche of songs from the 60s, 70s and early 80s is right up your alley.

The frame for the presentation of over 30 songs from the multi-decade era is mere froth: a one-hit girl group gathers on the shore 30 years after their 15 minutes of fame to save a seaside trailer park from the clutches of a developer by giving a benefit contest. Residents have been offered a tidy sum to sell out – should they cave or hold fast? None of this is taken very seriously until the show’s final moments when, suddenly, the audience is asked to care about the decision – which it obviously doesn’t. It’s there for the songs, not the soap-opera drama. This is the only false note in what is otherwise a highly enjoyable evening of summertime diversion.

Yes, it’s the songs that drive the show, and they are performed under Ray Roderick’s direction (he also choreographed) by a fine foursome of experienced, talented actresses: Valerie Fagan, Regina Levert, Karyn Quackenbush and Lori Hammel. The trip down begins with “It’s in His Kiss,” quickly followed by that “Yellow Polka Dot Bikini.” The quartet has the style and tone of these songs down pat, and the banter between the four (until the finale) is frolicsome rather than intrusive. The first act covers what in retrospect seems the innocence of the pre-Nam era, including the hormonally-charge movies that pandered to teen lust, films such as “Beach Blanket Bingo” – introduction of the film allows for Annette and Tommy (if you don’t know, don’t ask), to make an appearance, as well as Nancy Sinatra in her boots and a campy “Secret Agent Man.”

The second act brings us forward to the late 60s and 70s, a time stained by the war and the protests it engendered. The mood turns reflective with the first song, a take on the Mommas and the Poppas’ “Time of the Season” accompanied by a montage of photos of young men serving in . It’s presented as a love song and a lament, and as the song unfolds and the images appear on the scrim above the singers you can feel the memories – often bittersweet, certainly conflicted – rising from the audience to fill the air. It is a palpably effective moment for those who lived through the era and either fought…or protested…or did both.

All things pass, all things change, and before you know it the conflict of the Viet Nam era is replaced by the hedonism of the days of Disco, and it is here that the quartet really comes into its own with a series of disco numbers that, you sense, get aged hearts beating just a bit faster and arthritic toes a-tapping. There’s a great build here, starting with the country and western “When Will I Be Loved” that segues into “Last Dance,” followed by “I’m Every Woman, “ “I Will Survive” and finally a no-holds-barred “It’s Raining Men.”

And then the show turns serious – or at least takes itself seriously – and the heat and electricity that has been building simply dissolves as time is wasted dealing with ownership of property and the responsibility to be true to your roots – it’s so counter-intuitive to what the evening is all about that the audience, that was moments ago revved up, slouches back into its seats. Strong recommendation: cut the melodrama and take advantage of where the audience wants to go. The second act builds and builds, and then spends all of its energy on something the audience could care squat about…and since it happens late in the show, well, no time to make up for mistakes.

The finale may leave the audience feeling a bit cheated, but on reflection, most of the evening is entertaining and just what is billed – a frolic and an exercise in “remember when.” If you are of a certain age, gather those of your friends who have survived the decades…and divorce…and downsizing…and empty-nesting…and both male and female menopause…and go out to dinner…have a couple of glasses of wine…and then go see “The Bikinis”…and let the memories flow.