"Fiddler on the Roof" -- Goodspeed Opera House -- Extended thru Sept. 12 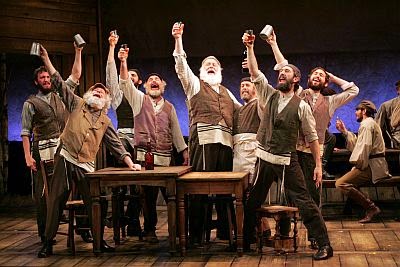 "To Life!" Cast members of "Fiddler"
All photos by Diane Sobolewski


Goodspeed Opera House is once again doing what it does best: vividly brining to life an iconic American musical. In this case it’s “Fiddler on the Roof,” which opened on Broadway in 1964 and walked away with nine Tony awards. Under the sure-handed direction of Rob Ruggiero, who has recently become the Opera House’s master of musicals, this fine production makes you realize why “Fiddler” is so endearing and enduring – yes, there are the songs that have become a part of the American Songbook, but it’s the people originally created by Sholem Aleichem that make “Fiddler” shine and resonate, and it is to Ruggiero’s credit that he has used the House’s somewhat restrictive stage to focus on their humanity, transcending the idea that this is a “Jewish” musical to emphasize that this is a show about fathers and mothers, sons and daughters, regardless of their religious or ethnic backgrounds. 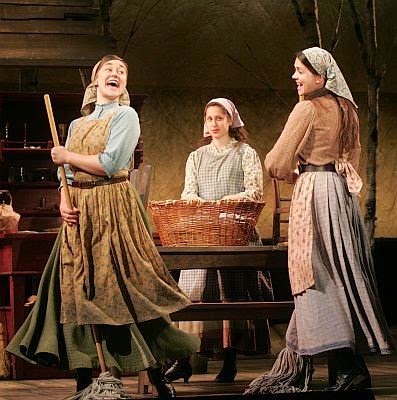 With music by Jerry Bock, lyrics by Sheldon Harnick and a book by Joseph Stein, “Fiddler” is set in the Pale of Imperial Russia circa 1905, specifically the tiny , where Jews and ethnic Russians live together in uneasy peace. The focus is on Tevye (Adam Heller) a poor milkman saddled with a somewhat shrewish wife, Golde (Lori Wilner) and five daughters He is a humble (yet shrewd) man who suggests in the opening number that he, his family, and the entire Jewish community are like fiddlers on a roof, playing their individual parts while attempting to maintain their balance in an ever-changing, often threatening world. A nice touch here is that Ruggiero has brought the fiddler (Max Chucker) down from the roof and involved him in many of the scenes as a counterpoint to the gaiety or sadness and as a constant reminder to Tevye of the tenuousness of life.

Zero Mostel created the role of Tevye on Broadway, after which Chaim Topol claimed the part as his own, starring in the 1971 film adaptation. These are big shoes to fill, but Heller does so with ease. His all-suffering, pragmatic Tevye is a bit less demonstrative than Mostel’s and a bit less brooding than Topol’s, giving us a hard-working dairyman who appreciates irony, hopes for the best, expects the worst, and has a working yet argumentative relationship with his God, whom he talks to on a regular basis (and who doesn’t seem bothered by the fact that God never deigns to hold up His end of the conversation). 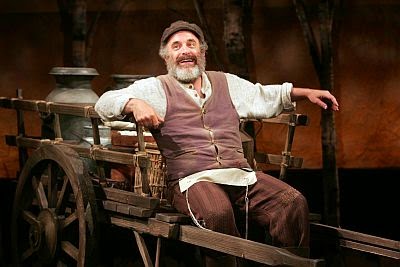 Swirling around Tevye and his family are several circles: the Jewish community in which he lives and, beyond that, the Russian community that, at any moment, might choose to opt for brutal persecution rather than benign disdain. This is a rich if somewhat troubled tapestry filled with memorable characters, all created with a great deal of sincerity by the cast. Tevye’s relationship with his wife, Golde, is especially poignant, and Heller and Wilner create just the right sense of surface antagonism beneath which hides an abiding love captured in the second act’s “Do You Love Me?” -- perhaps the most moving moment in the show. I’ve seen this musical many times but I can’t remember being so touched by this scene. 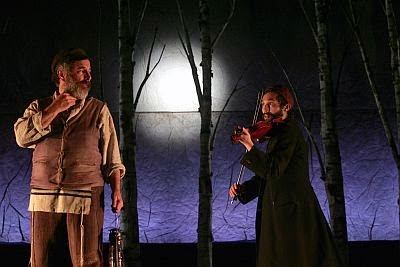 The musical is also about the inevitability of change, and this is captured in three segments as each of Tevye’s three oldest daughters approaches marriage. The first to be wed is Tzeitel (Barrie Krenik), who is betrothed to the butcher, Lazar Wolf (John Payonk), a May-September marriage arranged by the local marriage broker Yente (Cheryl Stern). But Tzeitel loves the poor tailor Motel (David Perlman) and, in a touching scene, begs her father to let them wed. In the first of his “on-the-one-hand-on-the-other-hand” arguments with himself, Tevye finally agrees, though it goes against tradition, and this leads to a wonderfully staged scene in which Tevye must, by indirection, convince his wife that Tzeitel should marry Motel. He does so with the assistance of two spirits, Grandma Tzeitel (again, Stern) and the butcher’s dead wife, Fruma-Sarah (Joy Hermalyn). It’s a wild, audience-pleasing ride.

If there is any “problem” with “Fiddler” it is that the second act is markedly darker, for change brings pain. There may be light at the end of the tunnel down which the Jews are traveling as they leave Anatevka, but the audience is well aware of what that tunnel will wind through before any of these people reach that light. What saves the musical, and especially this production, from the darkness is Tevye’s humanity and spirit, qualities that Heller brings forth in all of their shining yet somewhat tarnished reality. As Tevye lifts his cart and begins to trudge off into the unknown we can’t help but wish him “God’s speed.”