Ivoryton Shakes Up the Summer 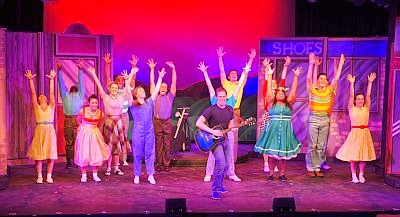 The cast of "All Shook Up"


This seems to be the season for rock and roll nostalgia. There’s “Hairspray” at the Summer Theatre of New Canaan, “The Bikinis” playing at , and now “All Shook Up” out at the Ivoryton Playhouse. The good news is, you’ll have an enjoyable evening of theater no matter which of the three you attend, but if you opt for the Ivoryton show, you’re in for a special treat in the form of the two delightful leads, Danielle Bowen and Preston Ellis, two fine young actors whom you will have absolutely no trouble watching. 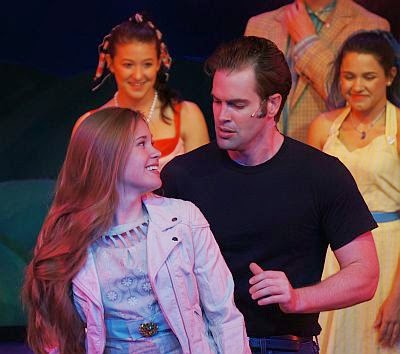 The musical, with book by Joe DiPietro, is a mash-up of “Footloose” and Shakespeare’s “Twelfth Night,” channeled through Elvis Presley. Directed and choreographed by Richard Amelius, “All Shook Up” is a lighthearted, tongue-in-cheek romp through much of the Presley songbook that follows a young grease monkey named Natalie (Bowen) who falls for a motorcycling roustabout named (Ellis) when he rolls into a town that is more straight-laced than your great-aunt Mabel’s corset. , a fun-loving guy who has a way with women and juke boxes, feels it his mission to bring some life to the repressed citizenry. His charisma is such that soon many of the townsfolk start falling in love, with all of the wrong people, a game of amorous Twister that is, literally, spotlighted in the finale to the first act, a quite moving rendition of “Can’t Help Falling in Love.”

Complications abound, exacerbated by the obligatory disguise of a young lady posing as a young man named Ed who attempts to woo the sensuous Miss Sandra (a delightfully lustful Mara Jill Herman) for . Miss Sandra is also being pursued by Natalie’s father, Jim (R. Bruce Connelly), while Dennis is pursuing Natalie, while Sylvia (Onyie) is pursuing Jim, while the taciturn Sherriff Earl (Larry Lewis) is silently pining for Mayor Matilda Hyde (Melissa McLean) and the mayor’s son, Dean (Logan Scott Mitchell) is tentatively making overture’s to Sylvia’s daughter, Lorraine (Danielle Famble). Well, you get the picture. Of course, it all works out in the end with multiple marriages and everyone proclaiming their “Burning Love” for their new mates. 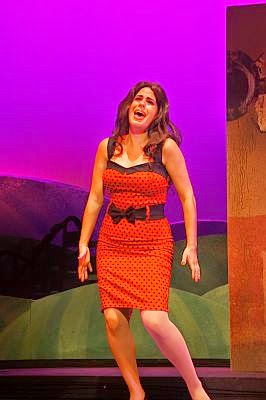 Backed by seven musicians ensconced in a pit hidden below the stage, the entire cast, including the male and female ensembles, nails one Presley song after another, with “One Night With You” used as a recurring, comedic theme. However, as noted above, it’s the two leads that give the extra juice to this production.

Ellis, a seasoned pro, gives his character just the right mix of sneer, bravado and joie de vivre – think Marlon Brandon with manners. He also has great timing and a strong comedic sense about him. Playing against him is Bowen who, amazingly enough, is only a rising senior at . Based on her performance you certainly couldn’t tell that she hasn’t yet graduated. Whether she is playing the grease monkey, or Ed with a two-day-old beard as a disguise or, finally, the lovely Natalie, she is a delight. She may not steal the show – that crown goes to Herman – but she doesn’t have to, because from the moment she walks on stage she steals the audience’s heart. One can only hope that once she graduates she will find her way back to to grace one of its many stages…before Broadway grabs her up and doesn’t let her go. 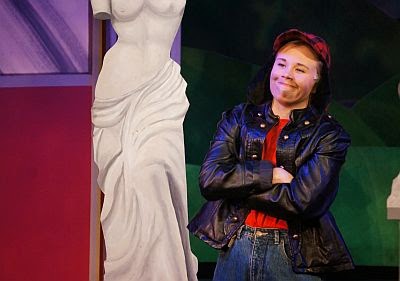 So, if you’re an Elvis fan, or just want to enjoy an all-smiles evening of summer theater, get yourself out to Ivoryton. Yes, you’ll be “All Shook Up,” and will sense “The Power of Love.” You’ll have to pledge to “Don’t Be Cruel” and be challenged to “Follow That Dream,” question why “Fools Fall in Love” and, once again, acknowledge that we all, at one time or another, “Can’t Help Falling in Love.” In other words, you’ll have a good time.