"Familiar" Too Fraught with Themes 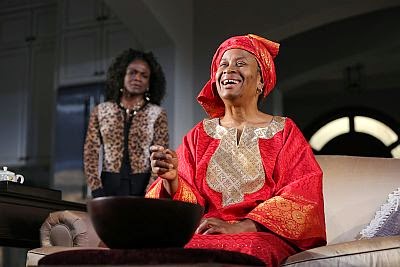 Patrice Johnson Chevannes and Kimberly Scott in Familiar.
All photos by Joan Marcus.


As the old ad campaign says, “You don’t have to be Jewish to love Levy’s,” and you don’t have to be African American, or Zimbabwean, for that matter, to like “Familiar,” a new play by Danai Gurira enjoying its world premiere at the Yale Repertory Theatre. Slow to get off the ground and just a tad ponderous and preachy in its wrap-up, “Familiar” satisfies for most of its two acts, for it’s a familiar family saga of emotional conflict, heartbreak, misunderstandings, rivalries and, of course, laughter.
The play is set in suburban Minneapolis, circa 2010, but Zimbabwe, formerly known as Rhodesia, suffuses the environment, for Marvelous Chinyaramwira (Saidah Arrika Ekulona) and her husband Donald (Harvey Blanks), though successfully living the good life in America -- she a biologist, he a lawyer -- are haunted by the land they once called home, though the nature of the spirits that lurk in the dark will not become manifest until well into the second act. 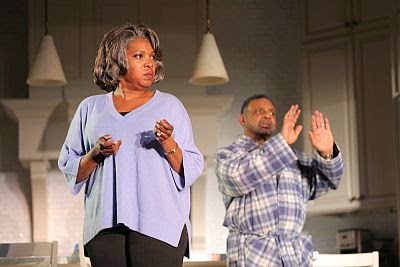 The play, directed by Rebecca Taichman, opens with the couple’s younger daughter, Nyasha (Shyko Amos), returning home from a trip to . She has an attitude, primarily because her domineering mother doesn’t seem to appreciate her life pursuits – music and feng shui – but also because she hasn’t been included in her older sister’s bridal party. Tendikayi (Cherise Boothe), a lawyer, is about to marry Chris (Ross Marquand), a white man. It will be a traditional ceremony, but the question arises as to which tradition will be honored, for Annie (Kimberly Scott), Marvelous’s sister, has traveled from Zimbabwe ostensibly to see that Shona traditions are honored, which includes the groom gifting the bride’s family with a cow. There are a lot of arguments, and some of what is being argued about is lost because the actors often bite into each other’s lines (a directorial decision?), lines which often contain word or phrases from the Shona language. One can understand why Baba Tendi (Dad) just shrugs and retreats – there are moments when the audience, as well, simply doesn’t know what is going on.

Observing and archly commenting on this multi-lingual clash of cultures is Margaret (Patrice Johnson Chevannes), Marvelous’s second sister, who lives with the Chinyaramwiras, and dragged into the bridal negotiations overseen by Annie is Brad (Joe Tippett), Chris’s brother, fresh out of the Army. 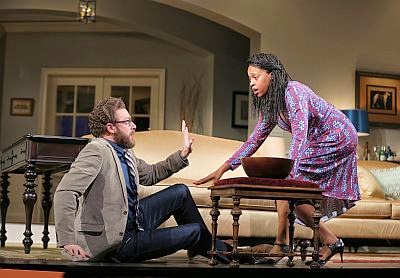 So, the stage is set for misunderstandings, family squabbles and cultural dysfunctions, which all work fairly well for the first act and most of the second, but Gurira has bigger fish to fry, for the dark spirits must rise, and when they do the play veers off into message-land, becomes a bit didactic, and ends with a scene reminiscent of old murder mysteries when the detective gathers all of the suspects into a room and solves the crime. Thus, instead of a dynamic ending, we have extended exposition, with many of the characters locked in place (Nyasha all but disappears behind a sofa – Annie is frozen on another sofa – Margaret spends most of the time shuffling her feet in front of the fireplace) as tales are told and the mystery is unraveled. It’s all capped by what is meant to be a touching scene of recognition between mother and daughter that rings hollow, for it is not earned. 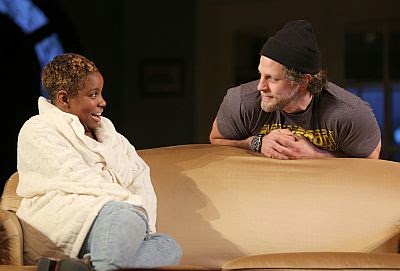 The basic problem here is that if a mystery is to be solved, if revelations are to be part of the climax, then there has to be a hint of what is in play right from the start, else said mysteries and revelations seem forced. To work off an old Hitchcock insight that he offered in a conversation with Francois Truffaut, if a bomb is going to explode you have to let the audience know that a bomb has been placed. The latter part of “Familiar” is a series of bombs exploding, but who knew they were there? It’s the difference between suspense and surprise, and that difference goes to audience engagement and, if I can trundle out an overused word, catharsis.

Still, for most of the two-plus hours, “Familiar” satisfies and engages, with a faultless cast, chief among them Scott, whose take on the embittered Annie is often mesmerizing. She is able to weave multiple motivations into her actions, chief among them maintenance of heritage and greed. Her movements are precise and facial expressions evocative. Blanks does a nice job as the much put upon husband, only faltering slightly when he is asked to deliver one of the play’s “messages” – you get the feeling that he really doesn’t believe what his character is saying, especially since Baba Tendi so easily gives up his dream after a tongue-lashing from Marvelous. As the engaged couple, Boothe and Marquand work well together – although Tendi’s desperate demands for sex after one of the “bombs” has exploded seems out of character – and Ekulona’s Marvelous is a picture-perfect take on a matriarch under siege.

All in all, you get the feeling that Gurira had a change of heart about what her play was about or, equally likely, learned what her play was about as she wrote the ending. If the latter is the case, then some rewriting of the first act is in order – you shouldn’t let the audience think it is visiting the and then shift into the land of the Lomans. For it all to work, the audience has to know the bombs are ticking.