You Don't Have to be Jewish to Like "Bad Jews" 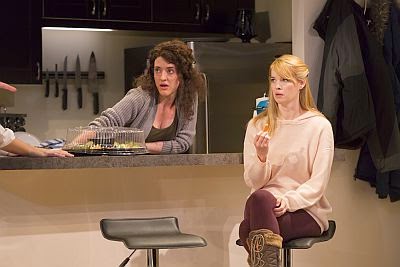 
Open any text on playwriting and in the first chapter you’ll likely come across this basic dictum: a play is about someone who wants something and someone who doesn’t want him to have it. All the rest is just icing on the cake. Joshua Harmon, whose “Bad Jews” recently opened at Long Wharf Theatre Stage II, has obviously taken those words of dramatic development to heart – with a vengeance. The result is a somewhat uneven but thoroughly enjoyable one-act play that offers enough verbal fireworks to light up a Fourth of July sky.

The setting is an apartment on the Upper West Side of (scenic design by Antje Ellermann) that belongs to college student Jonah Haber (Max Michael Miller). Actually, his parents, who live on the same floor, bought it for him, but he’s not complaining. He normally lives alone, but he currently has a guest, for his grandfather, Poppy, has just died, and his cousin, Daphna (Kelly McQuail) has come down from Vassar for the funeral. There will be more guests, for his brother, Liam (Michael Steinmetz) is flying in from a skiing vacation in Vail, bringing with him his latest girlfriend, Melody (Christy Escobar) for a family gathering to celebrate and honor the life of a revered patriarch. Yes? Well, not exactly, for this family – at least the members of the younger generation – are what you might call Hebraically dysfunctional. 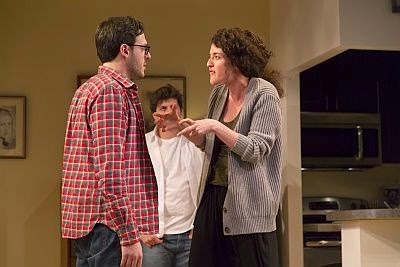 Daphna wears her Jewishness on her sleeve, and anywhere else she can display it. She is an opinionated, arch, acid-tongued young woman who plans, perhaps, to immigrate to , perhaps become a rabbi, perhaps marry a Jewish soldier, but what she definitely wants is her grandfather’s chai, a small, golden emblem that symbolizes “life.” There’s a back story to this particular piece of jewelry that involves the Holocaust and Poppy’s marriage, but it is also the play’s MacGuffin, for Daphna’s pursuit of this piece of jewelry is the motor that drives the play.

In contrast to Daphna, Liam (his Hebrew name is Shlomo) is apparently disdainful of Jewish tradition, especially as it is practiced in , what he terms a watered down version of an original falsehood. A graduate student studying foreign cultures (currently Japanese), he bridles at the very thought of spending an evening in the same room with Daphna, as well he should, for he is carrying their grandfather’s chai, which he plans to give to Melody when he asks her to marry him. Melody, of course, is the quintessential shiksa, a young woman whose straight golden hair is in direct contrast to Daphna’s mare’s nest. 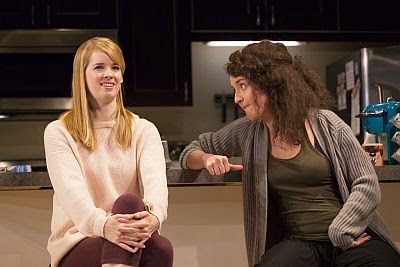 Thus the stage is set for confrontation, and it doesn’t take long for the knives to be unsheathed in the form of extended monologues and confrontations. These verbal pyrotechnics are the play’s strong points, and no one has a better time with them than McQuail, whose take on a pontificating Jewish princess is priceless. Often, all she needs to do is stare, arch her shoulders, slowly turn her head or roll her eyes to make her point, or jab a knife into soft flesh. Her initial entrance, however, is a bit confusing, or misleading, for the delivery of her first few lines might lead one to believe that her character is either mentally deficient or drunk – neither is the case.

Her character is counterbalanced by that of Liam’s, and Steinmetz also get’s a chance to orate and pontificate – his first monologue received enthusiastic applause on opening night, as much for the brio with which he delivered it as for its essential put-down of Daphna’s Hebraic holier-than-thou pose.

This is Daphna and Liam’s play, with Melody there as the Wasp shuttlecock that flies back and forth between the two cousins. Escobar does what she can with what Harmon has given her, and she has her moments, but it is Jonah’s character that seems all but superfluous, save for the play’s final moment, when the question arises as to who is most “Jewish” and who loved Poppy best. Thus, Miller has little to work with and finds himself often simply standing in place as the other characters have at each other. His character’s lack of development is striking – seldom does one come away from a play not knowing anything about a character who has been on the stage from almost curtain to curtain. 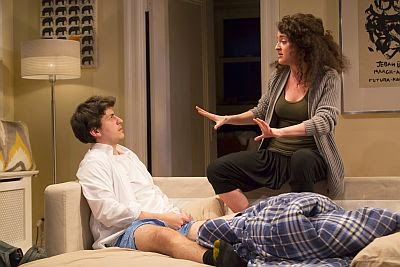 As directed by Oliver Butler, “Bad Jews” is a verbal jousting match that is enjoyable on many levels, not the least of which is the inherent argument about what denotes, or connotes, Jewishness, and it’s relevancy in this century. Beyond that, the play’s main delight is the sweet venom that flows from Daphna, verbal poison that McQuail delivers with aplomb, style and a shark-like sense for the flow of blood. From the moment McQuail’s character enters from the bathroom she owns the stage, and she never gives it up as she stalks over rather than around furniture. You may not like Daphna, but you can’t take your eyes off her, and you can’t wait for her next verbal explosion (as long as you are not the target of the eruption).

This is early days for the production, so the cast has yet to totally discover where and when the audience will react with laughter. Thus, some lines are delivered before said reaction is over and are all but lost. This, one can only assume, will be corrected as the cast grows into the play. Many of the lines that can be heard are priceless: sharp, funny and thought-provoking, making “Bad Jews” a quite engaging evening of theater.