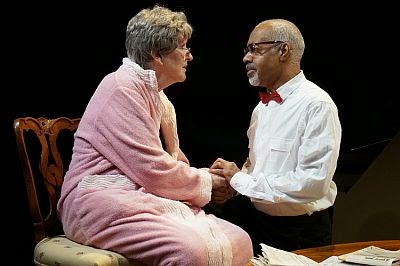 Rebecca Hoodwin and Lorenzo Scott. All photos by Joe Landry


There’s a delightful production of Alfred Uhry’s “Driving Miss Daisy” currently being offered at MTC Mainstage at its new digs in . A gentle, charming character study that teaches lessons without preaching, “Driving Miss Daisy” is tailor-made for MTC’s intimate setting, more so because you can watch, up close, some rather impressive acting.

For those not familiar with the storyline, Miss Daisy is Daisy Werthan (Rebecca Hoodwin), a spry, wealthy septuagenarian who flaunts her humble beginnings and is uncomfortable with change, yet change there must be, especially given her driving habits. Blaming her accidents on balky cars, Miss Daisy bridles when her son, Boolie (Mike Boland) suggests that her driving days are over and that he is going to employ a chauffeur, which Miss Daisy believes is putting on airs. Undaunted, Boolie interviews candidates and hires Hoke (Lorenzo Scott), a black man who has driven for other “fine” families in . Initially Miss Daisy is oil to Hoke’s water, but over the span of two-plus decades a bond forms between the two as they weather changes in their own lives and in the society that initially dictated the limits of their relationship. 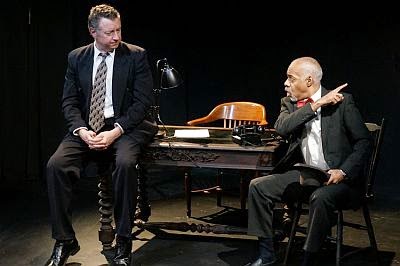 The play, sensitively directed by Kevin Connors, MTC’s executive artistic director, is a series of vignettes that essentially capture the arc of Daisy and Hoke’s relationship, with some sterling moments: Miss Daisy accuses Hoke of stealing a can of salmon, only to be brought up short by the man’s honesty; the two take a car trip to Mobile and, at one point, Hoke must leave Miss Daisy alone in the car – as dogs bark in the dark she calls out his name; there’s an ice storm, the roads are perilous, but somehow Hoke makes his way to Miss Daisy’s house, an arrival that leads to a touching moment; and then there’s the final scene, perhaps one of the best ever written for modern theater, that involves a piece of pumpkin pie, and an acknowledgement of the depth of a relationship that cannot help but speak to the human heart. 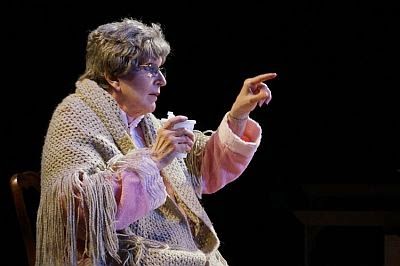 There’s some fine acting going on here. Hoodwin ably captures the spirit of her character and, given the proximity of the audience, uses subtle gestures and facial expressions to a fault. Perhaps most to her credit, she handles “big” emotional scenes with marked restraint, allowing the audience to divine what is actually going on inside her character. It’s a mesmerizing performance.

Boland is solid as the much put-upon son. His soft Southern accent is consistent throughout and he also handles the “emotional” scenes with restraint, and delivers his signature line – “Mama, you’re a doodle” – with a nice blend of love and frustration.

Scott’s role presents the most difficult task, for he must capture the essence of how blacks made their way in a repressive, racist society – smiling and respectful on the outside while understanding the dynamics of the society. One is reminded of the avuncular advice given in Ralph Ellison’s “Invisible Man”: “…agree ‘em to death.” As Hoke, Scott’s initial interview scene with Boland has him just a bit too animated – arms and legs in constant motion a la Stepin Fetchit. It’s a bit off-putting, but given that this interview occurs in 1948, it’s an apt portrait. The herky-jerky motions soon disappear as Scott brings out his character’s inherent dignity and bone-bred understanding of what it takes to make your way in a white man’s world.

The heart of this play rests in Miss Daisy and Hoke coming to realize their shared humanity, and this production captures this in no uncertain terms. Worth the price of admission is the look on Miss Daisy’s face as Hoke feeds her a piece of pie – it’s a precious moment that Hoodwin and Scott create with a gentle understanding and a sensitivity that makes the spine tingle.

If there are any problems with the staging of the show, it’s with the choice of entrance points – doors that lead to the foyer and the backstage area. As the doors are opened for the actors, lights spews house left and right, which is a bit distracting but can be solved by use of blackout screens. Other than that, Connors has used MTC’s intimate space quite well, creating an intimacy that the play supports and thrives on. All in all, this is good theater, which means it is both entertaining and emotionally satisfying.

“Driving Miss Daisy” runs through Feb. 22. For tickets or more information call 203-454-3883 or go to www.musictheatreofct.com
Posted by Geary Danihy at 7:25 AM