The Funny Side of Asperger's? 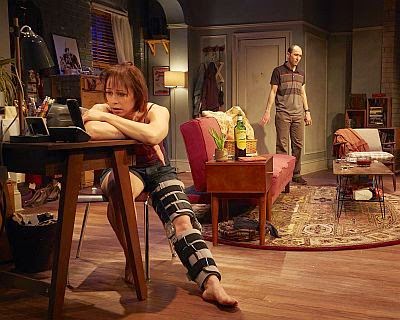 Paige Davis and Andrew Benator. All photos by Lanny Nagler

“Dancing Lessons,” a play by Mark St. Germain that recently opened at TheaterWorks, is a romantic comedy with a message, or a message play with romance – take your pick. It has the feel of early Neil Simon, with just a touch of a Hallmark made for TV film (the scene flow is certainly filmic). In other words, it’s touching and at times cute, often funny, though the running joke that autism is, by its very nature, humorous, wears a bit thin. As directed by Julianne Boyd, “Dancing Lessons” is kind-hearted kitsch without the bight of St. Germain’s “Becoming Dr. Ruth” and “Freud’s Last Session,” which were also boarded by TheaterWorks.

The set-up is “meet cute” with a spin. Ever Montgomery (Andrew Benator) and Senga Quinn (Paige Davis) live in the same apartment building. Senga (her aunt, possibly suffering from dyslexia, meant to name her Agnes) is a dancer who may never dance again, having been struck by a taxi, the accident making mince meat of her left knee. As the play opens she is in her apartment, a somewhat nondescript set by Brian Prather, swilling scotch and noshing on potato chips, brooding and feeling sorry for herself. She is disturbed by Ever, who comes knocking with a proposition: he wants one dance lesson and is willing to pay Broadway scale (he’s researched the exact amount a dance captain makes in a Broadway show) for the opportunity. Senga is not thrilled, especially since Ever seems a bit odd, the quintessential geek: awkward, socially inept, with a penchant for saying the wrong thing at the wrong time. Ah, but there is a reason for Ever’s gawkiness – he has Asperger’s syndrome. 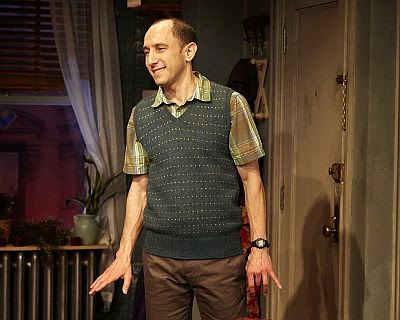 To understand Ever’s character one need only turn to a handy definition provided by webmd: “Asperger's syndrome, also called Asperger's disorder, is a type of pervasive developmental disorder (PDD). PDDs are a group of conditions that involve delays in the development of many basic skills, most notably the ability to socialize with others, to communicate, and to use imagination.” Often associated with autism, there are multiple variants of the disability, as Ever will lecture Senga about. In fact, Ever is a renowned professor – he just can’t bear being touched and needs to be warned when a joke is being told so he can give the appropriate response.

Much of the humor is derived from Ever’s problem, especially his inept conversational skills, his awkwardness, and inability to use his imagination – for him, what’s black is black and what’s white is white, but Senga will introduce him to shades of gray. There are moments in this one-act play, especially in the early going, when St. Germain’s research about Ever’s disability takes stage center and the dialogue has the feel of a lecture. Then there are other moments when the research is dramatized. As mentioned, those with Asperger’s have trouble with imagination, so there’s an entire scene devoted to Senga attempting to get Ever to imagine running into a white elephant who wants to have a conversation. The interaction between the two characters often seems forced, as if St. Germain was working off a checklist: dealt with this aspect of the disability, now on to the next. 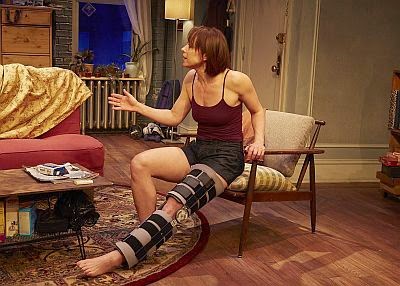 The “checklist” approach to creating scenes and writing dialogue presents some problems for the actors. Benator is impressive as the struggling Ever, but you often get the feeling that he realizes his character is as much a poster boy for Asperger’s as he is a flesh-and-blood person. He’s there on stage to bring Ever Montgomery to life, but he’s also there to deliver a message: “[L]ike everyone else, autistics are individuals, all unique” (to quote from the program). The character and the messenger often work against each other.

Since there are multiple messages to be delivered (mostly by Benator), sometimes there’s a timing problem with the dialogue. Often, Davis begins her reaction to one of Bentor’s lines before he’s completed the delivery, while at other times there’s one beat too many before she reacts or responds, as if wanting to make sure the audience has gotten the message. Thus, much of their interaction seems, well, staged, and it takes a great deal of suspension of disbelief to buy into the romance that all too quickly blossoms between the two. She’s a hard-headed Broadway pro – is she really going to take this man under her wing to the extent that she does?

“Dancing Lesson” is meant to be a feel-good play, and there’s no denying that the audience feels good about itself for learning more about people who must deal with Asperger’s -- thus, the dance dream sequence that comes near the end of the play. It is only after leaving the theater you might feel that you have been just a tad manipulated, and that the message that Asperger’s can be cured through the efforts of a kind and tender heart might be right up there with the idea that Santa Claus knows who’s been naughty and nice. You might also become a bit disquieted once you begin asking yourself what you were actually laughing at.

“Dancing Lessons” runs through March 1. For tickets or more information call 860-527-7838 or go to www.theaterworkshartford.org
Posted by Geary Danihy at 7:18 PM